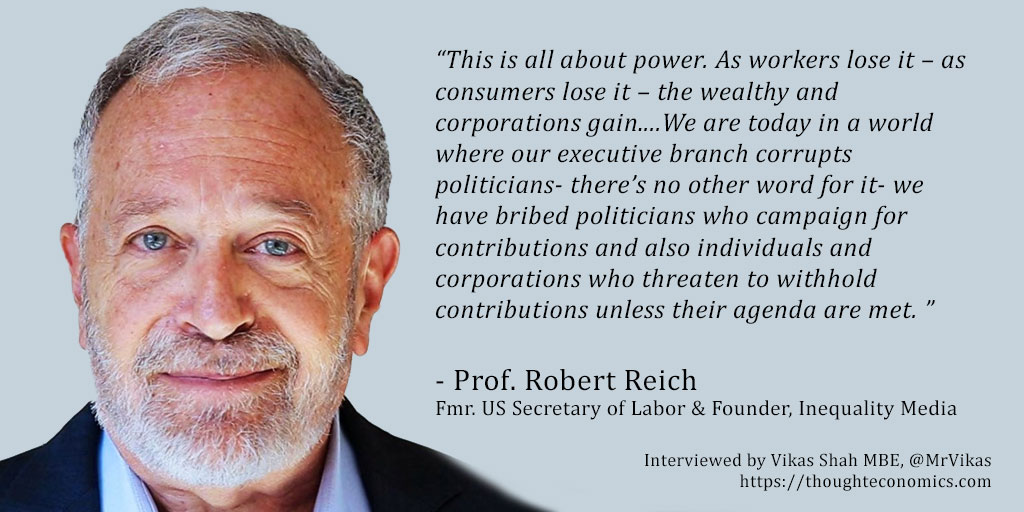 Professor Robert Reich is the co-founder of Inequality Media, Chancellor’s Professor of Public Policy at the University of California, Berkeley, and Senior Fellow at the Blum Center for Developing Economies.  He has served in three national administrations, including as Secretary of Labor in the Clinton administration.  Time Magazine named Robert one of the ten most effective cabinet secretaries of the twentieth century.

Robert has written 15 books, including the best sellers Aftershock, The Work of Nations, and Beyond Outrage, Saving Capitalism and The Common Good, Supercapitalism, and Locked in the Cabinet. He is co-creator of the award-winning film Inequality for All, and the Netflix original Saving Capitalism. Robert is also a founding editor of the American Prospect magazine and Chairman of Common Cause.

In this exclusive interview, I speak to Robert Reich about capitalism, inequality and building a society based on the common good.

Q: How well is capitalism working?

[Robert Reich]: The term ‘capitalism’ has been so degraded in terms of clear meaning that I would rather talk about what we mean by markets and how those markets are constructed and organised. The real questions we have relate to whether markets are going to be organised and enforced by democratic institutions (legislators, executives and courts that are not playing favourites) or by oligarchies. People with extraordinary power and wealth will organise and enforce markets in such a way that it benefits their wealth and adds to their power- it becomes a self-fulfilling prophecy- a vicious cycle of more wealth and power. In the United States- that is exactly what we’ve had for the past 40 years, and many other countries are following in our wake. It’s not that capitalism is failing, but rather that the organisation of capitalism is succumbing to wealth and power.

Q:  How does the organisation of capitalism affect people’s lives?

[Robert Reich]: The way markets are organised affects us in many ways- take a look at bankruptcy laws in the United States. In the past 20 years, we’ve seen substantial changes in bankruptcy laws at the behest of the biggest banks and financial institutes- changes that mean (for example) that homeowners or former-students are not able to reorganise their mortgage debts under bankruptcy.

You see this across every aspect of law- intellectual property instruments (patents, trademarks, copyrights) have been distorted, expanded and enlarged- becoming something that neither congress- nor the framers of the constitution- ever intended when they started to provide intellectual property protections. Pharmaceutical companies are getting patent extensions for years beyond their initial registration using minor changes- preventing individuals from getting access to inexpensive pharmaceuticals in a variety of ways.

Look at labour laws. It used to be relatively easy to form a union in the United States- the law was pretty clear about that. Beginning with the National Relations Act in 1935, unions were protected from a set of abuses that corporations had been using to discourage unionisation. As a result, by the 1950s, approximately 35% of the private-sector workforce in the United States were unionised. Since 1980, everything has been reversed. Corporations have used their power to undermine labour laws and protections- and now only 6.4% of the workforce in the United

Look at anti-trust laws which- until the Reagan administration– had been enforced. They were important, they busted-up large agglomerations and concentrations of economic power. Since then, they have been all-but-neglected and right now you have an extraordinary concentration of power in large corporations around the world.

This is all about power. As workers lose it – as consumers lose it – the wealthy and corporations gain. This leads to a multiplier effect as they can then use that power in the next round of negotiations with the courts and legislature. We are today in a world where our executive branch corrupts politicians- there’s no other word for it- we have bribed politicians who campaign for contributions and also individuals and corporations who threaten to withhold contributions unless their agenda are met.

Q: How are corporations using philanthropy and PR to wash their image?

[Robert Reich]: Every time corporations become afraid about legislation stopping them doing something- they unleash public relations, philanthropy and corporate social responsibility to try and create the impression that there’s no need for legislation. It’s being used by banks, corporations, the technology sector – it’s just another form of abuse of power.

Q: Do we have a meritocracy?

[Robert Reich]: Upward mobility is difficult in the United States. If you are born into the bottom 20% of the income or wealth spectrum, your chances of getting into the top 20% by income or wealth are low. As inequality widens (and inequality here in the United States is wider than any other advanced country) the advantages to being in that top 20% are overwhelming. As inequality widens the damage spills over to children, and the ladder becomes so long that you have little hope of getting too far up it in your lifetime.

America has a class system, and it’s becoming more rigid all the time.

Q:  How can we build a more equitable world?

[Robert Reich]: I hate to sound pessimistic about the possibility of positive change- the pendulum does swing. You get to a point of excess (as we did at the end of the gilded age) and there is a public reaction – the dissonance between the ideals and realities of society can become so strong that society no longer tolerates those inequities. That’s what happened in the progressive era of the United States beginning around 1901- continuing through to the 1960s- before swinging hard in the opposite direction. I don’t give-up on the possibility of the pendulum swinging once again in the opposite direction towards more social and political equity.

If we agree that the market in the United States and also- to a degree- Britain and Europe- are responsive to the wealthy, powerful and big corporations who are able to inundate the political process with money- you can see that being financially successful may have nothing to do with inherent talent or ability, but rather one’s connections and insider knowledge. The United States has more billionaires than we’ve ever had, and while you may agree that we should reward talent, innovation and disruption- the reality is that they are benefitting from rules that they- or their predecessors- had a great deal of a role in creating. The decline of anti-trust, the extension and even tax laws and laws governing the transfer of wealth from generation to generation.  To be a billionaire in America today is less a matter of merit than it is a matter of being at the right place at the right time, and being a beneficiary of a set of rules designed to benefit billionaires.

Q:  What is the type of leadership we need right now?

[Robert Reich]:  When social distrust mounts- when people feel like the game is rigged against them- they are especially vulnerable to demagogues who come along and want them to channel their rage, anxiety and distrust toward scapegoats who have nothing to do with the underlying problems but who become easy targets as methods to deflect blame. This is not new, this has been going on since time began- but we see it embodied in Donald Trump– who makes scapegoats out of African Americans, Latinos, foreigners and his political opponents by conjuring up conspiracies around deep-states. He creates a narrative where if you oppose him, you become an enemy of the state. Trump is enough of a demagogue that he can actually stir-up his followers in very dangerous ways- and he has an enabler, Fox News – his propaganda vehicle. Trump’s power rests on a three-legged stool – it’s dependent on the past 40 years of mounting distrust in institutions and the media – it’s dependent on his own showmanship, lack of principle and willingness to say anything it takes to get power – and also is dependent on the Republican Party which has become part of his cult- it no longer has separate principles other than seeing him re-elected. All of those legs work together and conspire in a way, and I hate to use that term conspire because that’s exactly what Trump is fantasising and creating in the American public’s mind.  But they are in effect colluding against the public in terms of the truth.

Q:  What can we do to turn society around in a positive way?

[Robert Reich]:  We must re-introduce civic education into schools so that people understand the institutions of democracy and the principles behind democracy. It’s not just about understanding how government works but knowing where those principles come from- so you can anchor them in history- and realise the struggles and fights it has taken to win and preserve those principles.

We must also celebrate those who exemplify the common good and who are seeking to improve society (often at great cost to themselves) whilst also continuing to criticise and call-out those with great wealth and power who are abusing their authority.

We must also elect leaders who understand the diabolical nature of this connection between wealth, power and corruption and who can reignite a sense of trust.

All of this is possible, but it will take a great-deal of work and starts with all of us agreeing that truth is a common good, not in abstraction, but as something we must elevate sufficiently that it allows us to call out lies. There is very little that matters more in democracy, than truth.

I think cynicism is dangerous – when I find anybody who basically throws up their arms and says ‘don’t bother me with the news or current events or facts or analysis or logic about what’s happening, I just can’t bear it, I don’t want to know, nothing can be done, why even bother?’, that is a self-fulfilling prophecy as well.  That’s a very dangerous position, and I think we’ve got to fight cynicism.

Q:  What gives you hope for the future?

[Robert Reich]: Despite everything, I remain an optimist. History teaches us that the pendulum always swings to correct the excesses in society. Today, we’re living through a terrible trauma, a pandemic, economic and social crises… it’s these traumas that re-educate us about the importance of government, leadership, the common good and our interdependence. It happened after the great depression, and after World War 2. Traumatic events trigger social learning.

I’ve been teaching for most of the last 40 years, and I’ve not come across a generation as dedicated to public service and the common good as my current generation of students.  They will inherit the future, and I have great confidence that they know what they must do.

Up Next: A Conversation with Abigail E. Disney on Wealth, Philanthropy, Legacy & Success.