On LGBT+ rights: A Conversation with Baroness Ruth Hunt 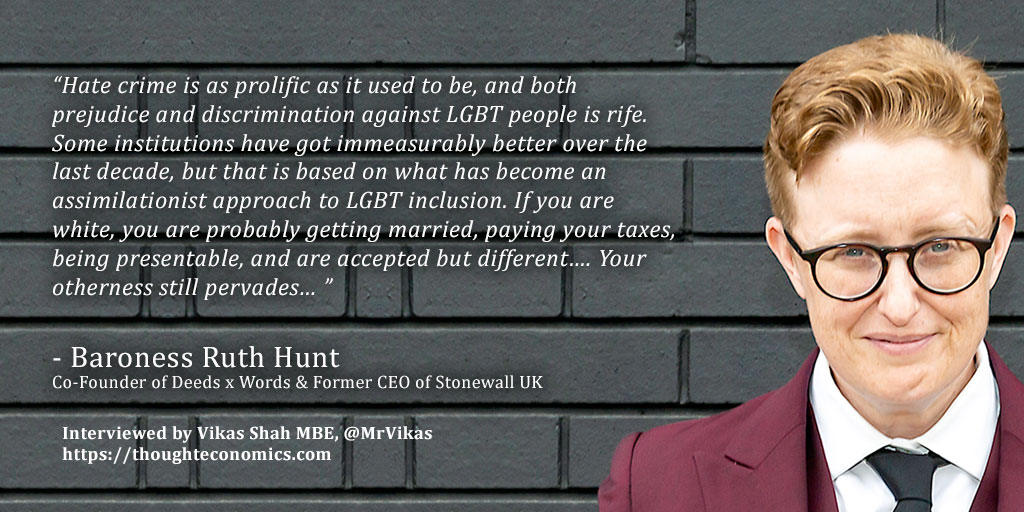 Baroness Ruth Hunt was the Chief Executive of Stonewall; the UK’s largest charity campaigning to improve equality for lesbian, gay, bisexual and transgender people. In her fourteen years with the organisation, she worked with more than 700 organisations in the UK and globally, as well as with schools, grassroots campaigners, and senior government Ministers, and led high profile, impactful campaigns. Prior to joining Stonewall, Ruth worked for Universities UK on equalities in higher education and was the President of the Oxford University Student Union. She holds an honorary fellowship from Cardiff University, and honorary degrees from Keele and Exeter. She was the Vice Chair of national homelessness charity Shelter and is currently a trustee of Engage Britain. Ruth has been appointed as a cross bench peer in the House of Lords and took up her seat in October 2019. She is the Co-Founder of Deeds x Words who work with individuals, organisations, businesses, social movements and communities to help create a shared sense of purpose.

In this exclusive interview, I speak to Ruth Hunt about the realities of discrimination against LGBT+ communities, and what we can do to move the needle forward, towards a more equitable and just society.

Q:  Why does culture discriminate on the basis of sexuality?

[Ruth Hunt]: Homophobia and transphobia are relatively modern phenomena. As they relate to British history, it was absolutely a colonial intervention to object to same-sex sexual activity- and that was as much to do with Victorian norms and moral values, rather than it being about people. If you look at subculture in India, in Native America… if you look at the animal kingdom… homosexuality is just a part of life. In the times of Henry VIII, they were closing down monasteries, and the mere suggestion that monks were having sex with each other was used as an excuse to take away their wealth in the restoration period.

Ultimately, it comes down to a fear about people being different… being the other. It’s about keeping communities alive… it’s about who’s having the babies in society!

Q:  What is the reality of discrimination against LGBTQ+ communities in the UK?

[Ruth Hunt]:  Hate crime is as prolific as it used to be, and both prejudice and discrimination against LGBT people is rife. Some institutions have got immeasurably better over the last decade, but that is based on what has become an assimilationist approach to LGBT inclusion. If you are white, you are probably getting married, paying your taxes, being presentable, and are accepted but different…. Your otherness still pervades… It’s a bit #MiddleClassProblems, but we’re looking for a new cleaner and I’ve had to drop people an email saying we’re a same-sex couple because I don’t want someone coming into the house who has a problem with that. It wasn’t an overtly political act on my part, but it’s what we must do in order to make sure people are ‘ok.’

I used to think that progress on LGBT inclusion was quite linear, but it goes in fits and starts. You take a step-back and then you shuffle forward. Just look at the extraordinary backlash against trans-people in the UK at the moment- it exposes how loosely-held the signals of acceptance are…. I certainly know people will double-check and think whether they can hold their partner’s hand on a night bus… whether they’re safe to walk down the road… whether they can come out to their parents…

We’re on more soap operas now, and we are kind of more accepted but internationally there are still 72 jurisdictions that still criminalize homosexuality.  12 can impose the death penalty for same sex intimacy, and 35 commonwealth jurisdictions criminalize private consensual sexual activity between adults.  There’s still a very clear delineation across the globe between acceptance and greater inclusion.

It’s important to give this context. We’ve made considerable progress in Europe and the UK, but this is on the basis of assimilation, on the acceptable face of gay. It’s happening internationally too- and is becoming even more polarized based on society’s views on who is good and who is bad, what is right and what is wrong. LGBT activists, particularly in countries where it’s still unlawful to be LGBT are hitting brick-walls and you need only look to Chechnya to see the consequences.

The LGBT community itself is quite insular and inward-looking, we don’t necessarily stand in solidarity with for example, heterosexual people of colour who are experiencing racism. We need to realise that all discrimination deserves our allyship.

This all relates to the importance of individual identity at the cost of our collective action, and our capacity to act collectively. That has been mirrored by a shift to the right across the globe with far more conservative (small-c conservative) approaches to human-behaviour, morals and freedoms that are also having a significant impact on heterosexual women, on birth control, on freedom of speech.  I’ve always thought that LGBT issues were almost the thin end of the wedge on quite a lot of other human rights and social libertarian issues.

Q:  How does education relate to LGBT+ equality?

[Ruth Hunt]: In the old-days, they used to teach sex and relationship education in the UK- and the Conservative government has made it relationships and sex education- so the sex component has dropped down a notch. There’s a real anxiety about teaching anything to do with LGBT issues in primary schools (as you see in protests outside schools), and there’s not enough information on how to do it in secondary schools. There’s also a class and gender divide; white gay boys are less likely to experience homophobic bullying now than they were 15 years ago whereas kids who are on free school meals, or people of color, and trans-kids are still experiencing levels of bullying we used to see 15 years ago. What we need is a comprehensive commitment from schools to tackle this head-on. Look at who is writing the curriculum- its white straight people.  And therefore, the curriculum continues to be suitable for white, straight people.

Q: What can we do to move the needle forward on the issues faced by LGBT communities?

[Ruth Hunt]:  The past 15 years have seen dramatic changes for LGBT people. Lesbian, gay and bi-people can get married, adopt and can’t be discriminated against in the provision of goods and services. There’s all-sorts of legislation now in place to protect people, though it seems less so for the trans-community.

I hope the needle will always move forward, but it depends on individuals deciding to do something active. This process is hard, messy, and you will make mistakes – but these are hard matters to solve.

Up Next: The Realities of Guantánamo Bay Prison