Close Search ×
Order the Book Subscribe Free
A Conversation with Ryan Holiday on Conquering Fear & Finding Courage in Our Lives.

A Conversation with Ryan Holiday on Conquering Fear & Finding Courage in Our Lives. 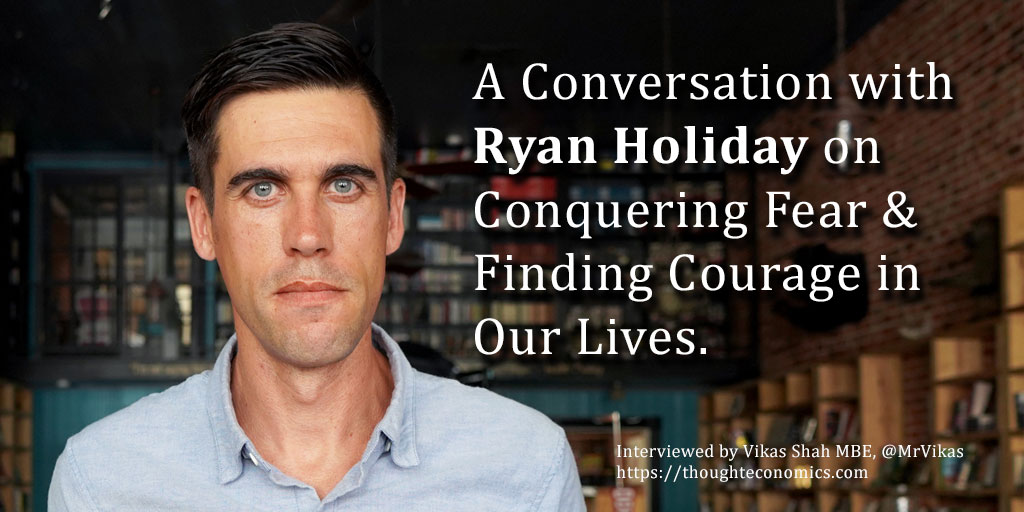 Almost every religion, spiritual practice, philosophy, and person grapples with fear. The most repeated phrase in the Bible is “Be not afraid.” The ancient Greeks spoke of Phobos, panic and terror. It is natural to feel fear, the Stoics believed, but it cannot rule you. Courage, then, is the ability to rise above fear, to do what’s right, to do what’s needed, to do what is true. And so it rests at the heart of the works of Marcus Aurelius, Aristotle, and CS Lewis, alongside temperance, justice, and wisdom.

In this interview, I speak to Ryan Holiday on how to conquer fear, resolve moral dilemmas, and practice courage in our daily lives.

Q: What is the relationship between fear and humanity?

[Ryan Holiday]:  Fear is intrinsic to our survival; it literally keeps us alive. We’re in this constant tension between self-preservation, collective progress, and the survival of our species and in that, fear serves a very real purpose. People who view their own personal safety above everything else have a tendency to survive – at the same time, people who are willing to take risks… to put themselves out there… are also the ones who end-up doing impressive things.

Q: When did humanity learn to control fear?

[Ryan Holiday]: We have not yet (as a species) learned to control fear. It’s not just the fear of the lion in the jungle stalking us… it’s the very real fear about what other people think of us… or the fear of pissing-off the crowd the mob or the tribe. If you live in a tribal society, being outcast is just as dangerous as being stalked by a lion in the jungle. It can- in fact- be the reason you become vulnerable to said lion.

For example, today’s politicians face no comparable danger to their tribal ancestors, yet they show the same self-preservation and fear instincts where matters feel like life and death, and that keeps them from often doing the right thing.

Today, we are worried about standing alone, drawing the ire of our peers or community, even though the danger has been reduced to essentially nothing compared to the life and death danger of being cast out in the society of our tribal ancestors.

Fear just finds a new thing to be scared of. People are worried about having mean things said about them on twitter… they’re worried about losing their jobs… and yes, all those things suck, and could happen, but it’s not the same as being tied-up and roasted at the stake!

Q:  What is courage – and how does it relate to fear?

[Ryan Holiday]: To have courage, you need fear. Courage is not the opposite of fear, rather it is the triumph over fear. There is nothing courageous about a guaranteed outcome, right? Courage is when the actor takes on the role everyone else was afraid to… that looked like it might be a career killer… yet which turns out to be transcendent. That is what we would call a courageous choice. The choice to be in an enormous blockbuster, or the next Steven Spielberg movie is not courageous.

Whether it’s physical or moral courage, it is ultimately a triumph over fear. It’s the willingness to put your ass on the line, to put yourself out there, to take that risk and own the successes and the consequences of the decision you make.

Courage is being yourself in a world where everyone tries to be like everyone else.

When I look at my own life- the things that I’m most embarrassed about are the moments where I acted, or didn’t act, because of fear. The moments I’m most proud of are those where I acted with some semblance of courage.

Q: How can the courage of others inspire our own?

[Ryan Holiday]:  Florence Nightingale was a typical British Victorian woman, born to a rich family, with nothing expected of her – in fact – she was expected to do nothing. When she gets called to selfless service, to be a nurse, you might think her family would be supportive, appreciative, or inspired. Instead, they had the complete opposite reaction and tried to prevent her from doing it. For Florence, it was not the courage of rushing into battle- but the courage of defying her parents and defying the stereotypes of her time. Even a brave person like Florence doesn’t just do this – she struggled for 16 years, putting it off, coming up with excuses, listening, bargaining, being deterred, being intimidated by her parents. One she did make the decision, she was ready. Was she late? Or was she preparing for the role of a lifetime.

Her story is deeply inspiring and links to Joseph Campbell’s notion of a hero’s journey. The refusal of the call is a step in the hero’s journey. The hero never gets the call and says I’m ready – there’s always a reason why we’re not ready, why we can’t, why we shouldn’t, and it can take a while to get the call again.

I think we’ve gotten too much in our own head. We’re at the mercy of academic forces that want to complicate everything so much that we are left unable to know what to do.

[Vikas: Do you think singular individuals can ever change history?]

Does the ‘great man of history’ exist? Can a singular individual change history? Well.. of course they can! First off, it’s not just men… Florence Nightingale essentially invented modern nursing, single handed. Within our parent’s lifetimes, people like Churchill and De Gaulle shaped the direction and fate of civilisation. Was luck involved? Sure. Could someone else have played a similar role? Possibly. History pivoted because of what these individuals did, and today you have some smart people gaslighting us into telling us this isn’t true… and that’s now how history works. Those same people, when a Donald Trump figure comes onto the scene- or some other toxic force- are like who’s going to save us? But they discouraged you from believing people had the power to do that.

Q: Do courageous individuals have a stronger sense of morality or value?

[Ryan Holiday]: Whether you look at De Gaulle, Churchill, Gandhi, Martin Luther King or Florence Nightingale, you see a sincerity and earnestness in their belief.

Our world today is not only superficial, but also very cynical, almost to the point of nihilism. Nothing matters, everything’s broken, it’s all bullshit. There’s a cynicism that masquerades as intelligence, but which- in reality- is a form of despair, a kind of excuse for not having to do anything.

Theodore Roosevelt grew up reading about the great men of history and decided to be just like them. The fact that he was rare, is sad. Kids want to be astronauts when they grow-up, and they end-up being accountants. We need to do a better job elevating the earnestness, commitment and ambition as countervailing forces to cynicism, nihilism, and despair.

Q: How can we know what matters?

[Ryan Holiday]: We struggle, especially in the internet age, to understand what matters. We get caught up in every tiny, miniscule outrage. We even have a word for them – we call them micro-aggressions.

I’m not saying these aggressions should just pass. Every individual should rightly be conscious of how what they say and do affects other people. Bear in mind however that there are also- today- millions of people living in concentration camps in China.

When you have an unlimited view into every awful thing that’s happening in the world, as well as every minor thing, you can become paralysed. It’s hard to know what to spend time and energy on. We get caught-up in what’s happening on Twitter instead of the bigger issues that really matter.

Churchill once spoke about some forgettable business leader from the 19th century, he said ‘he was a great man who lived in a time of small events…’ that was true in one sense, but also preposterously incorrect in another sense. There are massive injustices that exist today, which have existed since Churchill’s time, and which have not been addressed.

We choose what to focus on, and what we throw ourselves into. We decide what matters. Sometimes though, picking a thing to focus on can make you a target, and that’s why people are hesitant.

[Ryan Holiday]: Marcus Aurelius says, ‘people who long for posthumous fame forget they are not going to be around to see it…’ ­– the reality is that people in the future will be just as dumb, annoying and off-base as people who are alive today! Legacy, and the wish to be admired in history, is a worthless target. I just try to focus on doing the best work I can, while I can.

It’s interesting that you see a lot of politicians making choices that history will perhaps not judge kindly. Perhaps they should be thinking more about legacy. Our excuses today tend not to age well. Our self-interests, our desire for self-preservation… they don’t age well.

Up Next: A Conversation with Tim Leberecht on Making Business Beautiful.