Close Search ×
Order the Book Subscribe Free
A Conversation with Sathnam Sanghera on how Imperialism has Shaped Modern Britain.

A Conversation with Sathnam Sanghera on how Imperialism has Shaped Modern Britain. 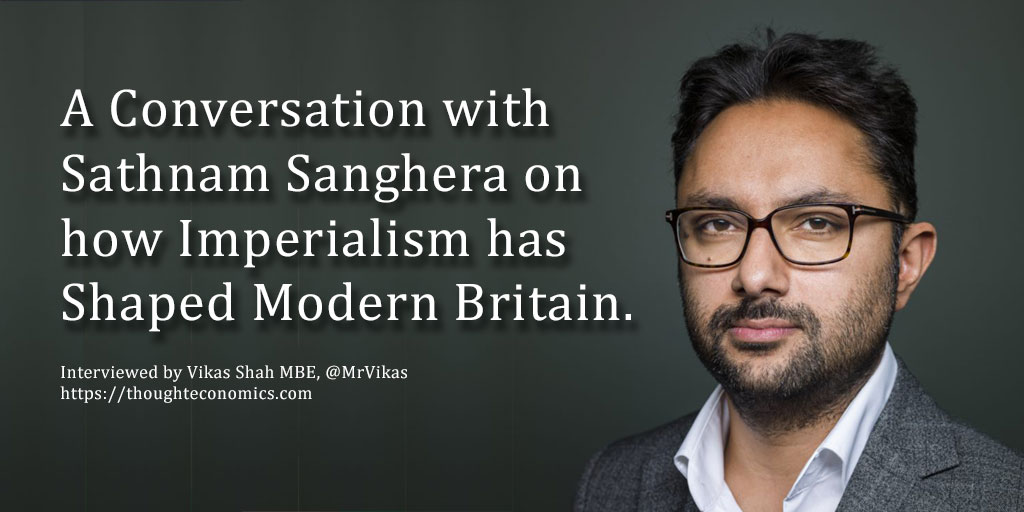 Britain as we know it is a direct product of our imperial past. And yet, empire is barely taught at school and continues to be a subject of both shame and glorification.

Covering everything from our national habits to how we live – from the foundation of the NHS, to the nature of our racism, to our economic status and our wealth – Empireland argues that imperialism is everywhere, though we often choose not to see it. It is central to the way we think and conduct politics, from the distrust of intellectuals in public life, to the exceptionalism that inspired Brexit and our response to the COVID crisis.  Sathnam Sanghera’s deeply impassioned, enlightening and unsettling book demonstrates that we see that we can only truly understand who we are by knowing who we were.

Sathnam Sanghera was born to Punjabi immigrant parents in Wolverhampton in 1976. He entered the education system unable to speak English but, after attending Wolverhampton Grammar School, graduated from Christ’s College, Cambridge with a first-class degree in English Language and Literature in 1998. He has been shortlisted for the Costa Book Awards twice, for his memoir The Boy With The Topknot and his novel Marriage Material, the former being adapted by BBC Drama in 2017 and named Mind Book of the Year in 2009. He has won numerous prizes for his journalism at The Financial Times and The Times, including Young Journalist of the Year in 2002 and Media Commentator of the Year in 2015.

In this exclusive interview, I speak to Sathnam Sanghera about his new book Empireland and how imperialism has shaped modern Britain.

Q:  What is the relationship between empire and British identity?

[Sathnam Sanghera]: We have a very strange relationship with empire, a combination of selective amnesia and nostalgia. The amnesia comes from the fact we mostly identify as the nation that won World War 2 not as the nation which had the greatest empire in human history. That helps us forget that there was at least a century where we were quite massively white supremacist and sometimes genocidal. The nostalgia comes in the form of this balance sheet view of empire… that you can take the good with the bad…. The railways against the massacres… and somehow conclude that the empire was good. That’s absurd. The empire was not a thing you buy online and give a rating too. It’s complicated. Yet, it is this latter (balance sheet) view that has been why I’ve faced a lot of hatred by just pointing out that empire could be rotten.

Imperial history covers 500 complex years without a clear beginning and end. It’s not like 2 wars of 6 years with a clear beginning, end, and victor. For us as a nation empire is also something that happened abroad, we’ve never been the ones being invaded in the modern era. As a nation, we’ve also never had to therefore face-up to the genocide, slavery and massacres that were committed. It’s quite depressing. I’m British, and I don’t want to think the worst about my country and that’s why researching this topic was so difficult, and I totally understand why people would want to look away.

Q:  How did empire shape British perceptions of race and multiculturalism?

[Sathnam Sanghera]: We’re a multicultural society because we had a multicultural empire. The reason you and I are here talking is because some English people went to India and invaded it in the 17th century. A more negative legacy however is racism… In the 1950s, 60s, 70s and 80s we had a lot of racial violence in the UK, and this can be traced back to empire. A lot of race riots in Britain started when a brown person was seen with a white woman. This goes straight back to empire and a fear of racial mixing, and the fact that white and brown people never socialised or worked together in empire. Similarly in post-war Britain, certain people weren’t allowed to do certain jobs. The issue of racial stereotypes is also important. The British decided that the Sikhs were a martial race. They published handbooks explaining why we were the martial race with comments- for example- about why our nose size was right to be fighters. Those attitudes still persist. There was a survey done and not only do Sikhs see themselves still as a martial race, but 44% of Britons believe that some races were born to be harder working than others. I think that goes back to slavery, the idea that black people wouldn’t work unless you compelled them.  That idea has been around since slavery, and it remains around in modern Britain.

Researching the story of empire didn’t make me hate Britain, rather it gave me a deeper sense of belonging because it made me realise that we (brown people) have been here for centuries. It made me realise how multicultural our society is. White people have nothing to fear from understanding their history- they’re not responsible for it. It’s like having therapy… it’s understanding our past behaviours so that we don’t repeat them.  I think we need to face up to our imperial history for the same reasons.  We need to understand what we did, so we don’t repeat the dysfunctional patterns, which is what I think is happening at the moment in things like Brexit.

[Vikas: does this link to how we’re taught about empire too?]

[Sathnam Sanghera]: I talk about Germany as a country that deals with history very well. Germany does some amazing things. They have an art scene that confronts what happened in World War 2. They have holocaust memorials. They have stumble stones outside houses which tell you the names of the Jewish families that were abducted from there and sent to their death. If you’re trained as a police officer in Germany, you get taught about Nazi history. We have none of that here. The Germans are a brilliant example of how you can confront really dark things, and it doesn’t mean you hate your country, it actually means you love it more because you’ve taken the time out to understand it.

Q: How much of Britain’s modern-day wealth comes from empire?

[Sathnam Sanghera]: It’s really complicated to work-out how much of our wealth came from empire, it’s like trying to take the egg out of a baked cake. It’s better to look at individual wealth and businesses. Shell was a company set-up by a man called Marcus Samuel who started importing shells – literally shells – from the empire. Liberty was set-up to sell Asian materials. Glasgow, Bristol and Liverpool owe much of their wealth to slavery and empire. Then you have all the country houses…. Penrhyn Castle and families such as the Pitts who produced two prime ministers. Their wealth came from a diamond, the Pitt Diamond, that was taken from India by ‘Clive of India’ who brought back the equivalent of £700 million from India.

Q:  How can we start to have a healthy conversation around empire?

[Sathnam Sanghera]: Race is the number one most controversial issue in Britain at the moment and when you talk about empire, you’re talking about white people conquering brown people and sometimes enslaving them. That’s a conversation about race, and that can get poisonous. You also have a generational divide. You have young people who feel increasingly strongly about race and who feel that colonialism was disgusting. They are getting a wider range of news and education. You also have the political right, who try to weaponize these divisions further.

The idea that if you are proud to be British you need to be proud of British history is nonsensical. Does it mean you have to be proud of all of history? Of slavery? Of abolition of you? Or me? Or Lenny Henry? You might as well be proud of biology or jelly.  It makes no sense…

Q: What are your views on the removal of statues?

[Sathnam Sanghera]: Statues don’t matter as a colonial legacy as much as racism, our politics and our economics that matter more. Statues are street furniture. The arguments they have provoked are interesting, but the statues themselves are not – remove them, keep them, I don’t care. In general, I think the answer is not to tear them down but to contextualise them and also build statues of all the brown imperial figures who have been forgotten. With museums too, there’s a notion that if we start returning things, that our museums will be empty. The British Museum has 1% of its artifacts on display- even if we handed back every single artifact that another government wants back- we would still have 99.9% of the artifacts left. I think there’s no harm in actually having scholarship around this, giving stuff back but in a very intelligent way.

Q: Do we need to think about reparations for our colonial wrongs?

Q: How has the journey of Empireland shaped your own identity?

[Sathnam Sanghera]: As a Sikh, I have a particular emotional view of empire in the sense that Sikhs were very much involved with imperialists. We took the side of the British in the mutiny. We fought in huge numbers in both world wars. Sikhs have been indulged as much as they have been subjugated and murdered when necessary, such as at Jallianwala Bagh or the Anglo-Sikh wars. I feel like I’m between the two extremes and understanding empire has not just helped me understand myself, but also what my parents went through with racial violence in the 1970s and 80s. Don’t forget that Sikhs in the 1960s and 70s weren’t even allowed to buy houses sometimes. They weren’t even allowed to have council houses in certain parts of Wolverhampton, and that goes straight back to empire when brown people lived separately from white people.  Understanding all of this absolutely helped me understand myself.  And it can only be a positive thing if people read imperial history.

Up Next: A Conversation with Peter Diamandis on How Technology is Transforming Every Aspect of our Lives.