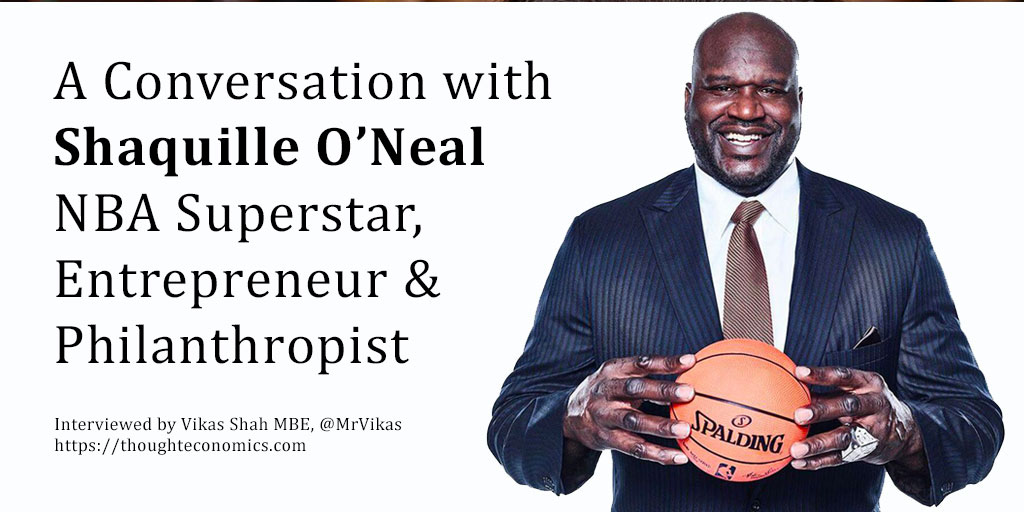 Shaquille O’Neal (Shaq) is considered to be one of the most dominant basketball players in NBA history.  At 7 ft 1 in tall and weighing 325 pounds, Shaq’s larger-than-life personality and powerful athleticism have resulted in worldwide adulation and one of the most passionate fan bases in sports and entertainment.

Shaquille O’Neal’s off-court accolades rival his athletic accomplishments, having found success in entrepreneurship, acting, music, television and gaming. Currently, Shaq is an analyst on Inside The NBA. Philanthropically, Shaquille has raised millions of dollars for charity. He is a national spokesperson for the Boys & Girls Clubs of America, of which his relationship dates back to his youth in New Jersey. He is also a member of the national Board of Directors for Communities in Schools. In 2019, Shaquille established The Shaquille O’Neal Foundation.

In this exclusive interview, I spoke to Shaquille O’Neal (Shaq) about his life in basketball, what it takes to achieve greatness, his entrepreneurship, philanthropy and how we can all be a bit more Shaq.

Q: what does it take to achieve greatness in a sport like Basketball?

[Shaquille O’Neal]:  It’s not about what I achieved, it’s about what the great ones before me achieved. I just wanted to be respected in the same way as Magic Johnson, Julius Erving and Kareem Abdul-Jabbar. People love sports – you have football fans, basketball fans and baseball fans… for hard-working people like you and me, we go through our 6-7 hours a day at work, and we need a few hours of enjoyment. That’s where sports come in. People like to watch others compete – they like to watch the aerial moves that basketball players display, and it’s fun! When you have great players, playing a great sport and creating great moments – that comes together to make everything great.

Q:  What does it mean to you to achieve greatness?

[Shaquille O’Neal]: to achieve greatness means to maximise your potential at the highest possible level, and the highest possible rate. I don’t really consider myself the best, but the fact that people consider me the best I take as a great honour and as testament to the hard work and what I was able to achieve. I’m not the best, I’ve never considered myself the best, you know. The fact that people think I was the best just shows that I’m a tireless worker, I never stopped working and never stopped believing.

Growing up, I said to myself that I had a ‘basketball name.’ My mom was like, ‘what do you mean?’ and I said, ‘…it just flows – Larry Bird, Magic Johnson, Michael Jordan, Kobe Bryant, Lebron James, Shaquille O’Neal… i think I can make something out of this!’ Now that I’m retired from the game, I just want to have a positive impact on the world. I just want to make people smile.

Q: What was the role that money played in your career?

[Shaquille O’Neal]:  When you have the love and passion to do something, you take everything that comes with it – good and bad. I would have played basketball for $120,000 for 7 years rather than $120 million, because I loved to play basketball.

[Vikas: What about in your business career?]

[Shaquille O’Neal]:  Jeff Bezos said that if you invest in things that change people’s lives, it’s always good. When I first started investing in business- I wanted to get rich quick. Once I started investing in stuff that people needed – technology, education, medical stuff, Ring, Google and others- the monetary rewards have bene double and triple what I used to get.

Q:  How do you approach your philanthropy?

I just like to make people laugh and make them smile. I try to find out what they need and take care of it. I don’t like to talk about my philanthropy work and say, ‘I did this… I did that…’ it’s not important. What’s important is that you helped the people that needed to be helped.

Q:  Do you feel an obligation as a role model for young people?

[Shaquille O’Neal]: I’m just trying to lead by example. A lot of times you can tell kids, do this, do that but they don’t have the same circumstances as you. They won’t understand. If a kid has been struggling the whole year- he may be making money a certain way – you can’t just tell them no, no, no, don’t do that… you have to understand their circumstances. Everyone going to do what’s best for them. I try to lead by example, tell stories they can relate to and give them hope.

Q:  How should we see failure and criticism?

[Shaquille O’Neal]:  Before you succeed, you must first learn to fail. If you keep repeating the same thing, you’re always going to fail, you need to adjust… what people like about great athletes is that we adjust on the fly ‘he hits the ball… oh my god, the outfielder, he jumps! …. David Beckham… we’ve got 3 guys coming to him…. He puts it between their legs!’

We adjust on the fly and we learn to adjust. We have to look at failures and use them as an educational tool. Why did you fail? … oh, you did this, this and that…. Next time do it differently!

Q: What do you look for in businesses that you invest in?

[Shaquille O’Neal]:  I follow the Jeff Bezos pattern; I want to invest in things that change people’s lives. Also, I need to respect that business – is it a product I’ve used? Is it something I’m about to use? I always do my due diligence too. If someone came to me and said, ‘hey, give me a million dollars and I’ll turn it into 10 million in 2 months…’ I wouldn’t take it. If someone came to me and said, ‘hey, these glasses will be able to look at paper and translate language or scan that to your phone?’ that’s different that changes people’s lives. I love technology!

[Shaquille O’Neal]: I just want people to say Shaq was a nice guy. With social media, Google, Bing and all that- people know what I’ve done, what I haven’t done, how much I’ve made, and how much I’ve lost. That’s not important. I want them to say, ‘hey, I met Shaq at the CVS by himself, no entourage, he was the nicest guy…’ or ‘hey, I met Shaq, my grandmother needed a wheelchair and Shaq found out about it and the next thing I know a wheelchair showed up at my house…’ or ‘hey, I was having problems paying my college tuition and Shaq took care of it’ or ‘hey, a kid was accidentally shot in his neighbourhood and Shaq paid for the funeral for the family’ – that is what matters to me.

Hey, I was having problems paying my college tuition and Shaq took care of it.  Hey a kid was accidentally shot in his neighbourhood, Shaq paid for the funeral for the family.  Stuff like that matters more to me.

Q:  What can we learn from your life?

A lot of times- especially now- you’ve got people saying, ‘don’t wear those glasses? Oh, you have a light blue shirt with a collar? Well button up and wear a tie!’ – no, you know what? It’s okay to look the way you look.

So, the name of my book would be ‘it’s okay’ – it’s okay that people are different as long as you always have respect. I respect every woman, man, child, race and religion – I respect you. It’s okay that we have differences. A lot of people don’t like having differences these days because of social media. Everyone wants to be right. Everyone wants specific things, forget everything else. You know what, sometimes you have to listen before you talk.

[Vikas: thank you for your time today Shaq]

[Shaquille O’Neal]: I know who you are brother, and I’ll talk to you soon.

Up Next: Learning About Ourselves Using Technology