A Conversation with Sheryl Sandberg on Resilience 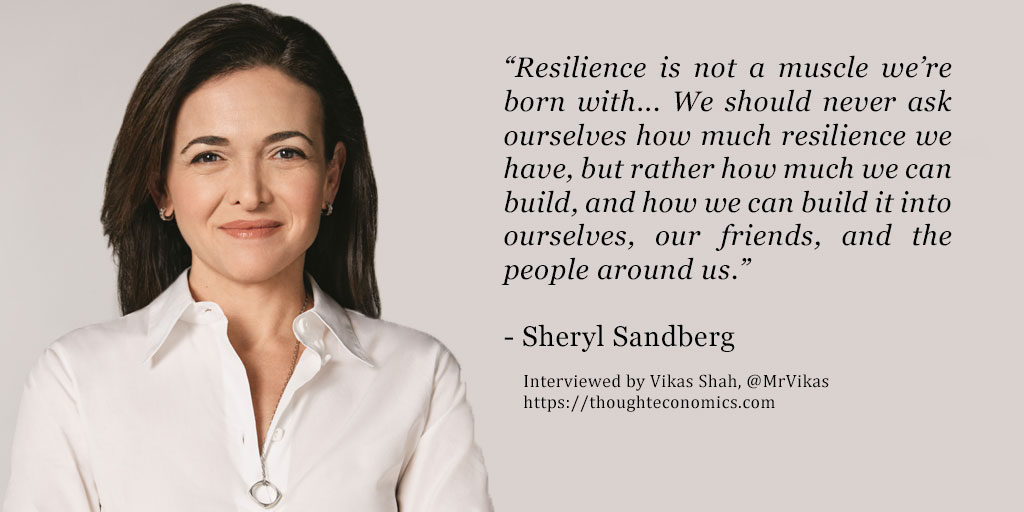 Being completely honest about it, we shouldn’t be here.  I don’t mean you, or me, but all of us.  We are a relatively new branch of the evolutionary tree, and one which is neither the strongest, fastest or hardiest.  Yet, we have persisted to create the Anthropocene; perhaps the first species to have been able to significantly impact the geology and ecosystem of the entire planet.

The secret to why our species has endured is the shared narrative to every one of our success stories as individuals, families, communities, companies and nations; resilience.

In the broadest sense, resilience is defined as, ‘the capacity of a system, enterprise, or person to maintain its core purpose and integrity in the face of dramatically changed circumstances…’ and if we reflect on that even within our own lives, we will find that our successes have been as a result of overcoming adversity, challenging circumstances, and bouncing back from dramatic changes.

Sheryl Sandberg is a remarkable person.  Alongside leading a $500 billion business, with 24,000 employees and 2 billion monthly active users, she has mobilised millions of women around the world to achieve their ambitions and fight for a more gender equal society.  Sheryl’s own story of resilience came to light following the sudden death of her husband in 2015, and her subsequent journey to recover, rebound and flourish again.

Sheryl is Chief Operating Officer at Facebook, Founder of LeanIn.Org and OptionB.Org and I caught up with her to learn about resilience.

Q: How can companies create a culture of discussion around adversity?

[Sheryl Sandberg]:  My friend Kim Scott was an executive at Google.  She had this thing called, ‘Whoops the Monkey!’, where every single week she would have her team come together and say what the biggest mistake was that someone had made.  And by a show of hands, someone would get the monkey on their desk.  Think about that.  Everyone says, ‘oh it’s fine to make mistakes, it’s fine to do things wrong’.  But actually? making that true is really difficult.  And with that one intervention, she did it.  And that’s a pretty incredible thing.  I think that’s a really good example.

Q: Is there a link between how we face adversity and bias?

[Sheryl Sandberg]:  At Facebook we share our managing bias training- and one of the things we notice is that a lot of companies have bias training publicly available.  Here’s the thing… in most cases, when you actually went to the training, they didn’t talk about the biases.  They would say things like ‘people are biased, and we have to fight it,’ but they were afraid to say what those biases were.

Biases are playing out each and every day in business.  People may think men are more competent than women- people may think groups that have historically been discriminated against are not as smart.

Experiments show that these biases are alive and well, and that resumes with black sounding names, female names, that indicate the applicant has children…. All these factors can mean the individual gets fewer call-backs or will get recommended for fewer jobs.   That’s bias.

We have to stop pretending that there’s no adversity, or that we can’t do anything about the adversity we face.  We need to fix the culture of silence and ignorance surrounding bias and adversity.

Q: Is resilience a community responsibility?

[Sheryl Sandberg]:  Resilience is the responsibility and opportunity of the community.

Let me give you just one example that’s not necessarily obvious.  Around the holidays, it can be extremely hard for people who are facing this time of year for the first time without a loved one.  And what do we do about that?  What we normally do is just ignore it.  I think not ignoring it and acknowledging ‘oh the holidays are hard’ is a really important thing to do well, and nobody seems to.

We have to explicitly face the fact that resilience is the responsibility of all of us, together.

Q: What have you learned about yourself from facing adversity?

The real ‘a-ha!’ moment of my experience was realising that resilience is not a muscle we’re born with, it’s something we have to build and believe in over time.  We should never ask ourselves how much resilience we have, but rather how much we can build, and how we can build it into ourselves, our friends, and the people around us.

Sheryl Sandberg is chief operating officer at Facebook, overseeing the firm’s business operations. Prior to Facebook, Sheryl was vice president of Global Online Sales and Operations at Google, chief of staff for the United States Treasury Department under President Clinton, a management consultant with McKinsey & Company, and an economist with the World Bank.

Sheryl is the co-author of Option B: Facing Adversity, Building Resilience, and Finding Joy with Wharton professor and bestselling author Adam Grant. She is also the author of the bestsellers Lean In: Women, Work, and the Will to Lead and Lean In for Graduates. She is the founder of the Sheryl Sandberg & Dave Goldberg Family Foundation, a nonprofit organization that works to build a more equal and resilient world through two key initiatives, LeanIn.Org and OptionB.Org. Sheryl serves on the boards of Facebook, the Walt Disney Company, Women for Women International, ONE, and SurveyMonkey.  Sheryl lives in Menlo Park with her son and daughter.

Up Next: The Sleep Revolution We Need