A Conversation with Siddharth Roy Kapur 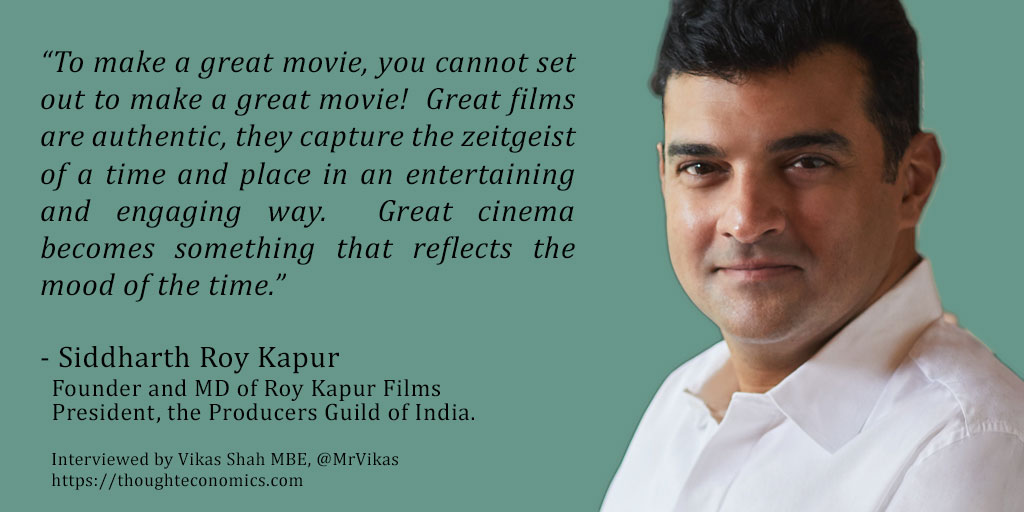 Siddharth Roy Kapur is an eminent film producer, founder and MD of Roy Kapur Films and the President of the Producers Guild of India. He has been the former Managing Director of the Walt Disney Company India and UTV – Studios. Siddharth’s filmography includes some of the highest grossing Indian films of all time like Dangal, PK, Chennai Express, Kick and Rowdy Rathore as well as genre-defining films like Rang De Basanti, Barfi, Dev D, A Wednesday, Kai Po Che and ABCD. He has been regularly featured in Variety’s Top 500 list of influential people in entertainment globally and The Hollywood Reporter’s Next Generation Asia Inaugural Class of Young Leaders, among numerous other accolades for his leadership and achievements.

I caught up with Siddharth to learn more about Bollywood and how he’s made some of the most iconic films of Indian cinema.

Q:  What is the relationship of cinema to culture in India?

[Siddharth Roy Kapur]:  Indian cinema has been in existence for more than 100 years, and for most of that time it has been really the primary mode of mass-entertainment for our country.  India has, for a long time, been a very poor country and it’s only in the past decade and a half that we’ve been able to pull a fair number of people above the poverty line; but we have a long way to go.   In an environment like that, cinema formed a means of escapism for people, from what they had to go through in their daily lives – don’t forget, life was tough.  Those three hours in a movie theatre gave people a chance to forget their woes and become one with their hero or heroine on screen. That is also perhaps why so much of our cinema has been escapist entertainment’ people’s lives were hard enough without them having to deal with those same harsh realities on screen.

Cinema is integral to Indian culture, has deep roots in daily life, and regardless of the platform- has just as much resonance today than at any time before

[Siddharth Roy Kapur]:  Even in the 1940s, 50s and 70s we had plenty of films that spoke to the taboos of society, but today we’re seeing a much greater diversity of subjects in Indian cinema than we’ve had before. Traditionally Indian cinema has had to be all things to all people,  films had to have a mix of romance, tragedy, comedy, great songs, dances, an imposing villain, gorgeous stars and great locations; for a film to be successful, it had to have all of that – and that’s the Bollywood genre, right?

As tastes have widened, and we’re exposed to more global cinema – people have moved to a level where they’re ready to be able to enjoy something that is not just escapism; you are dealing with subjects that talk to society as it is today; and while the escapist fair still does extremely well, you now have a whole other array of commercial cinema that deals with subjects which- just a few years ago- would have been relegated to arthouse cinema or parallel cinema.

Q:  What does it take to make an iconic movie?

[Siddharth Roy Kapur]:  To make a great movie, you cannot set out to make a great movie!  If you try and reverse engineer the best films and just reconstruct the principles, you simply find it doesn’t work like that.   Great films are authentic, they capture the zeitgeist of a time and place in an entertaining and engaging way.  Great cinema becomes something that reflects the mood of the time.  Look at Rang De Basanti, a film which spoke about students today not having to look up to icons in the way they did during the freedom movement, taking the law into their own hands and becoming anarchists at a time the system was failing.   That seemed to touch a chord, as did Dev. D, a film that was really about Devdas (it was the 4th or 5th rendition of that celebrated novel, but spoke to the question of what would happen if Devdas existed today…).  Dev D was sex, drugs and rock & roll – it captured the mood of the nation.  You then have Delhi Belly, a film filled with profanity, craziness, madness – something that our youth had only previously seen from Western cinema.   All of these films are great but were created organically, with their writers feeling the subject and the time, with writers projecting their own creativity and sensibility… these great films came from the way the writers looked at the world rather than them deciding to set out to make a great film.

Q: What does it take to be a great actor/actress?

[Siddharth Roy Kapur]:  Well, there is a baseline – you have to be able to act! *laughs*

What you see is that there are lots of great actors and actresses, but very few stars.  It is that indefinable quality of someone who becomes iconic that people want to come and watch regardless of the type of film they’re in, the genre, or the role.  That is when you know the person is a bona fide movie star.  That kind of growth to iconic status happens over a period of time where the actor or actress has constantly delivered movies that appeal to people, has connected with people… and is the type of person that people aspire to be.

You can have many great actors but you have very few who really become movie stars.

[Siddharth Roy Kapur]:  Digital culture is at its infancy in India, but soon – these ripples will create an impact on the Indian mass-audience.  Social media has also demystified movie stars; earlier you would hunger to know what the private life of your favorite star was all about – what their lives were like off the screen – today, you can access that 24/7.  The digital world has also democratized content – it’s now available on every platform all the time – and we’re going to see a whole raft of new stars, because talent can be rewarded.

It could dilute our ‘star’ system in India, but I don’t think it will ever go away – we always look to icons and role models, people we can aspire to be…

Q:  What is the role of music in movies?

[Siddharth Roy Kapur]:  Indian movies have always used music in their narratives extremely effectively and extensively.  While the way it’s used may change (we don’t have that many playback songs anymore with lip-sync….), we still have those musical underlays to movie sequences that bring out the stories and help the writer to tell the story they want to on screen.

Q:  What are the common misconceptions about Bollywood?

[Siddharth Roy Kapur]:  Outside of the South Asian diaspora, perhaps in the general Western and Far Eastern audience; there is some general understanding of what Indian cinema is, and how it’s evolved from that kitschy, psychedelic Bollywood stereotype. We still make those kitschy films, and are very proud of them, but cinema in India has evolved to tell stories in diverse, interesting narratives.  It’s about today’s India, about the cultures and people of India, about the real world of today – not just the world of the 1970s and 80s.

Q:  What does cinema mean to you?

[Siddharth Roy Kapur]:  I always wanted to be involved in the movies, I just didn’t know how to go about it.  The cinema industry tends to be a place you are born into, a bit incestuous, and a place you got into because of who you know rather than through merit and competition (though there are notable exceptions).  I always had an aspiration though – and grew up movie-mad.  I loved the movies – and was reading trade magazines from when I was just a child.  It was always my dream to be involved in the industry, and I’m so happy that it happened!

Up Next: Blowing bubbles and capturing them in real time