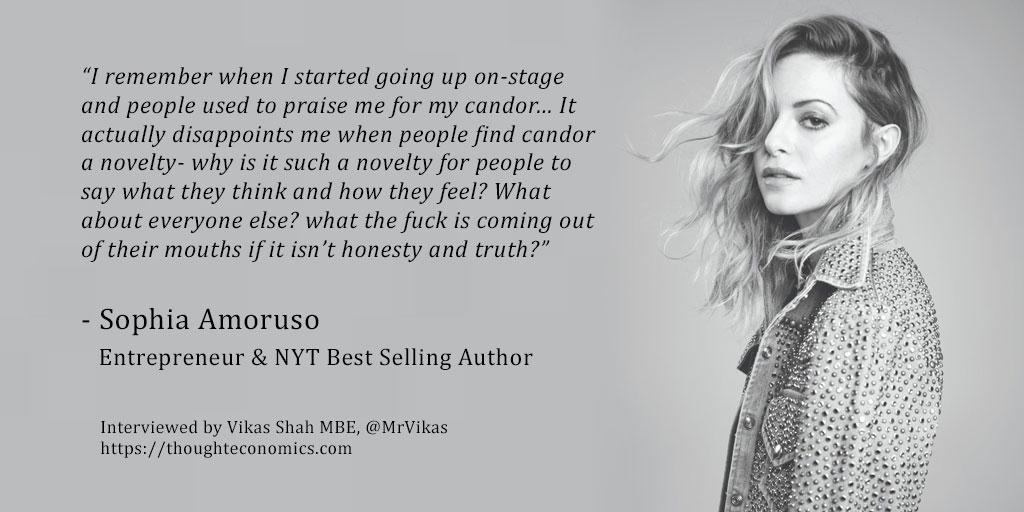 Sophia Amoruso is the Founder of Girlboss, a professional network for ambitious women. Her 2014 New York Times Bestseller #GIRLBOSS, which chronicled her early life as well as her experience as the founder of fashion empire Nasty Gal, was adapted into a scripted TV series that premiered on Netflix in 2017. Sophia is also the author of Nasty Galaxy and the Girlboss Workbook. She has been featured on the Fortune 40 under 40, Forbes 30 under 30, Inc. 30 under 30, Fast Company Most Creative People in Business lists, and named one of Forbes’ Richest Self-Made Women, covering its June 2016 issue.

In this exclusive interview I speak to Sophia about her journey in scale-up entrepreneurship, building resilience, and redefining success.

Q:  How did entrepreneurship come into your life?

[Sophia Amoruso]: The only way I can get truly invested in something is by doing it and understanding the full-stack of why and how it works, rather than playing a role in it- it’s why I was so bad at working for other people… I learn through immersion (which is perhaps why the educational system failed me) – and the little eBay store I started allowed me, step by step, to immerse myself in this world of business. Every small change I made improved my performance, and I grew from there.

You know, from a young age I knew I wanted to be good at something, not just good in general, but good for my age- but the challenge was I didn’t have a single recognisable talent! My friends were great musicians, and doing big things, getting recognition. I had no idea what that ‘thing’ would be for me, and I certainly didn’t think would be finding old clothes in a thrift store, taking photos of them, writing copy, and cobbling together a brand that made a lot of women really happy.

Q:  When did you first realise your idea had scale potential?

[Sophia Amoruso]: I do this thing- I say something out-loud–announce it to the public–and then I’m forced to do it because people are excited and I don’t want to let them down.

So in 2016,I got kicked off eBay and was forced to launch my own website ‘Nasty Gal Vintage.’ I had started promoting outside eBay through my own MySpace profile and had- for a while- been sending notes to my eBay customers saying ‘thank you for your purchase, stay tuned for nastygalvintage.com’ (which was part of the reason I got kicked off!). I’d been building a brand, and whilst I didn’t want to leave eBay; getting kicked-off forced me to launch my brand, and allowed me to own my customer relationships. When I launched the website, I had no idea what would happen-I had no traffic! I had 150 items for sale- just one of each thing, such is the case with vintage. Everything sold-out overnight. Restocking meant trailing through thrift stores and sales, taking photos of items, hiring models, styling the goods, editing the photos, writing descriptions, weighing items, dispatching… the margins were huge (I’d sometimes buy something for $8, and sell it for $200), but ultimately it wasn’t scaleable. I started going to trade shows and bought styles I liked, and things I thought my customers would like. I started small, and 3 items became 30, and so on-and it grew from there, and well… the rest is history!

Q:  What has been your relationship with wealth?

[Sophia Amoruso]: When the business started to scale, it was such a ride… and I [personally] didn’t know what luxury was. I knew the brands: Gucci, St. Laurent, and was selling them as vintage items, but I had no idea who a luxury customer was. I still wore vintage clothes, still drove my ’87 Volvo, and whilst money was motivating, seeing myself improve every day, watching business grow was really my primary motivation. And, of course, seeing a community of people grow who were obsessed with the brand was just incredible, such a special thing. Money only came into play for me when venture capital came in. I had maybe a $100k salary before then. It was 2012, and I’d bootstrapped the business to $30 million, profitably, with no investors and no debt. Venture capitalists came in and put $50 million into the business, and at that point I took some money off the table. And it was life changing. I went from driving a compact Nissan SUV to a Porsche Panamera.I was buying oysters for everyone! I was in my 20s, it was wild, and I got wildly disconnected from everything.I went from knowing the value of a dollar to forgetting the difference between $10,000 and $30,000 because everything was expensive. I didn’t know how much things actually cost-I’d never bought expensive things. I certainly I got hoodwinked sometimes: people would Google me and the business and charge me astronomical prices. And I was naive enough to pay them, I reinvested $2 million back into Nasty Gal close to the end of the business, that I’ll never see that again. But hey, they say that money comes and money goes.

When I founded Girlboss, I was motivated by this incredible community of women who had taken the book and turned it into something else. I made some money from the book, I didn’t make much from the podcast, but I understood enterprise value. But I understood the value of the intellectual property Girlboss held. Girlboss could easily have remained a personal brand- but when I started, I had a chip on my shoulder and wanted to prove something (to myself mostly) – I wanted to prove that I could pull something off because Nasty Gal didn’t end well. At Girlboss, I built an incredible business, with a great culture, a team I really loved- I couldn’t have been more proud of it, and I actually pulled off an exit…. It was a very different journey.

Q:  What has been the role of mindset in your journey?

[Sophia Amoruso]: I think overconfident founders get a lot of flack, but you have to shoot for the stars to really manifest your dreams. I think about things asymmetrically; I connect things that aren’t necessarily related, which sometimes creates radical outcomes. The amount of thinking I do is pretty excessive but ultimately results in great outcomes.

I actually encrypt my wishes and goals into the things I do.There are creative ways for each of us to embed our wishes into our daily lives, but we have to set those wishes to start with. It doesn’t work to put things out to the world, and hang on to them so tightly that you suffocate their potential. We can’t control the outcomes, but we can send out cryptic prayers without expectation. – That’s when things really begin to manifest.

Q: How do you build resilience, and bounce back from failure?

When you keep moving, the wind moves behind you, and you leave behind who you once were and move towards something new.

Resilience for me has also been rooted in necessity. Listen,I have a beautiful home, all the food I need, three poodles, but I’m not retired. I need to work, and I enjoy it.. and that’s one of the reasons I moved on quickly from the collapse of my first business.

I’ve also learned to invest in my mental health. For years, I’ve gone to therapy twice a week. I also value different things now. When it comes to money, I’ve sat by all the infinity pools I need and I don’t have a single memory of sitting by one.. Luxury is also kind of gross to me now. It was OK to me then, but I’ve gained an understanding now of how superficial “stuff” can be, and how easy it is to become complicit in our consumer culture. And hey, it’s a lesson that saves me a lot of money!

Q: What does success mean to you now?

[Sophia Amoruso]: Success means having a lifestyle that I enjoy. It means slowing down,  enjoying what I do, and having as few stakeholders as possible. I don’t want a bunch of investors. I don’t want a ton of employees. I want to bootstrap whatever I do next, have time with my family,be healthy, and I want to be fed, that’s it.

Sophia Amoruso is a creative visionary, entrepreneur, and industry disruptor who has forged an unprecedented path in building modern brands. Amoruso is the Founder of Girlboss, a professional social network for ambitious women. Previously, Amoruso was the founder of Nasty Gal, a fashion startup she grew to over $100 million in revenue. Named by Forbes as “Fashion’s New Phenom” and featured on the cover of its June 2016 “Richest Self Made Women” issue, Amoruso has evolved from one of the most prominent figures in retail to a cultural thought leader.

Amoruso is the author of the New York Times 18-week best-seller #GIRLBOSS, which was published on May 6, 2014 and has since sold more than 600,000 copies worldwide and been published in 30 languages. Part memoir and part business book, #GIRLBOSS takes the reader through a journey of an accidental entrepreneur and shares Amoruso’s learnings building her company.

In October 2015, Amoruso debuted her podcast, Girlboss Radio, which has grown to more than 700,000 monthly downloads. In October 2016, Amoruso released her second book NASTY GALAXY, a graphic, visually led book that binds together Amoruso’s inspiration as well as the the Girlboss ethos.

Netflix has since adapted #GIRLBOSS into a 13-episode scripted comedy series written by Kay Cannon, with Charlize Theron and Amoruso serving as Executive Producers.

Girlboss premiered in April of 2017 to 95 million Netflix subscribers in 195 countries. Amoruso released her third publication, The Girlboss Workbook, on October 24, 2017.

In 2017, Amoruso announced the formation of her second startup, Girlboss, raising $3.1 million from Lightspeed Ventures, Gary Vaynerchuk, Brian Lee (Honest Co.), Slow Ventures, and others, to galvanize the 17-million-hashtag-strong brand into the zeitgeist-driver it has become. In 2018, Initialized Capital, which was co-founded by Alexis Ohanian, led the brand’s latest fundraise of $3.5 million, bringing the total raised to $6.6 million.

In 2019, at the fifth Girlboss Rally, in front of 1800 attendees, Amoruso unveiled the new Girlboss.com, a digital professional network that embraces the ambitions of the modern woman, supporting a new generation.

Up Next: A Conversation with Entrepreneur & Philanthropist, Bonnie Comley, 3x Tony Award Winning CEO of BroadwayHD.