The Arrogance of Globalisation 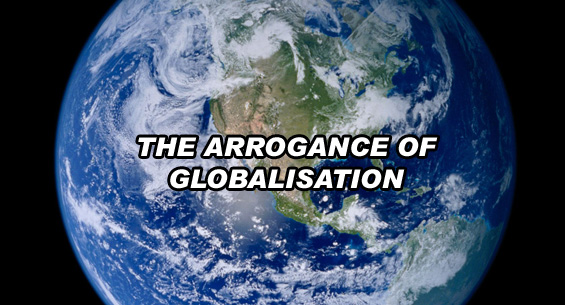 On March 29th 2010, The Economist reported that, “When the trials of four Rio Tinto employees opened in Shanghai last week, their guilty pleas to the first of the charges, of bribe-taking, dampened hopes that the matter might be settled without any severe penalties. Even so, the harshness of sentences handed down on Monday March 29th was unexpected. The mining giant’s four executives—three Chinese, one an Australian of Chinese descent—were jailed for between seven and 14 years for bribery and theft of commercial secrets (only one of them admitted the second charge). Australia called the sentences tough “by any measure”. But it appears there is little it is able or willing to do about them.”

In my last piece, “Business Without Borders”, I discussed how, “We now have a global theatre in which consumers exist independently of their country, and organisations can provide their services free of similar borders.  This will not only increase the level of choice for consumers (an enabling factor) but will also increase competition and (invariably) innovation.  If anyone doubts the power of this phenomenon, one has to only look at the growth of Google Inc from a $100,000 cheque in 1998, to a market capitalisation of over USD 172 billion just twelve years later.”

Globalisation, as we see it now, allows companies to expand and integrate across markets in a way which gives the impression that markets exist in a state of pseudo-independence from sovereign bodies.

This impression of pseudo-independence also creates a form of Moral Hazard (which is defined as occurring when a party insulated from risk may behave differently than it would behave if it were fully exposed to the risk).  In context, this means that organisations will often behave in international economic theatres (such as China) with the same operational processes and assumptions as their ‘home’ environments (such as Australia) with the assumed protection of the legal, political and other systems of their ‘home’ environments.

It is important at this stage to also understand why organisations behave the way they do.  In many industries (especially well-established markets such as energy and retail) the incumbent business behaviours they exhibit (particularly at senior levels) have been established over many years, and (particularly for larger organisations) extend into opaque networks such as university alumni, political organisations and so forth where, as some commentators have stated, ‘the real business is done’.

This lack of transparency has meant that many businesses have continued business practices which are simply not acceptable.  Daimler recently had to pay fines of over USD 185m as they were accused (by the securities commission) of having “…made at least $56 million in improper payments over more than a decade in at least 22 countries to illicitly earn at least $90 million in profits through tainted sales of 6,300 commercial vehicles and 500 passenger cars. It said bribes were paid to win sales to governments in Russia, China, Vietnam, Nigeria, Hungary, Latvia, Croatia and Bosnia, among others.”

In the past quarter century, globalisation has introduced a greater level of transparency in all industries, meaning that phenomenon such as nepotism, oligarchy, cronyism, plutocracy and so forth are all challenged, as organisations are encouraged by their stake-holders and the wider community to be more meritocratic in their behaviours.  This increase in transparency has also meant that business practices and corruption which (while unacceptable) may have been ‘part of the course’ are being brought to the attention of the public meaning that sovereign bodies who may have tolerated (and even encouraged) such practices must ‘show face’ by aggressively challenging them.  It would, in that circumstance, be inappropriate and unjustified for a companies home government (such as Australia, in the case of Rio Tinto) to intervene and assist those charged.  Diplomatically, this would be seen as the home government supporting these business practices as being acceptable.

It is probable that we will see many more of these cases come to light in forthcoming years, as the incumbent generation of senior managers are replaced by a generation with a less tolerant view of these practices, meaning that those firms will, invariably, be held to account for their past actions.

When assessing the nature of ones operations in an economic theatre, it is also important to consider the motives of the country attracting investment.  India and China, for example, are strong viable and established economies who need foreign investment not necessarily to support their economic growth, but also to absorb the knowledge and skills the investment brings (and even sometimes to support trade balances or currency valuations).  In other cases, we see countries in earlier stages of economic growth attracting foreign investors in a genuine attempt to support their economies.  Cambodia, for example, “…is trying to encourage international investment by relaxing laws on property ownership by foreigners in an attempt to lift prices that have fallen as much as 40 per cent in the wake of the global recession.”

In this latter case, while governments may be more susceptible to corruption and opaque practices to encourage economic growth, one can see that as they become stronger, their attitudes change, and these practices are rightly eliminated.

The lesson here is that we are moving towards a global theatre where even though each actor (country) may be at different levels of economic growth, the technologies which exist to enable the globalisation stimulate high levels of transparency, meaning that each agent (companies, customers, suppliers, politicians, etc) will be accountable for their practices, and so must act with greater consideration (and less arrogance!)

As philosopher Friedrich Nietzsche once said, “In all institutions from which the cold wind of open criticism is excluded, an innocent corruption begins to grow like a mushroom – for example, in senates and learned societies.”

Up Next: Why We Sleep