The Bridge Over the Pond 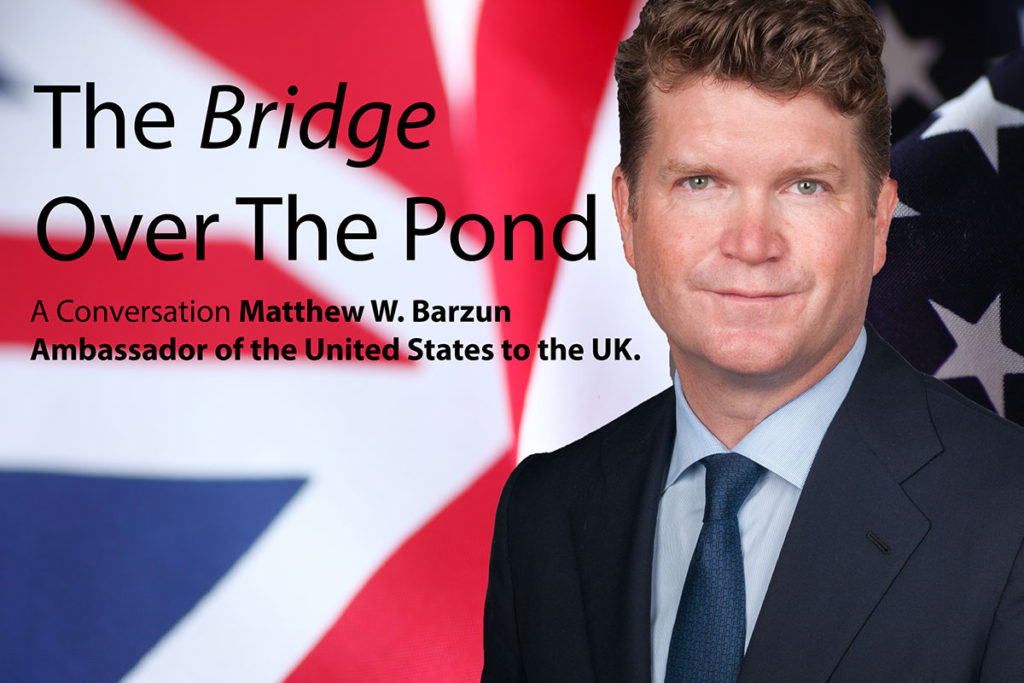 A Conversation Matthew W. Barzun
Ambassador of the United States of America to the United Kingdom of Great Britain and Northern Ireland

We often hear policy-makers talk of the ‘special-relationship’ between the United States of America and the United Kingdom, and often dismiss this as politician-speak yet the truth is the USA and UK have a deep, complex and successful partnership which has benefitted both sides economically, socially and culturally for many years.

To learn more about this link across the Atlantic, I spoke to Matthew W. Barzun, who is the Ambassador of the United States of America to the United Kingdom and Northern Ireland.  He is an experienced international diplomat, and also and accomplished entrepreneur.  Ambassador Barzun was a pioneer in the early days of the internet, becoming the fourth employee of CNET Networks in 1993 and working there until 2004 in a variety of roles including Chief Strategy Officer and Executive Vice President.

Q: How do businesses in the US perceive the UK and vice-versa?

[Ambassador Matthew W. Barzun] Well, do you remember those Venn Diagrams from school? Those overlapping circles to represent what two things do and don’t have in common? Imagine executives from a major company in a conference room drawing one of those with two circles that partially overlap. One circle represents the countries where they believe they need to do business and the other represents where they want to do business. On the need side are places where the markets are so large and full of opportunity that they can’t let a competitor get an advantage there, even if they pose other business climate risks. On the want side are countries with shared business and commercial practices, advanced infrastructure, innovation and creativity, rule of law, anti-corruption measures, intellectual property protection, and contracts that are rigorously enforced. The overlap of these two is incredibly fertile territory and this is exactly where businesses in the U.S. and UK see each other – places where they both need to do business and want to do business.

Q: Why have the UK & USA had such long-standing and close relations as business allies?

[Ambassador Matthew W. Barzun]  If you go way back, the start of the relationship between the USA and UK was not overly friendly, shall we say? Yet even in those early days after independence, a back-and-forth of goods, ideas and investment continued. That pattern grew quickly, even through other challenging times, and continues to this day.

The extent of its growth really struck me when I was traveling recently to Hull. I was sitting on a train—the British invention that transformed trade and travel, and was embraced very early in the United States. In my hand was an iPhone – another revolutionary advance, this time created by Americans with its iconic appearance designed by an Englishman. I used the Internet – the 20th century equivalent of the train, this time founded by an American and adopted early in the UK – and went on to the World Wide Web (we often forget the two are separate inventions), which was developed by a Briton and commercialised by an American. And I did some speech prep using Wikipedia—a site developed by an American who now lives in London. There are countless examples like these.

Q: What are the similarities and differences you have seen in entrepreneurial culture between the UK and USA?

[Ambassador Matthew W. Barzun] I have had the great pleasure of seeing some extraordinary work done by start-ups and entrepreneurs on both sides of the Atlantic, whether it is Silicon Valley, Silicon roundabout or elsewhere.  One of the ideas you hear often is that in America there is a culture where not only is it ok to fail, but it’s almost expected – like a badge of honor. This is true to a point but that implies a cut-throat culture that is more legend than reality and is actually bad for innovation. It is important to remember the human element in attempting to get a business off the ground- both in the UK and in the US. Whatever the culture, people struggle and work hard and need all the support they can get whether that be from family and friends, mentors, other businesses, government resources, etc.

Too often I feel there is also a search for ‘the next’ Steve Jobs or Joanna Shields. These are extraordinary people and yet I believe we should not treat entrepreneurialism as requiring a narrow checklist of certain characteristics. The key both in the US and the UK is to have hand-raisers – people who want to take a chance, and get involved. That is a spirit that you see both in the UK and in America.  And that is what we should be encouraging.

Q: How are governments working to make it easier for businesses to travel and trade?

[Ambassador Matthew W. Barzun] I have great news for every UK citizen reading this interview.  We understand how important it is to make travel to the United States easier and friendlier, especially for UK citizens, more of whom visited the U.S. than ever before in 2015. U.S. Customs and Border Protection (CBP) has made great strides in recent years to provide a best-in-class international arrivals experience

Last November, CBP announced the expansion of Global Entry to UK citizens. Global Entry is a Trusted Traveller Program that allows for expedited clearance of pre-approved travellers. That means if you’re a member of Global Entry you skip passport and customs booths on your way into the U.S. Instead, you use an easy kiosk available at more than 45 airports in the United States and, in less than one minute on average, you’re in.

CBP will be standing up an enrollment centre in the U.S. Embassy in London beginning in late September to make it even easier for UK citizens to complete their enrollment in the program. For the non-frequent traveller, CBP expanded the use of Automated Passport Control kiosks to include Visa Waiver Program travellers. APC kiosks streamline the entry process for visitors and have reduced wait times at airports around the country.

Q: What are the key opportunities in two-way trade between the UK & USA?

[Ambassador Matthew W. Barzun] The sky is the limit when it comes to shared opportunities. Certainly a key one is the maturing of the digital economy. Advances in smarter AI, robotics, the IOT, autonomous vehicles, 3-D printing, nano- and bio-technology, materials science, quantum computing and financial technologies are creating new opportunities. And there will be increasing importance for companies to do business in environments and markets with transparent intellectual property protection, and predictable rule of law.  As strong trading partners with shared and enduring values for attracting and supporting companies from each other’s jurisdiction, the UK and U.S. are well-positioned to be mutual winners in this new digital age opportunities.

Q: What has been your biggest learning in entrepreneurship?

[Ambassador Matthew W. Barzun] One of the defining experiences I had with CNET, a digital media company where I was the fourth employee back in the dawn of the internet, was recognizing the power of asking for help. We were essentially a digital product review magazine at the time, but without any of the resources available to the big, more established publishers. The way we made it work was asking our users to say what they really felt about the tech they had bought. It is pretty ubiquitous now and lots of other companies have taken the idea further and in different directions, but at the time it was pretty revolutionary- and it transformed the way we did things. We asked people – who were really passionate and knowledgeable about the kit they were using – to share their experiences. We had intended to build a media network but what we were really building was a people network. The same idea of reaching out, opening up and asking for help has been invaluable to me since- especially in the world of diplomacy

Up Next: Being Authentic Entrepreneurs