The Dangers of Economic Inequality 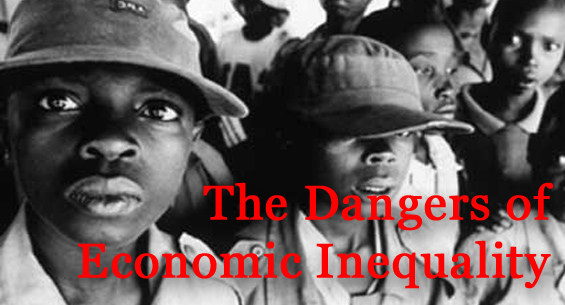 The Guardian, along with many major news agencies around the world have been reporting the tragic story of how, “South African police chiefs have called for residents of a township near Cape Town to help track down the “useless scoundrels” who on Saturday killed a bride on honeymoon with her British husband. Anni Dewani, 28, a Swedish-born engineer, who had been married for less than two weeks to 31-year-old Shrien Dewani from Westbury-on-Trym, Bristol, was found murdered in Cape Town’s Khayelitsha township.”

This is a horrific story, but one which is becoming increasingly common to see in global newswires.

Research by the Geneva Declaration Secretariat shows that, “…More than 740,000 men, women, and children die each year as a result of armed violence.  By far the largest aspect of the global burden of armed violence is the deaths and injuries that occur in non-conflict or non-war settings. Countries such as South Africa, Jamaica, and El Salvador suffer from extremely high recorded levels of homicide, with more

deaths each year than in many contemporary wars.  Approximately 490,000 deaths from homicide are estimated to have occurred in 2004.” To put that in context, more people than the entire population of the City of Manchester are conservatively estimated to have been killed, every year, in non-conflict armed violence (which refers to the intentional killing of one person, by another, outside the world of law enforcement, war, and other conflict situations).

On the assumption (which I hope the reader holds as dear as I) that the (preventable)  loss of even one human life is unacceptable; here, we have a situation where many hundreds of thousands of individuals die, needlessly, every year- for reasons which are wholly preventable.

In 2004, the World Health Organisation published a report into, “The economic dimensions of interpersonal violence”.  Looking specifically at the economic factors contributing to violent acts, the writers analysed a number of key studies citing:

Drawing paradigm from the world of terrorism- many of the world’s leading thinkers agree that extremism usually emerges in situations where the population have no economic alternative.  In this case, we see a similar picture- it is not simply the fact that a populous is in poverty which acts the precursor to violence- but more so the inequality which occurs.  In Afghanistan, for example, there were clear cases of insurgency increasing as the population became aggravated of the [alleged] wealth being accumulated by the Karzai family while the majority of the population was left starving.

Economic development is one of the major tools we have to improve global security.  This development takes many forms, from the provision of healthcare and education, to the development of industry, infrastructure and agriculture; along with the skills of peace-builders and NGO’s in beginning the process of building bridges in communities, where otherwise there were walls.  These may sound like huge goals, but they are achievable.  Hunger, for example, acts (understandably) as one of the strongest psychological factors in one’s own sense of poverty.  Can hunger be eliminated, “The United Nations estimates that it would take at least $30 billion per year to solve the food crisis, mainly by boosting agricultural productivity in the developing world. Over the decade that it would take to make sustainable improvements in the lives of the 862 million undernourished people, that amounts to $300 billion“.  To put that in context, it would cost over ten years, to eliminate hunger, roughly 30% of what the UK government spent in one year to prop-up our banking system.  The net effect of the latter being a recession with healthy banks, the net effect of the former being two billion people in the world who don’t have to worry about feeding themselves or their families.  It doesn’t take too much academic examination to understand which would benefit society more?  Even if we look at the root causes of non-conflict armed violence; international drugs trade, criminal gangs, ethno-religious conflict, and more- in all these cases, there are hundreds of studies by the brightest minds in the world showing that by addressing the root economic causes of these situations (alongside improvements in law-enforcement, and so forth)- they can be resolved.

For Anni Dewani, though, the economic rhetoric I have espoused here comes too late.  No amount of discussion will bring her back to her husband or family; and as the guardian reports, “More than 600 people, many of them friends and family, have left tributes to Anni Dewani on the Facebook site.”

As someone who has, in their lifetime, been affected by violent crime (albeit not with the resulting loss of life of someone close to me)- I can wholeheartedly empathise with the sentiments of the Dewani family who will, with complete justification, feel intense anger towards the individuals who have taken the life of a family member.

The problem occurs though, when anger turns to hate, and is used to build more walls; and that transition does not take much to occur.

In Manchester, I work closely with a number of charities- one of them being “Mothers Against Violence.” Many of their members, are families who have had loved ones taken away in preventable incidents (in the main, involving firearms).  The members of this charity have channelled the anger and loss they felt into a positive form; they work not only with the families who have been affected by violence, but with the individuals who have perpetrated the crimes, and the wider community- the aim being to provide opportunities for younger people within communities to ensure they do not fall into the same habits- and to ensure the community has an open dialogue to build ties, and not walls.  In many of these cases, their anecdotal evidence also supports that most of these crimes occur in communities where severe inequality and lack of economic opportunity exists.

At a local community level, organisations such as MAV (above) do great work to try and build communities and resolve these problems, but at a global level this comes down to us, as voters and participants in our ‘advanced democracies’ to rally our leaders in business and politics to act on inequality- rather than spending trillions of dollars on wars- providing equal opportunity is the best way we have of building a safer and more secure future for the generations following us, to ensure they do not have to endure the fear, pain and loss we have.

And that, I would argue, is the best tribute of all.

Up Next: The Moral Hazard of Asymmetric Information