Close Search ×
Order the Book Subscribe Free
The LIBOR Scandal – What Next?

The LIBOR Scandal – What Next? 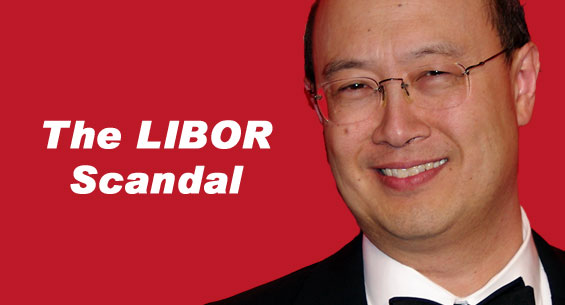 Finance is a world where your input, output, and value-add are the same, money… and after a while in the  markets, everything becomes just-a-number.   Traders may start their careers excited at the prospect of handling millions, but soon- even billions become just a number, a number that you play with to meet your own- or your firm’s- objectives, and a number which- once the trade is done- is forgotten.

One of these such numbers, is LIBOR.  A global benchmark rate for short-term interest rates, first used in 1986 and which now, “…determines the prices that people and corporations around the world pay for loans or receive for their savings..” and which is “….used as a benchmark to set payments on about $800 trillion-worth of financial instruments, ranging from complex interest-rate derivatives to simple mortgages …and the global flow of billions of dollars each year.” (Economist, 2012).  The manipulation of LIBOR could be the “biggest securities fraud in history…” (Economist, 2012)

To learn more about the LIBOR scandal, what it means to risk managers, investors, and what the future holds- we spoke to Prof. Andrew W. Lo (Charles E. and Susan T. Harris Professor at the MIT Sloan School of Management and director of the MIT Laboratory for Financial Engineering).  In 2012, Prof. Lo was ranked by Time Magazine as one of the 100 most influential people in the world.

Prof. Lo is considered to be one of the world’s foremost experts on financial markets and economics. He has published numerous articles in finance and economics journals, and has authored several books including The Econometrics of Financial Markets, A Non-Random Walk Down Wall Street, Hedge Funds: An Analytic Perspective, and The Evolution of Technical Analysis. He is currently co-editor of the Annual Review of Financial Economics and an associate editor of the Financial Analysts Journal, the Journal of Portfolio Management, and the Journal of Computational Finance.  His awards include the Alfred P. Sloan Foundation Fellowship, the Paul A. Samuelson Award, the American Association for Individual Investors Award, the Graham and Dodd Award, the 2001 IAFE-SunGard Financial Engineer of the Year award, a Guggenheim Fellowship, the CFA Institute’s James R. Vertin Award, the 2010 Harry M. Markowitz Award, and awards for teaching excellence from both Wharton and MIT.

Q: What was the rationale behind the creation of LIBOR, and how was it intended to work?

[Prof. Andrew Lo] The original motivation was to develop a sense of what lending rates were among the large money-centre banks.   It was really meant as a reference rate of where supply and demand of funds sat at a given point in time.

The idea was that these rates would be attained by polling a number of banks.  To make sure you got a reasonably representative rate, you would remove the outliers- the highest and lowest.  This symmetric trimming of quotes would provide an indication of where rates were.  You would then take the median of whatever was left.

It was meant to be a fairly robust measure of borrowing and lending activity.

Q: Was LIBOR designed to impact the valuation of such a wide range of instruments?

Q: How and why was LIBOR manipulated?

[Prof. Andrew Lo] Obviously these matters are still under investigation, but what we have to go on are the charges levelled by the CFTC complaint.  It looks like, in the case of Barclays, the manipulation was really to influence the LIBOR rate in favour of the proprietary positions of the bank’s various portfolios.  Because these reference rates are used to set prices of other instruments… if you have a large enough portfolio of fixed-income instruments, it would be to your advantage to be able to move LIBOR- even by 1 or 2 basis points, in one direction or the other.

The manipulation was not easy.  There was a fairly elaborate process by which LIBOR was computed.  You have all the different quotes from various banks- around 16 of them.  You drop the lowest and highest, and compute the median.  In order for you to influence the rate, you can bid high or low- but if you ended up quoting a figure too high- for example- your bid would be eliminated and you would have no impact.  The question remains to be investigated is whether any of the banks were colluding with each other.  It would obviously be easier to move the rate if you were able to collude with other banks and submit false-quotes.  If you’re acting alone, it’s not that easy to move rates by more than a basis point or two.

There’s also a separate matter of whether banks, during the financial crisis, were under undue pressure by regulators to submit quotes that were more optimistic than reality would warrant.  We don’t know the answer to that yet.

Q: What is the scale of the LIBOR scandal?

[Prof. Andrew Lo] I think the scale is potentially huge.  Frankly, this is one of the reason why investigation is so important.  You and I can sit around and try to speculate about the scale of this issue, but in the end- the best approach is to keep an open mind and let the investigation go where it may.  Hopefully the various parties involved will not interfere with this investigation, and let us get to the bottom of this mess.

Q: Has the LIBOR scandal affected the psychology of the market?

[Prof. Andrew Lo] It’s definitely affected the psychology of the marketplace.  We have a number of lawsuits, currently in progress, against various counterparties in this LIBOR scandal.  It’s definitely had a chilling effect on fixed-income markets- which are, of course, amongst the largest markets in the world.  It could not have come at a worse time.  We have to deal with this expeditiously and make the system more robust to these kind of issues.

It has certainly affected the appetite to investors to engage in LIBOR denominated contracts.  Financial markets depend on trust, and we had precious little trust as it was.  The LIBOR scandal has done nothing to restore that trust.  We have to do a lot more work on our regulations, procedures and regulators to re-establish that level of trust.

Q: Is there a better way to compute a benchmark rate?

[Prof. Andrew Lo] Firstly it’s important to recognise that not all financial contracts are created equal.  We should not assume that there is one single benchmark for all types of financial transactions.  There are certain transactions that should be based on market rates, and others which call for the kind of benchmark that LIBOR provides.  LIBOR-type rates do play an important role in certain cases, but we must put on tighter restrictions to ensure that manipulations are less likely to occur.  There has to be transparency and arms-length rate setting.  This happens all the time in other parts of the financial system, it can be done- we just have to have the will to make it so.

Regulators should play a more productive role- not necessarily a greater role.  They could use technology to make rates less likely to be manipulated.  There are a number of mechanisms by which you can protect the confidentiality and reliability of various kinds of rates.  These technologies have been applied with employment numbers, crop reports and other kinds of sensitive information.

Once you’re able to reduce the human element, and automate the reporting of these statistics- you will be greatly reducing the potential for misbehaviour.  This is where regulators can leverage technology, reduce their burden, and create a much more reliable system for all.

For more than a quarter of a century, LIBOR has remained a convenient (albeit deeply flawed and outdated) tool for rate-setting.  In hindsight, it seems almost ludicrous to think that hundreds of trillions of dollars of financial instruments are set (largely) by guesswork and trust.  In many other theatres, where the impact(s) of manipulation would be far less existential, rate-setting and price-discovery are considerably more sophisticated.

Market participants are the supply and demand dynamics of the economy.  There are few (if any) who have been left unaffected by this scandal, and alongside the important process of investigation, and the application of justice- it is essential that everyone in the market agrees that convenience cannot exist at such a tremendous cost.

Investors and risk-managers must now be open minded to the ideas and technologies which will shape the future of rate-setting and price-discovery, creating a more transparent and trustworthy market for everyone.

A Conversation with Harvard Professor, Ranjay Gulati, on Deep Purpose: The Heart and Soul of High-Performance Companies.

A Conversation with Renzo Rosso, Founder & Chairman of OTB Group, Founder of Diesel and Philanthropist.

A Conversation with Tim Leberecht on Making Business Beautiful.