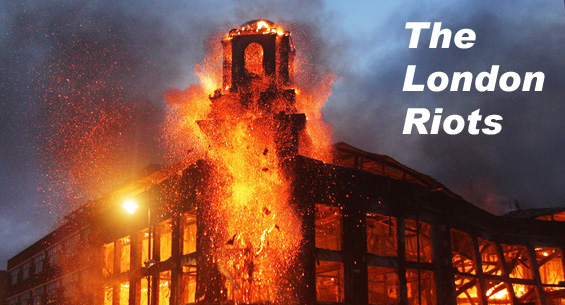 As we sit here today, London remains in the grip of escalating riots, violence and disruption as young people have taken to the streets across the city looting stores, torching vehicles, engaging in arson and more.  As the Guardian newspaper reported, “London’s emergency services were on full-scale alert on Monday night as rioting, fires and pitched battles with police erupted around the city from late afternoon.”

The UK’s “Elephant in the Room”

While most media-outlets ostensibly claim the riots were a reaction to the shooting of a man in Tottenham, a report in the Telegraph newspaper contained a telling paragraph citing, “…some say the police “had it coming”; others that the violence was only to be expected given the unemployment and poverty in the area… Some local people told journalists of their resentment towards the police. One student said: ‘The police never talk to us, they ignore us, they don’t think we’re human in this area.’ A youth worker claimed: ‘The way the police treat black people is like we’re nothing.’ And a retired accountant who has lived locally for 30 years reported that some of the police ‘behave in an arrogant manner that puts people’s backs up’.”

Before I continue, let me state that there is clearly no justification for the malicious and abhorrent acts of criminal behaviour which are taking place on the streets of London.  That said, these riots have revealed the UK’s ‘Elephant in the Room’.  For all our nations rhetoric about being an economic powerhouse, and the hub of global capital- the fact remains that for an astonishingly large amount of young people they are finding two key factors preventing them from participating in society in a dignified manner.

Firstly a lack of economic opportunity as a result of misguided education policies and even more misguided economic policies creating individuals ill-equipped to join an economy which requires a relatively high base-level of qualification to get even a low-paid job.  The simple fact remains that any group of individuals who feel suitably aggrieved and excluded from their economy will easily be radicalised or provoked into action- whether this be in the form of protests, riots or even terrorism (see my post on crime and equality)

Secondly an environment which has turned ‘race’ into such taboos, that you end up with unintended marginalisation as individuals from ethnic communities who genuinely need help are often left by the wayside as policy-makers and law-enforcers skirt around issues without confronting them.

Thirdly we have a country which has been in the grips of an economic downturn for a lot longer than any policy maker would like to admit- meaning that jobs which could and should have been created in the economy were not.

This is not new thinking, or controversial thinking.

Kristiina Rintakoski, Executive Director of the Crisis Management Initiative (launched by Nobel Prize winner President Martti Ahtisaari) said (in my 2009 interview with her), “…All conflicts are different with their particular history and reasons. I think that inequality within societies and between regions has become a key cause for conflict, exacerbated by rapid information dissemination, as people are (now) more aware of inequalities...”

Similarly, Celso Amorim (Foreign Minister of Brazil 2003-2011) when talking to me about Brazil’s own growth story, stated (on the key factors contributing to Brazil’s economic growth), “….probably most importantly- was the ability of Brazil to deal with a problem we inherited from colonial times- inequality.”

Outside the comfortable bubble of professional services and established entrepreneurs, the UK is not a nation in great health.  We are a country which has serious systemic problems and spectres ranging from racism and discrimination through to gang-culture, severe inequality, poverty and more.   We are a country with the potential to be astonishing- but one where political culture has become laden with buzz-words, rhetoric and (most dangerously of all) severe short-termism.  this is NOT the way to run a country.

It is difficult now for leaders to assert moral authority over areas of the population who have largely lost their trust.  This trust, however, can be earned back- and must be…. for if our government wishes to act like they believe in a big-society, and an inclusive one… they need to help us create it.

Up Next: An Interview with Larry Hatheway, UBS Chief Economist