The Moral Hazard of Asymmetric Information 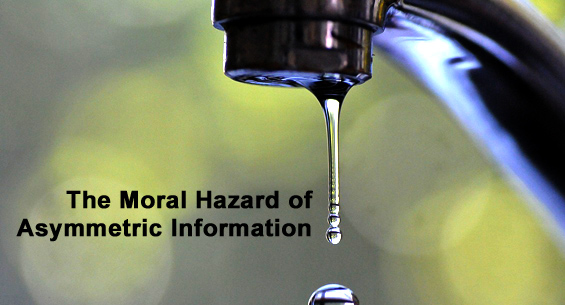 Regardless of whether one agrees with the rationale behind Wikileaks‘ release of thousands of diplomatic cables, one certainty is that their appearance has opened a necessary debate on moral hazard’s in our own democracy.

Information Asymmetry is an important concept, usually noted in transactional situations, where one party has more (or better) information than another- creating an imbalance of power (or influence) in a transaction- affecting the outcome.  “Moral Hazard” is a particular type of information asymmetry which deals (predominantly) with risk.  A Moral Hazard occurs “…if a party that is insulated from risk has more information about its actions and intentions than the party paying for the negative consequences of the risk“.  We first explored this looking at “The Moral Hazard of Short Term Attitudes” in financial markets, but in day-to-day life you could draw paradigm from an individual who takes less care over a hire-car because any negative consequences of a crash are the responsibility of the hire company (and its insurers).

In a political context, Moral Hazard is put in context of the principal-agent dilemma where in this case the principal (voting population) nominates an agent (the government) to act on their behalf.  The agent (a politician, or the government) has more information on its intentions and actions than the principal (voting population) and because of the inability of the principal to effectively monitor and evaluate the agent (due to secrecy, national security concerns, and opacity) the agent is incentivised to act in a way which is inappropriate (for example, politicians claiming illegitimate expenses assuming voters will never find out).

A decision, fundamentally, is an act based on what we know; and for us to make effective decisions we must have (as much as is practical) a clear and accurate picture of the information available relevant to that decision.   In a democratic system, there is an assumption that the political-agents will ensure to represent a true and accurate picture of the geopolitical arena to their principals (the voters) so they may make voting decisions appropriately.  In recent history, we have seen many occasions where this has not been the case.  For example, would voters have supported a war in Iraq knowing there were no weapons of mass-destruction there? (when at the time, they were told there were such weapons to justify a war).

Guardian, December 1st 2010: “The head of the Bank of England, Mervyn King, privately criticised David Cameron and George Osborne (now the prime minister and chancellor) before the election for their lack of experience, the lack of depth in their inner circle and their tendency to think about issues only in terms of their electoral impact. Osborne lacked gravitas and was seen as a political lightweight because of his “high-pitched vocal delivery” according to private Conservative polling before the election.”

Guardian, December 1st 2010:  “The US ambassador to Pakistan said the Pakistani army is covertly sponsoring four major militant groups, including the Afghan Taliban and the Mumbai attackers, Laskar-e-Taiba (LeT), and “no amount of money” will change the policy. Also, US diplomats discovered hundreds of millions of dollars in aid to Pakistan earmarked for fighting Islamist militants was not used for that purpose.”

Guardian, December 4th 2010: ” A potential “environmental disaster” was kept secret by the US last year when a large consignment of highly enriched uranium in Libya came close to cracking open and leaking radioactive material into the atmosphere.”

The debate: Would this incident have changed voters perceptions towards nuclear energy?

Even corporations were not left unscathed with revelations showing oil company Shell’s huge grip on the Nigerian state and a report into drug company Pfizer’s actions to avoid payouts during a huge malaria epidemic in Africa.  In both of these cases, had this information been available- would it have affected shareholder views of the companies (and hence the price of shares)? Would consumers have engaged differently with these organisations? (in the same way that they would, for example, boycott a company that is found to be using child labour)

For politicians themselves, issues of asymmetric or incomplete information have become “part of the course“.  As the Foreign Policy journal reported in October 2010, “For decades, Israel has maintained an “opaque” nuclear posture — neither confirming nor denying that it possesses nuclear weapons.”  This posture is significant- Israel’s neighbours and allies in the international community would certainly adopt different policies towards it based on confirmed existence (or non-existence) of nuclear weapons.

It goes without saying that national (and global) security require a degree of information opacity- but politicians must now realise that the diffusion of communications power means that we (as principals) now have more effective means of monitoring and evaluating them.  Whether we consider the release of these cables by Wikileaks, or the outing of human rights abuses via twitter, youtube and other platforms- the walls controlling information flow (as required to maintain authoritarian rule) are being broken- and as fast as regimes (democratic or otherwise) can innovate policies and technologies to communicate covertly, the public will invariably create innovate ways to monitor them.

For a political regime, therefore, there are two ways to respond to this reverse-Orwellian phenomenon.

1. Politicians can continue to attack, reprimand and incarcerate those individuals who are releasing and uncovering this information.

2. Politicians can begin to realise that we are the principals in this (allegedly) democratic transaction, and until such time as they begin to behave with candour and transparency about issues which are relevant to us (such as national security, war and  economics)  they will simply continue to face battles from the likes of Julian Assange who see themselves as freedom fighters on the public’s behalf.

Underlying all of this is leadership trust.  Whether we consider a family, a commercial organisation, or a country- unless the citizens trust their leaders- the population unit will simply not have the traction to hold together.  It takes only an elementary look at international relations case studies to see how many of the world’s most serious civil unrest comes from societies who have no faith in their leaders.  The engineered complacency of western society teaches us that such unrest is a phenomenon for the developing world, but let us not forget that just over sixty years ago (well within one lifetime)  the state-sanctioned genocide occurred of over six million European Jews during World War II.

I therefore take this opportunity to dedicate this post as an open letter to our leaders to rally them to regain our trust with transparency and candour as, without any doubt, when you have a population who believe in nothing, the danger exists that people can come along who can make them believe in anything.

Up Next: How Technology and Innovation Drive Global Development