The Need to Call it Business 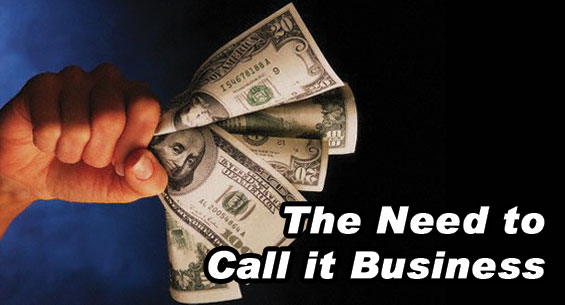 In 2010, The Economist reported the story of Narsama Anthaiah who’s “…sobbing can be heard throughout her village, Nagaram, in the Indian state of Andhra Pradesh (AP).” They continue to explain, “When visitors from Hyderabad, the state capital, some 80km (50 miles) away, cross the threshold of her bare little house, Narsama Anthaiah flings herself prostrate and wailing onto the dirt floor to touch their feet. Her theatrical grief is heartfelt. Two months ago her husband, aged 40, drowned himself. The AP government blames unlikely villains: microfinance institutions (MFIs), which have been expanding fast in the state. Microcredit—small loans to the poor, ideally to start a tiny business—has until recently been seen as one of best hopes for the three-quarters of Indians who still live on less than $2 a day. But the political fallout from such deaths has put paid, at least for now, to the industry’s expansion. It could even destroy it altogether in AP, and conceivably beyond. The blame the MFIs shoulder is unfair. Farmer suicides are lamentably common in India. Anthaiah took his own life as a payment loomed on a 15,000 rupee ($333) MFI loan. Heavy rain had waterlogged his cotton crop and left the family struggling to pay the interest rate of 36% a year. But the couple, who had borrowed to build this house, also owed 34,000 rupees to a local moneylender, who charged over 50%.”

Microfinance is certainly an expanding market. According to MiX Market’s figures- the 1934 Micro Finance Institutes (MFI’s) reporting data in 2009 showed a gross loan portfolio of USD 64.8 billion, spread across 91.0million borrowers who, on average, borrowed around USD 534.00. To put this in context against ‘conventional’ lending, US consumers (c.307m) have collectively borrowed USD 2,425 billion through around 8,000 financial institutions.

Looking at the market size (billions of customers) and the attractive rates of return, Microfinance should be the larger market. Investors should be attracted the (structural, geographic and rationale) diversity of the borrowers, the low default rates (reports show default rates of around 10% on microfinance, with most consumer finance institutions in the USA being way above this), government support and incentives and, indeed, business models which are considerably more streamlined than ‘conventional’ banking- with best practice use of technology.

Company A: “Our goal is to be the best financial services provider in the UK. We believe this means we must build a leadership position not on the basis of scale but on the foundations of reputation and recommendation.”

Company B: “…a cost effective weapon to fight poverty and it serves as a catalyst in the overall development of socio-economic conditions of the poor who have been kept outside the banking orbit on the ground that they are poor and hence not bankable”

Company A is one of the leading consumer and commercial banks in the UK (Lloyds), and Company B is Grameen Bank- one of the world’s largest micro-lenders. Reading the mission-statements, however- you would not be marked down for thinking Company A was a commercial enterprise and Company B was a charity or (at best) a social-enterprise.

While a few select funds and NGO’s have made plays into micro-credit as an investment- the overwhelming majority of funders in the theatre are there because of the social-impact and social-enterprise value of micro-lending rather than the commercial proposition. Not only does this reduce the total amount of capital available to MF institutions to lend from (meaning that loan-sharks and other sources fill the balance) but also introduces bias into the regulatory framework of these institutions- measuring social impact more than applying rigorous (and necessary) regulation and support to protect all sides.

Narsama’s case (above) is testament to this problem. India’s ‘un-bankable’ millions are not only better re-payers than their ‘banked’ counterparts in the west, but their demand for credit (primarily for modest dwellings, micro-businesses, and education) is outstripping supply by a great degree. Had her and her husband’s MFI had access to more capital, and had the regulatory framework been more robust- not only could the interest rate have been more manageable (with more capital chasing the loan demand curve) but the lender would have had processes in-place (similar to the departments in UK banks that deal with loan-restructuring and delinquency) to help the borrower meet their payments and (perhaps equally critical) to educate them on borrowing money. In her case however, joining an increasingly shocking number of similar incidents… her husband could see no way out of the situation apart from taking his own life.

While many argue that eliminating the pseudo-philanthropic element to the microfinance industry would eliminate it’s very benefit- you can see even in the UK and USA that regulated and structured consumer lending does, in most cases, give the consumer a fairer deal (such as real-estate mortgage rates of c.5.75%) versus their unregulated counterparts (such as payday lenders who can show EAR’s of over 3,000%) Of course, even with its downfalls like many other loans can also have, there can be advantages of payday loans online when done correctly.

Conventional lenders help their customers buy homes, finance education, start businesses and pay for life’s necessities. Those who are looking to begin their business often wonder can online payday loans in canada help your business and it doesn’t take them long to realize that it is possible depending on your lender. Microfinance institutions perform largely the same roles, albeit economic classifications mean their borrowers (or depositors) are seen as beneficiaries rather than customers. This classification has emerged understandably through the origins of microfinance, and it’s relationship to development and poverty elimination- but the time has certainly come to realise that these institutions walk, talk and act like commercial-organisations and must be treated as such.

From another perspective, we see that the ‘beneficiaries’ of these loans are just like us- consumers who need to borrow money to create economic opportunity for themselves, their families and their children- they (like us) would not wish to be treated as a charity in this regard, and we owe them the dignity of therefore doing business with them in a professional manner.

Up Next: Money Under the Corporate Mattress