The Role of SME’s in the UK Economy 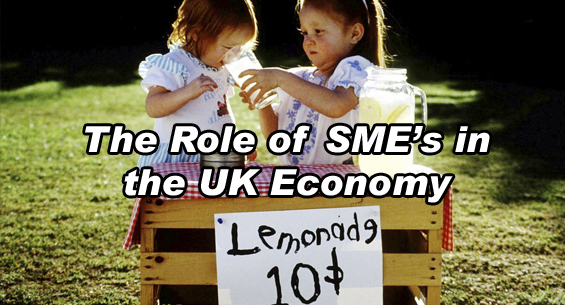 In 1919, a man started a small business selling surplus groceries from a market stall in East London.  His first day’s sales were £4, giving a profit of £1 (around £178.00 in sales and £44.00 profit in today’s money).  Fast-forward around 90 years and this business now generates over £50 billion in annual revenue, employs around 472,000 people worldwide and generates £6,000 in profit every single minute of every single day.  This business is TESCO Plc.

With very few exceptions all of the largest companies in the world started life as small businesses which, through a supportive economy, access to the right people and- of course- capital, turned into giants.  In practice it’s a very small percentage of small firms who experience this kind of growth but the fact remains that small businesses (as a group) remain critical to the UK economy, providing over 67% of the UK’s private-sector jobs and contributing over 50% of UK GDP.

To learn more about the importance of SME’s in the UK economy, I spoke to Professor Mark Hart of the Economics and Strategy group at Aston Business School.  He jointly manages the Global Entrepreneurship Monitor (GEM) project in the UK and advises a number of Government Departments on SME matters including BIS, UKTI, HMT and HMRC.

Q: What is the role of SME’s within the UK economy?

It’s clear to me that small businesses, particularly micro-enterprises, have been responsible for the majority of the gross job creation in the last five years… particularly through the recession.

I’ve also done some research on mid-sized businesses (or mid-caps as they are increasingly known). These are typically businesses with £25-500 million in turnover and they are shedding jobs!  Whilst there is a lot of policy interest from the CBI about these (larger) mid-sized companies, I prefer to look at the small business sector as an engine for jobs growth.

There is a question over the extent to which they [Small Businesses] are driving wealth creation and productivity in the economy, but in terms of jobs at the moment- it’s clear that these business are vital.

In terms of productivity drivers, there is a large contribution to be made by small businesses, specifically those who are involved in sales to international markets.  We also know from research that high-growth firms, many of which are small businesses, are crucial in terms of driving innovation – although there is a complex two-way relationship between growth and innovation.

Q: What are your views on confidence within the SME market?

[Prof. Mark Hart] Through the recession, in my work with the Global Entrepreneurship Monitor, we asked businesses owners the question, “do you think there are good opportunities for doing business?”

We asked that of new and established entrepreneurs and found a consistent profile whereby 1 in 10 business owners felt that there were opportunities in the midst of recession!  That’s a significant number, albeit not a majority.

There is however, a lot of concern in the sector that not enough is being done to support them, which has knocked business confidence.  If you’re selling in the UK marketplace to businesses and consumers, you are faced with an economy that is flat lining, which is also making things difficult.

Q: Are there any key challenges facing SME’s?

I think the challenges are about getting the right people in business, and… of course… finance.   It’s important to note that in the main, established businesses that are on top of their finances, who are clearly able to articulate their needs, and can demonstrate that they are commercially viable… will get the finance they need.

Q: What could the UK do to stimulate more SME entrepreneurship?

[Prof. Mark Hart] For me, one of the big gaps is youth entrepreneurship.  There are a high number of young people who want to set-up businesses, but there is a huge gap between their aspirations/intentions and the actual delivery of setting up a business…. More so with the young than any other age group.

That gap is about skills (which are easily gained), confidence and access to finance.  If you’re 18 and you have a business idea and your family doesn’t have a legacy of business ownership behind them it’s more difficult for you to articulate to a bank or lender that you should get the money you need.  Communities have a role to short-circuit that through, for example, loan funds in communities.  Raising capital for those initiatives can however, be very difficult.

There is also an agenda for older age groups.  I am a trustee of PRIME which is the Prince’s Initiative for Mature Enterprise.  We see that levels of entrepreneurship in the 50+ category are lower than other age-groups but there are a lot of people there who want to come forward and set up businesses.  Many have been made redundant, many want to do it as a lifestyle change… and I think support for those people isn’t as developed as it could be.

The issue for me is that whilst we have all these schemes to bring forward start-ups into the marketplace, there’s huge churn.  Yes the micro-enterprise sector creates jobs.  The established micro-enterprise sector creates around a 1.5 million jobs each year, which is a big number.  In terms of start-ups, we were getting around 1 million new jobs created every year (excluding self-employed people).  That’s fallen to around 600,000 in the recession.  We have to control this churn, and make sure that the most competitive businesses survive.  It’s a bit of a lottery in many ways.

Q: Are there any sectors of entrepreneurship in which you think the UK is particularly competitive?

[Prof. Mark Hart] Believe it or not, we do have a very strong engineering base.  In the West-Midlands where I am based, I am astonished by the level of strong engineering skills in manufacturing companies and in their supply chains.  We really have to build on that.  People talk about the green and low-carbon economy.  These are perhaps fanciful terms, but underneath that, there are solid engineering and manufacturing companies.

I’m very old-fashioned in the sense that I still feel you need a strong manufacturing sector in your economy.  I was saying that in the late 1970’s and early 80’s and people just laughed at me.  I think my day is about to turn.  In the Midlands alone we have over 1000 small manufacturing companies being set up every year.  A lot of them are micro-businesses in a whole range of manufacturing sector.  That tells me that there are skills out there that allow people to set-up businesses, quite easily, that turn over £300-400,000.  The major problem for them is finding skilled labour to bring into their businesses.

Enterprise exists at the very heart of every economy and the UK is no exception.  Entrepreneurship provides a nation with employment, wealth, innovation and development.  It funds culture and provides a redistribution of money into an economy to help those who need it more.   Astonishingly most of these enterprises are smaller than you may think.  Of the 4.8 million businesses in the UK, 96% employ less than 10 people; 74% of those are ‘size zero’ businesses (i.e. those who have no employees such as sole traders).

Never before has there been a better time to start a business.  The amount of support from government, enterprise and the not-for-profit sector for emerging entrepreneurs is now at the highest level in history.  Our nation depends on these business owners to continue supporting the economy into the future.

As Benjamin Franklin himself said, “…No nation was ever ruined by trade.”

Up Next: A Conversation with the Secretary General of Amnesty International, Kumi Naidoo.