The State of Global Ultra-Wealth 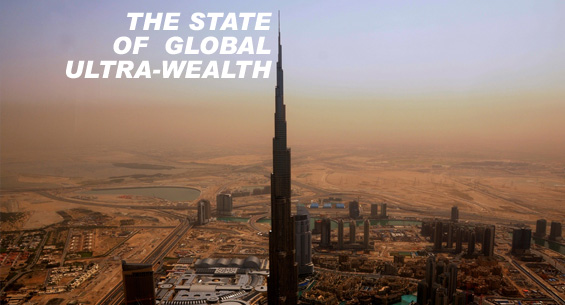 The 2011 World Ultra Wealth Report (published by intelligence provider Wealth-X) describes how, “…the fortunes of the world’s ultra high net worth (UHNW) individuals have surpassed $25 trillion“. This is an astonishing figure, made even more so when contextualised against the value of the entire world’s economic output (GDP) which, in 2010, was ‘just‘ $63 trillion.

This group (defined as those who have a net worth in excess of $30 million) carry tremendous global influence- controlling a significant proportion of the world’s assets, together with a significant proportion of global businesses (just one example of this is WalMart, controlled by the UHNW Walton family, which now employs over 2 million people, about 1% of the entire US labour force). The world UHNW population also carry a profound influence on the wider world (again, just one example of this, is Bill Gates. It is no exaggeration to state that there are millions of people in the world who are alive today, who wouldn’t be had it not been for the support and actions of his foundation).

Q: What are the biggest changes in global wealth over the past decade?

David Friedman: If you look historically at the historical contours of wealth- it’s primarily created through private ownership. That’s always been the case- and I believe it always be. Having said that…. the lines begin to get blurred when you start to look at places like Latin America and Mexico where the state-owned enterprises are dominated by individuals- like a Carlos Slim, for example…. or if you look at state-owned assets being privatised in a place like Russia where former KGB agents are now industrial capitalists.

In the more ‘free’ economies, it tends to be family owned businesses that leverage their capital to create value. I was listening to a fascinating assessment of the railroad industries recently on national public radio. They were talking about how most of the railroad barons didn’t make money on the actual railroads, but on everything around them- they bought the land and so on. The actual railroads went into bankruptcy multiple times. It’s similar to the Levi’s story where it wasn’t the actual gold that made people.. it was Levi’s who sold tents who made as much money (if not more) than those who found gold.

You therefore see these ecosystems and clusters of wealth in the ‘more free’ economies. In the more emerging economies, what emerges are the oligarchies… flash capitalistic systems where you see the leveraging of state owned assets. I don’t see that as having changed over the last decade or even the last century. Those are the sources of wealth! It’s either inherited, created through a private company, or occurs through monetisation of state-owned assets.

Over the last century in the US, with the growth of modern industrialisation… it created the notion that anyone could become a billionaire- that hadn’t happened previously anywhere else in the world.

Q: Moving forward, what are the key trends you see in wealth?

David Friedman: I’m not Thomas Friedman… but we know the world is flat! In my former life, I used to be an economic development strategist- so I used to advise sovereign wealth funds in the Middle East, Latin America and Asia. Everyone wanted to know the same thing… “how can we create silicon valley?” … everyone wanted to generate new growth! The problem is, there are so many different factors that go into creating that ecosystem…. a lot of it also has to be based on a Weber approach to the Protestant work-ethic and the cultural and religious norms that under guard the US system. If you contrast this against China… for example. The Chinese government has realised that to fuel capitalism, an atheistic, communistic, civil-religion will never propel growth. I have a Masters in Philosophical Theology and when I was at Yale Divinity School there were representatives of the communist government there studying the religious roots of the US system. They weren’t doing because they thought it was ‘true’ but because they were astute in knowing that you need this kind-of cultural base. Recently the Chinese government have done a major funding push for Buddhist centres and institutes around the world. They are trying to replace one philosophical narrative with another… They realise that their system, frankly, will not support the growth or creativity to create the new technologies and companies that are necessary. It’s important to note that technology is one of the biggest drivers of GDP growth.

In all the politics that’s going on… everyone says that small business are the driver for growth. The truth is, it’s not just small businesses… it’s NEW businesses. They are the ones that consume the largest number of jobs in an economy and lead to economic growth.

If we look at wealth trends… One of my good friends is the individual who brokered the deal with Coca Cola in North Korea. This is a country which is an unbelievable goldmine of human capital and talent. Even a decade ago, we used to watch films and note this was the greatest untapped labour force in the world. Without the proper cultural world-view and narrative surrounding it, however, it will be challenging to monetise it. The fact that Coca Cola is going in should, though, tell us something!

Q: Will the UHNWI groups of the US and Europe move towards wealth preservation strategies?

David Friedman: I will tell you- broadly- the answer is no.

I’ve worked with many entrepreneurs and billionaires and I see the same trend over and over again. What they want is someone to manage the liquid side of their portfolio, and they want to take a huge chunk out and use it as their risk capital on things they know and can control. The money didn’t just drop-in… it arrived through creation and building! These individuals are always going to be about growth….

Q: Are there any portfolio trends for these individuals and groups?

David Friedman: These individuals are looking for a global liquid multi-asset portfolio that is highly correlated around risk management strategies. They are all looking for risk management as the liquid side of the portfolio is what they want to preserve- they don’t want you taking risk! they’re going to do that.. and they can do it better than you can because they’re now worth hundreds of millions or billions!

They’re always going to look at the financial adviser and say, “you look after what I have, but the rest of this portfolio, I’m going to allocate, and make more money…” or “…I’m going to spread this across multiple companies that have to do with interesting things that I’m passionate about or interested in…” or even philanthropy. Everyone’s talking about venture philanthropy, social entrepreneurship, impact investment and so on…. and you now see questions being raised about whether individuals portfolios are aligned around these interests.

Q: Have global events such as the financial crisis and the Arab spring impacted wealth management strategies?

Let me start with the wealth-management industry. Before 2008, many of the private banks were hand-over-fist getting referrals from clients. They didn’t have to ‘sell’. They had no strategic business development strategy. In many cases they said, “..we don’t have to sell, we just meet with our clients…”

I meet regularly with all the heads of the private banks and now… there is not one firm who isn’t actively having to create strategies on how to build a book of business in the Ultra High Net Worth space. The attitudes of participants in the wealth-management industry towards the UHNWI group have changed significantly.

The big trends have been that financial advisers have told these UHNWI’s that they have to diversify their portfolios. They have been taking that advice to heart and diversified their advisers too! There’s a massive trend of individuals moving from having one primary adviser to having two or three. Another trend echoes the old family office model of the Rockerfeller’s and their counterparts. In the very beginning, these families had substantial wealth so they could go to any private bank they wanted and have an open-architecture model. UHNWI’s are coming to the market now and demanding an open architecture approach that doesn’t- frankly- fit the business models of the different players. The idea is.. for example… “I want to go to J. P. Morgan and get a structured product, then go to Goldman Sachs for something else.. and so on..” that’s what most my entrepreneurial friends think. They want open-architecture. That only makes sense at a certain dollar value. What nobody has really done yet, is bring that ‘Family Office‘ open architecture model down to lower-tier UHNW ($20-60m). In many ways, the private banking industry reflects the battle between firms in IT where you see a battle between open and closed architectures. It’s true that with a closed architecture you can control delivery of service…. but that trust can be eroded quickly – as it was for banks during the mortgage crisis. Everybody is now marketing opening architecture, but the question is… are you really open!

Q: What are your views on capitalism?

David Friedman: My big contention is that we’ve misread Adam Smith. People don’t realise that Adam Smith was a moral philosopher before an economics expert. His first book, before he wrote “The Wealth of Nations” was, “The Theory on Moral Sentiments“. In that book, you find the answer for what the invisible hand really is! He never accelerated the narrative that there should be completely unfettered free markets. He believed markets took place in the context of a moral framework and foundation. This whole de-bunking of capitalism and it’s narrative is- in my opinion- a misunderstanding of Adam Smith and his work.

Knowledge about wealth is critical. UHNWI’s provide investment and liquidity for much of the global economy and understanding- therefore- patterns in the creation, growth, defence and even decline of wealth will give investors a better understanding of ‘where the money is‘ (don’t forget, this is a group who truly understand how to make it!) while giving risk-managers a critical insight into risks within their portfolio (it would be a brave investor who stays in after Buffet has left…).