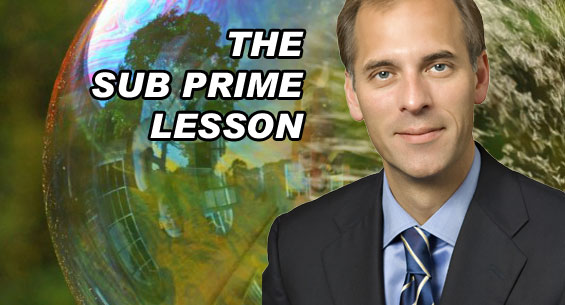 It’s difficult to downplay the severity of the sub-prime mortgage crisis.

Between June 2007 and the end of summer in 2008- American’s lost over a quarter of their net-worth.  Home equity in the USA  dropped (over the period) by over $4 trillion, with retirement, savings and investment assets losing a further $8 trillion.

Financial institutions opened their eyes to the fact that the mortgage backed securities (MBS) they had been packaging (together with the complex instruments built on them) could now result in over $1 trillion being written off their own balance sheets.  Many of the world’s leading financial institutions sought emergency government assistance, while other giants (such as Lehman Brothers) collapsed.

This ‘one-in-a-million-year-event‘ triggered an economic contagion which even today looms in the form of economic crises in Europe, the United States and parts of Asia- crises that have caused governments to inject trillions of dollars into the economy in an attempt to avoid a catastrophic and deep depression.

“…Most fundamentally” says Mark Zandi (Chief Economist of Moody’s Analytics), “….the subprime bubble was created by- a surfeit of global liquidity due to large current account surpluses in China and other emerging economies and easy global monetary policies; a flawed private mortgage securitization process that funnelled the liquidity into poorly underwritten mortgage and other loans; and weak regulatory oversight that failed to catch and rectify the problems in the securitization process…”

The factors Zandi listed above created a gathering storm of  tighter monetary policy and rising mortgage rates that eventually contributed to the inability of housing and other real-estate investors to exit their assets.  The buy-side of the market evaporated, prices began to collapse, defaults arose and the bubble (which had taken over half a century to build) burst.

Unlike many previous crises, this one spread worldwide exceptionally quickly.  “Global investors were awash in cash due to current account surpluses in emerging economies and easy monetary policies….” says Zandi, “…Investors from emerging economies first invested their rapidly rising wealth in risk-free Treasuries, but once they had their fill of Treasuries they looked for higher yield in what they thought was the next safest thing, U.S. residential mortgages. Due to shrinking returns on less risky investments, other global investors began to search for yield by taking more risk investing in more complicated securities and derivatives…”

What does this mean for Investors & Risk Managers?

Bubbles used to have two layers.  At the centre you had real-assets, holding a fair market value and behaving as the market would universally accept.  These were assets such as commodities, cash, equities, real-estate and so forth.  The layer outside this was economic-leverage.  This was money created by leveraging the security of those real-assets and accepting some considered level of risk.   As our global economy advanced, it created a third layer- secondary leverage.  This was new money and debt  created on the back of existing leverage- for example, securitisation of debt and other instruments.  The size of this market was tens of times larger than the size of our global economy- with a notional value in the hundreds of trillions of dollar space.

Investors and risk managers have to change their models.  “They should be stress-testing their balance sheets and portfolios under a range of negative scenarios, and have sufficient capital and liquidity to withstand scenarios that are far out on the tail of the distribution of possible outcomes….” says Zandi. “…The stress tests should account for potential bubbles in global asset markets….”

This is more than just-another-redraft of Basel accords, and means that investors and risk-managers have to be realistic about the likelihood of extreme left-tail events while chasing their right-tail (bubble related) returns.

Mark M. Zandi is chief economist of Moody’s Analytics, where he directs economic research. Moody’s Analytics, a subsidiary of Moody’s Corp., is a leading provider of economic research, data and analytical tools. Dr. Zandi is a cofounder of Economy.com, which Moody’s purchased in 2005. Dr. Zandi frequently testifies before Congress on topics including the economic outlook, the nation’s daunting fiscal challenges, the merits of fiscal stimulus, financial regulatory reform, and foreclosure mitigation. Dr. Zandi is the author of Financial Shock: A 360º Look at the Subprime Mortgage Implosion, and How to Avoid the Next Financial Crisis, described by the New York Times as the “clearest guide” to the financial crisis.

Up Next: The Business of Invention