The Truth About Democracy 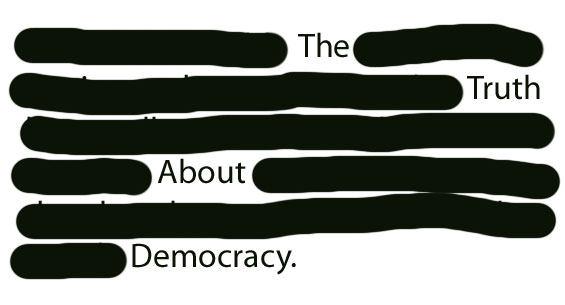 In recent weeks, we have seen uprisings in Tunisia, Egypt, Algeria, Yemen and Jordan where members of the populous have taken to the streets, demonstrating and disrupting a country over issues ranging from food inflation, corruption, freedom of speech, living conditions and basic human and economic rights.  Most notably of these have been the actions in Tunisia and Egypt which, at least academically, have forced some degree of regime change.  For the first time within the Arab world, populations have realised that they can create change by mobilising.

So what’s changed? Why did this not happen sooner? The answer is technology.

In each of these countries, you are dealing with regimes which curtail freedom of speech and communications to a degree which gives them notional control over the population.  The combination of fixed line and mobile internet, together with social media platforms and even SMS has given ‘the general public’ tools by which they can co-ordinate themselves in an organised and massive fashion; and in a way which subverts the typical methods of censorship employed by regimes.  In the Egyptian example, even recreant actions such as  ‘switching off the internet’ didn’t preclude demonstrations from continuing, as firms such as Google provide alternative access platforms for users.

“New media conducive to fostering participation…” says Clay Shirky (Professor of New Media, NYU) “…can indeed increase freedoms… just as the printing press, the postal service, the telegraph and the telephone did before.” He continues by citing Jurgen Habermas, a German philosopher, who argued, “…the printing press helped democratise Europe by providing space for discussion and agreement among politically engaged citizens, often before the state had fully democratised.”

In less public examples, the collective powers of social media have allowed people to renege death-sentences (such as the example of Hossein Derakshan in Iran) and even become aware to subversions in the information the government present to them (such as the differences in the ‘official state’ view of the Tianamen uprisings in China, versus what actually happened- and recent  revelations presented by Wikileaks on a wide-range of issues).

Cynics argue that social-media does nothing but enable populations to demonstrate, and make noise- and while there are many examples such as these, where it has been successful- there are many others which haven’t.

Underlying all these incidents and rhetoric is one fundamental need- that being for a population to have democratic structures to govern themselves (either through political agency, or otherwise).  Social media has provided the population with the tools to examine and respond to their political and social contexts- whether that be through the public exposures of wrongdoing (be it human rights abuses, secrecy, corruption or otherwise)- or through the co-ordinated disruption of a country until change is brought about.   The big question is… what next? The danger- of course- is that by displacing one regime, the population will end up with military rule or (worse) an even more oppressive regime with a heavier iron-fist.  The conflicts in Rwanda and Darfur have taught us, in recent history, that there are leaders for whom the killing of hundreds of thousands of innocent people is not a sufficient taboo such as to be avoided in their pursuit of power.

The missing link is the mechanism of participation.  Technology has now got to the stage where even in the most remote regions- sufficient communications technology exists to allow people to participate in the democracy process, while having transparent access through their government.  India is a case in point of such activities where the government is combating highly public and embarrassing corruption scandals to generate an integrated electronic system to allow everyone from villages to cities to participate in the democratic process.  These mechanisms are helped by freedom of speech, assembly and so forth- but the Jasmine revolution has shown that even in the most oppressive of circumstances, voices can still be heard.  The balance of power within any population usually means that left to their own devices, with the right participation mechanisms, a population will usually perform democratically for the benefit of the whole.  It is, after all, far more difficult to subvert in a transparent environment as extreme voices are more rapidly exposed and argued away (which is one of the reasons we have proportionally fewer radicalised individuals in the UK and USA than, say, Afghanistan)

This is a pivotal point for humanity.  We are facing a potentially catastrophic situation with a global population struggling to find security in food and water supplies, together with shortages of energy- and more frequent incidents of extreme weather, war, and economic instability.   Many of these issues have been caused by short-sighted policy makers who either bow to their own, or corporate interests- at the expense of the population (for example- had policymakers been able to work together instead of fighting petty differences- the world would probably be food and water secure right now, with most of the 2billion hungry not dying…)

Our history now will be determined by our response to this change.  Will we embrace technology and realise that we can finally have true democracy (rather than various pseudo-authoritarian regimes)? or will we find an environment where a small group of individuals subvert everyone’s freedoms with continuing use of censorship, force, and economic control.

The utopian former case is well within our capabilities- but it would take a paradigm shift in political attitudes (even in the liberal west) for this to be enacted.   In the latter case, there will inevitably be a breaking point as, without fail, humanity always finds freedom.

“There is no such thing as a little freedom. Either you are all free, or you are not free.” Walter Cronkite

Up Next: Managing Risk in Fixed Income Markets