The Truth About Executive Pay 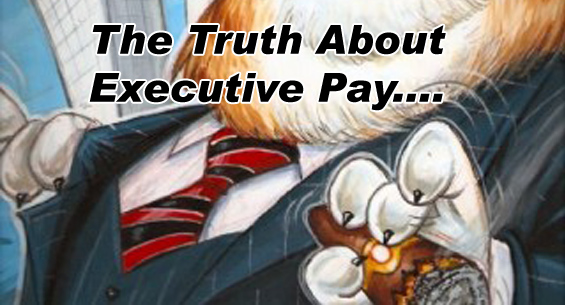 There is little doubt that we are facing tough times for the economy.  Rising unemployment, austerity and many other factors have meant that the average person feels considerably worse off than at any other time in recent history.  It is unsurprising therefore,  that we are witnessing a backlash against senior executives (in many industries) who are taking home multi-million dollar pay packages.

From board actions and shareholder revolts, to grassroots protests and the Occupy Movement– hundreds of thousands of people have rallied together against what they perceive as being the manifestation of gross inequality. “Former fashion jewellery saleswoman Rebecca Gonzales and former Chief Executive Officer Ron Johnson have one thing in common: J.C. Penney Co. (JCP) no longer employs either…” wrote Bloomberg in April 2013 adding, “The similarity ends there. Johnson, 54, got a compensation package worth 1,795 times the average wage and benefits of a U.S. department store worker when he was hired in November 2011, according to data compiled by Bloomberg. Gonzales’s hourly wage was $8.30 that year.”  Even leading academics have joined the debate.  Interviewed in the article referenced above, Roger martin (dean of the University of Toronto Rotman School of Management) states, “When CEOs switched from asking the question of ‘how much is enough’ to ‘how much can I get,’ investor capital and executive talent started scrapping like hyenas for every morsel… It’s not that either hates labour, or wants to crush their lives. They just don’t care.”

To learn more about the true state of executive compensation, I spoke to Steven N. Kaplan who is Neubauer Family Distinguished Service Professor of Entrepreneurship and Finance at The University of Chicago Booth School of Business.  He was named one of the top twelve business school teachers in U.S., Business Week, 1994, and one of the top four business school entrepreneurship professors in U.S., Business Week, 1996.  In 2012 after extensively researching executive pay and compensation, Prof. Kaplan published a paper titled: Executive Compensation and Corporate Governance in the U.S.: Perceptions, Facts and Challenges

Q: What are the key complaints levied against executive pay?

[Prof. Steven Kaplan] The key complaints are the views that CEOs are overpaid, not paid for performance and that boards don’t penalise them for poor performance.  You see these views with some regularity in the media…  Just recently Gretchen Morgenson of the New York Times said in an article, “…Raises may be hard-won for most American workers these days, but for those fortunate few in the executive suite, the pay increases just keep on coming.”

Q: What has caused the backlash against executive pay?

[Prof. Steven Kaplan] The numbers are big!  We’re in a tough economy- we had a financial crisis, and there’s lots of unemployment.  Against this, the CEO of an average S&P 500 company makes around US$ 10 million per year (the average is around US$ 8 million).  It’s a lot of money! First and foremost, that’s where the perception comes from….  It turns out that’s less money than they made 10 years ago, but it’s still a lot of money…

Q: From your research, what are the real patterns that exist in executive compensation?

A lot of CEO pay is issued in restricted stock and options, so it can’t help but be related to performance.  Boards have also got tougher when it comes to firing CEOs.  The average term in office for a CEO in the 80’s and 90’s was around 8 years.  Since the late 90’s that’s gone down to roughly 6 years.  So not only has average pay gone down, but the job has got riskier.

In the late 90’s you saw the outliers in pay coming from the tech industry.  Today it’s the entertainment industry where you find pay levels that are hard to understand.  Viacom and CBS are mentioned frequently in this regard.  They are both controlled by Sumner Redstone and he pays his CEOs much more than the average S&P 500 CEO.  Some of those numbers are puzzling….

Q: Why are executives paid so much?

[Prof. Steven Kaplan] There is a real disconnect out there.  Corporate earnings have increased markedly since 2000.  Inflation adjusted net income for S&P 500 companies since 2000 is up over 50% – but executive pay has come down.  If you look at how corporations have performed, they’ve done really well! You hear one set of complaints from the press about how companies have a record amount of cash, and how corporate profits as a percentage of GDP are so high- but at the same time- those same people criticise boards and CEOs for poor governance.  That’s inconsistent …. If corporate profits are high, it suggests performance has been terrific… you can’t then complain that governance is broken!   You can’t have it both ways…. if corporate governance was better, profits would be even higher!

Particularly from 1980-2000, there was a real change in technology around the world.  This allowed talented, fortunate or educated people to reach broader assets and geographic areas.  As a result, many people such as hedge fund investors, private equity investors and so on- have done really well! They can manage large pools of money which they simply could not have done 30 years ago.  Lawyer’s pay has also gone up in the last 20 years- why? they can work on bigger deals and get information more quickly.   Athletes have done very well too- they can now garner large audiences as a result of technology!

Technology, scale and globalisation has helped people involved in business- and led to increased incomes for many groups.    The conundrum we have in society is that many of the ‘less-skilled‘ members of the population have not done so well from these trends and that’s part of the reason for backlash.

People also lose sight of the fact that technology driven globalisation has been extremely beneficial for a lot of people outside the US.  Hundreds of millions of people have been lifted above the poverty line in India, China, Africa and elsewhere.

[Prof. Steven Kaplan] Some of this is a distraction…  For example, JP Morgan’s recent shareholder vote about separating the role of Chairman and CEO must have been a distraction for some time… that couldn’t have been good for JP Morgan.

In the UK, pay has increased- so the differential between the UK and US has narrowed over time, but now there seems to be some backlash there also.  Switzerland has had some backlash, and there’s some talk of limiting top executive pay.  If you impose draconian measures you will see- for example in Switzerland’s case- that nobody will want to locate there!  Some of these measures have the chance to create competitiveness problems.

In the US, I don’t think you will see any more legislation coming into place in this regard- it is where it is. Elsewhere around the world, I think you may see actions taking place.  Any restrictions will not be good for those countries.

Q: Is there a solution for the backlash against executive pay?

[Prof. Steven Kaplan] When the economy does better and job creation improves, you will see less attention to the higher numbers.  When the numbers got very large in the 90’s, there was some discussion- but because the economy was doing well- there was less focus.  The scrutiny and backlash is greater when the economy is not doing well because people are hurting.

The best thing is to get the economy moving and get employment growing.

In an interview with CNBC, Warren Buffet commented on executive compensation saying, “…I feel fine with people making a lot of money for doing a great job…. what I object to is the people that the– the biggest payday of their life is the day that they leave a company from which they failed, or– or where they get paid automatically big sums. If you want the shot at the brass ring– if you want a shot at making tens of millions of dollars a year, if you flop, why in the world should you be making $5 million a year, or $3 million a year? ….pay for performance is fine, you know. Pay for showing up is not– with the– with the huge goodbye present, you know– or– or bonuses that are not tied to real performance, I think that’s terrible.”

The uncomfortable truth is that the very companies against which the backlash is raised, are those which are critically important to the economy.  As Warren Buffet identified, there is absolutely no justification in bumper paydays for executives who have not performed, but the ones that do perform- often do so tremendously well- creating business which return wealth to shareholders, preserve wealth for tens of thousands more who invest in them through their pension funds- and that doesn’t even factor in the job creation, trade and other benefits they bring to an economy.

The world has moved on tremendously in the past quarter century.  Our star performing companies are growing faster, more globally, and more aggressively than ever before.  That kind of growth needs good, competent and skilled leaders.  To put it in perspective, the total compensation for CEOs of the S&P 500 companies is around US$5 billion or, to put it another way 0.005% of the profits made by that same group of businesses in any given year.  Surely that is a fair price to pay for such good returns!

Up Next: Are Women Suffering the Greatest Injustices in Human History?