Thinking Ourselves into Another Recession 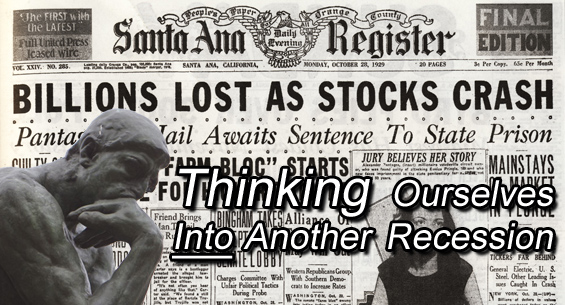 Reporting on the increased perceived risk of a double-dip recession, the Huffington Posted noted how there is “..a growing sense of doom among some prominent economists“.  They went on to cite Nouriel Roubini, the cofounder and chairman of Roubini Global Economics and a professor at New York University’s Stern School of Business, who stated the, “Risk of a double dip recession in advanced economies (US, Japan, Eurozone) has now risen to 40%.” along with Mohamed El-Erian, the CEO of PIMCO, the world’s largest bond investor, who stated that, “the U.S. faces a 25 percent chance of a double dip and deflation.”

Analysts overwhelmingly credit this risk to three factors.  Firstly, the continuing weakness in the jobs market.  Secondly, a stagnant real-estate market (private and commercial) and thirdly, a weakening economic outlook from central banks.  At first glance, these would seem reasonably valid explanations, although we could be suffering from a mass episode of the “Post hoc ergo propter hoc” fallacy, which inclines individuals to believe that “Since that event followed this one, that event must have been caused by this one“.  This would be akin to giving credit for the sun rising every day to a specific rooster crowing.

Anyone watching the markets will also be acutely aware of the variety and quantity of economic measurements being released.  Rather than (as it was pre-crisis) this data being interesting academic reference to support policy and other decisions, it is now becoming the trigger for (often) devastatingly large movements in the market- from investors shifting liquidity between equities, bonds, treasuries and other instruments- to central banks injecting, removing, and enabling liquidity in their markets.

An interesting analogy for this behaviour can be found in medicine.  Specifically, in the study of eating disorders.

Dr. Neel Halder is a  Psychiatrist, Medical Education Fellow and Leading Writer.  He explains, “Those suffering Anorexia Nervosa are obsessed with weight, checking sometimes 30 times a day, and keeping a close reign on their weight.  A pound gain in weight can be perceived as terrible.  For those with Bulimia Nervosa, weight checking does occur, but their weights do tend to vary widely, and sufferers struggle to keep a tight reign on their weight.  Most are either normal or slightly overweight, but tend to binge eat and make themselves throw up (purge).  This causes the poor control of, and fluctuations in, their weight.  Often this is combined with poor motivation and other personality attributes.  Unfortunately, it tends to be females who are the most affected by these conditions- influenced by external factors, they will check their weight very regularly, and do everything they can to lose weight- but then will lose the motivation, willpower and focus to control it.  In another sense, we see this in New Year’s Resolutions, with everyone talking about getting healthy, going to the gym, and so forth, and then very quickly losing the momentum and willpower to keep this up.  Only a small, really dedicated group of people manage to maintain it.”

While, at first, this may seem like a strange analogy, it is important that we accept that we give a certain anthropomorphic quality to our economy, visualising “it” as a living entity, with its own behaviours, moods, and so forth.

In this context, we see the economy (globally, and nationally) behaving in much the same way as a Bulimia sufferer.  Economic weight is checked through fundamental data (with figures such as GDP, employment, real-estate, CPI, RPI, commodity price indexes, equity indices, and more) and economies struggle to keep a stable ‘parity’ moving through periods of boom (akin to binge-eating) and bust (akin to the purging described above).  In a similar sense, external factors such as the data released by other nations, and expectations driven from key analysts also provide added pressure to economies to perform to certain parameters, further causing the binge/purge behaviour (often exacerbated by central bank and other interventions in the marketplace).

Bulimia is identified as a psychological disorder, because it involves people, we do not see it as a systemic disorder (i.e. a virus, or bacteria) yet with the economy, we seem to forget that while we may talk of “it” as an entity in it’s own right, the economy is a human network- with individuals (from shop-floor workers to central banks) who participate in markets, driven by emotion.

When we talk of economic confidence, business confidence, or even confidence in global markets, we are talking of the mindset of the majority of participants in that market.   In a ‘booming’ market, participants feel happy, with little sense of risk- so they are happy to invest in their businesses, create jobs, buy property, and drive strong economic figures.  In a recessive ‘bust’ market, we see a standard human predator response, “a flight to safety” where participants hoard their capital, run towards safe assets, cease creating employment, cease purchasing property, and create an overall dip in economic figures.  The latter scenario can also be likened to human depression, which has psychological symptoms including  “Low mood for most of the day, nearly every day. Things always seem ‘black’” (akin to our economists talking down the economy, constantly), “Loss of enjoyment and interest in life, even for activities that you normally enjoy” (akin to a loss of investment, trade and standard activities in an economy), “Poor motivation. Even simple tasks seem difficult” (akin to the fits and starts we see with recovery, no real momentum building), “Irritability, agitation, or restlessness. Recurrent thoughts of death. This is not usually a fear of death, more a preoccupation with death and dying. Some people get suicidal ideas such as …’life’s  not worth living’” (akin to our recurrent fear of another recession, and use of measures such as the VIX ‘fear index’).

The reality is, for our economy to recover, we as participants must cease looking outside for reasons to be happy, and realise that it is our participation within the economy that drives it- from spending in stores, to investing in business, creating jobs, and more.   It is a well known fact (albeit a rather sad one) that war and conflict are a great driver for western economies.  Fighting (and hopefully winning) a war abroad diverts the attention of economic participants around another goal, and winning battles often secures a collective sense of positivity which is then seen elsewhere in the economy.  The same is true of sport with a key paper showing that, “… a Super Bowl victory increases the personal income of the individuals in the metropolitan area from which the winning teams come.”

The important lesson, therefore, is for us to realise the psychological battle the economy is facing- being a state of collective depression, with markets moving through a daily motion of binge and purge- leading to either a collapse into increasing volatility, or… if we collectively gain positivity, a move towards greater wealth, and economic success.  This isn’t new logic though, as Buddha himself once said, “We are what we think.  All that we are arises with our thoughts.  With our thoughts, we make the world.”

Up Next: The Greatest Threat Our Species Has Ever Faced