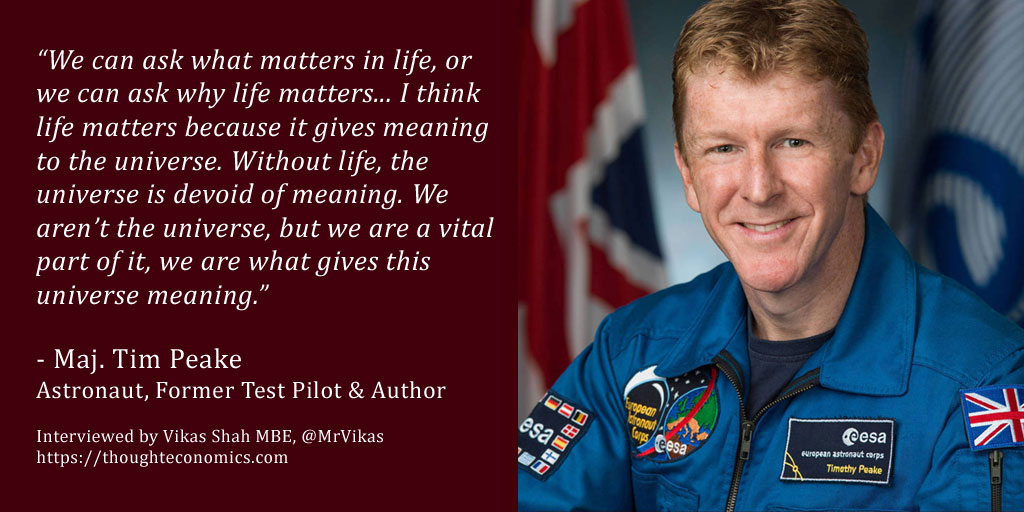 Tim’s bestselling books include: Hello, is this planet Earth? (Century, 2016) Ask An Astronaut (Century, 2017) and The Astronaut Selection Test Book (Century, 2018) His remarkable and inspiring autobiography Limitless (Century, 2020) charts his surprising road to becoming an astronaut, from a shy and unassuming boy from Chichester who had a passion for flight, to a young British Army officer, Apache helicopter pilot, flight instructor and test pilot who served around the world.

In this exclusive interview, I speak to Tim Peake about our fascination with space, how seeing the earth from International Space Station changed his view of humanity and his learnings on resilience from training to be an astronaut and spending 186 days in space.

Q: Why are we fascinated with space?

[Tim Peake]: Our fascination with space links to the unknown. As far as we know, space goes on for infinity, and yet is expanding at an ever-increasing rate. What is out there? We only understand about 5% of the universe, the rest is made-up of dark energy, dark matter and things we’ve yet to fully understand. Space triggers that innate curiosity in us about what’s out there, where we came from, and the possibilities those answers could bring.

Humans are explorers – our imaginations can run wild- it’s in our DNA. Our fascination with space links to our ability to dream, to wonder, to be curious and to have big ideas.

Q: How did space travel change your understanding of humanity?

[Tim Peake]: My understanding of humanity was changed more by working in the space industry than space travel itself. It opened up my eyes to what international collaboration can really achieve. I’d travelled around the world and worked in different countries and multicultural environments before, but the space industry and scientific community seem to transcend all that. When you travel to Japan, Canada, Russia, America and across Europe you realise that you’re involved in this incredible international space station that’s been occupied for 20 years and which simply couldn’t have succeeded if it wasn’t for everyone collaborating together and working towards a common goal. That has changed my view of humanity more than actually seeing the planet!

When you look down on planet Earth, it’s very profound. It changes you as a person and changes how you appreciate our home. There’s a rational conscious part of you that says, I’m detached from planet Earth… I’ve escaped gravity and am now orbiting the planet seeing Earth against this black background of the universe…’ yet – it’s just unbelievable. You get to see the beauty and fragility of the planet.

Space is a pretty scary place. Here on Earth, we’re surrounded by nature and a nice blue sky. You don’t realise that 16km above you, things start to go black…. 100km it’s an inhospitable vacuum that will kill you in less than 60 seconds. Think how far we’ve come as humanity- we’re a living species who have managed to escape our own planet.

Q: How did seeing the earth from space impact your understanding of climate change?

[Tim Peake]: From a pure data perspective, we get 50% of our data on climate change from Earth observation satellites, they give us a finger on the pulse of the planet. Without that understanding, how could we possibly implement change?

Over our 6-month mission on the International Space Station, we clearly saw the impact of humanity on our planet. We saw the massive deforestation of the Amazon; we saw the massive impact of pollution around the world… the swathes of smog in the Kathmandu Valley and the Himalayas… the pollution over Beijing. Our resources are finite. I was born in 1972, when there were about 4.5 billion people on the planet. Today, there are twice as many and when my children are my age there will be- perhaps- 12 billion people. We have to protect our planet and realise our resources are finite.

Q:  What did you learn about mental and physical resilience during your astronaut career?

[Tim Peake]:  We train a lot, preparation is key. Even in the military, we had a saying, ‘train hard, fight easy…’ – when you’re in space, you don’t want to be doing anything for the first time (if you can help it). For anything we do in space- be it a spacewalk or a robotic capture- we prepare and train. It taught me the importance of absolute focus, concentration and attention to detail. Mistakes in that environment have serious consequences.

Space also taught me that when you think you’re at 100% of your physical or mental capacity, you’re not. We have enormous reserves within us (which we don’t tap into for good reason), but we are all capable of pushing ourselves a lot further than we think.

Q:  How do you deal with fear and uncertainty as an astronaut?

We have to focus when we’re afraid and concentrate on what it is that’s causing us fear. Addressing fear is the very first thing you need to do, without working that part out, you can’t act and make the necessary changes.

Fear is tackled through preparation, training and knowledge. Those are the things you need in your toolbox so that when things go wrong, you have options.

We fear the unknown, but the less you know about something the more knowledge there is to gain, and hence the less afraid you will be. When you understand a situation and are fully prepared having analysed the risks and mitigated them- you may well still be apprehensive, and that’s normal. That’s where mindset kicks in. How much of a risk are you willing to take? How well do you know your limits? How do you cope when things go wrong?

Q:  What did learn about leadership from your astronaut career?

[Tim Peake]: Being in space taught me a lot about leadership, especially coming from 17 years in a military environment where an autocratic system of leadership is more prevalent. To be clear, there’s a reason for that. If you’re on the front-line of a combat zone, there isn’t the room for discussion and sometimes you have to just follow orders. In space, and certainly on the International Space Station, everybody is a leader- there are so many complex, moving parts.. there are so many pressures on the system an teams around the world… You have a commander of the space station, but then everyone is their own team effectively managing the complexity. It’s an environment where listening is very important, and an environment where followership is equally as important as leadership. You need to understand what everyone is trying to do, and why.

Ultimately, the thing that gels everyone together on board the space station is the fact that we’re working towards a common goal and have a very clear vision and strategy of what those goals should be.

Q:  How did you learn to handle public profile?

[Tim Peake]:  When I first joined the space agency in 2007, it was very unusual for me to be in the limelight. In the military we tend to have a very low public profile, though we are very used to speaking and engaging with people. As an astronaut however, you’re an ambassador for space. It’s very important to communicate what you’re doing and why- we’re spending taxpayers’ money, so communicating the importance and relevance of our work is critical.

As you go through training, you gain more knowledge and experience about communication. When I was assigned to this mission- it was almost 21 years since Helen Sharman (the first British astronaut) had flown to space. We were keen to make the mission as much about inspiration as about research as we were keen to get the younger generation involved in science, technology, engineering and maths. This is something I personally am very passionate about – so that part of my job never felt like work, it felt like a pleasure.

[Tim Peake]: If there was one thing was going to say about my legacy- it would be that I hope that people take inspiration from the fact that I came from a very ordinary background. I grew up in the UK and left school aged 18. I was a slightly below average student academically but worked extremely hard and enjoyed the journey achieving things that I sent my heart on.

I hope that’s a message to other people who might find themselves in similar situations that you must never give up, you must have self-belief and confidence in your ability to achieve.

Q:  What matters in life?

[Tim Peake]:  We can ask what matters in life, or we can ask why life matters. I think life matters because it gives meaning to the universe. Without life, the universe is devoid of meaning. We aren’t the universe, but we are a vital part of it, we are what gives this universe meaning. I also think life is about kindness… and living your life with the values that give you kindness.

Up Next: Regional and Global Economic Integration