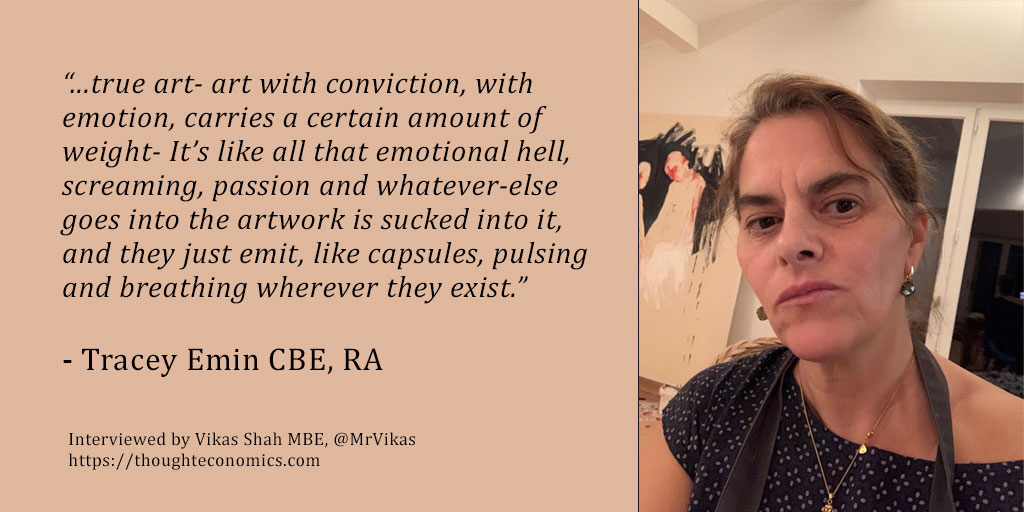 “We write for the same reason that we walk, talk, climb mountains or swim the oceans…” said Maya Angelou “…because we can.  We have some impulse within us that makes us want to explain ourselves to other human beings. That’s why we paint, that’s why we dare to love someone- because we have the impulse to explain who we are. Not just how tall we are, or thin… but who we are internally… perhaps even spiritually. There’s something, which impels us to show our inner souls. The more courageous we are, the more we succeed in explaining what we know.”

That formula; where success is a function of courage, is perhaps why Tracey Emin CBE, RA has risen to become one the foremost artists of our generation.  Her work is provocative, introspective, beautiful and challenging – and has achieved iconic status not because of the art establishment, but in spite of it.  Tracey is a fighter- and has defending her art and her method at every stage of her career, refusing to adapt to the parameters of the art market, but instead ensuring that she speaks form a place of creative honesty and truth.

In this exclusive interview, I had the privilege of speaking to Tracey Emin CBE RA to learn about her work, creative process and the role of art in our lives.

Q:  How did art come into your life?

Q: Does art help us during a time of collective experience (such as the covid pandemic)?

[Tracey Emin]: Sadly, I don’t think art does help us right now; what plays the main role is social media, television, and those forms of communication.  Social media is the god now.

Most people would have a nervous breakdown if they didn’t have their phone for a day; I would have a total breakdown if there was no culture, no art.  I couldn’t live without art, it would be impossible.  People don’t even realise the value of art, they take it for granted.

Honestly, after this [covid pandemic] – if there is an after this, people will view things very differently…. They’ll understand there’s a lot of things they don’t need anymore.  They don’t need hundreds of clothes, millions of magazines.  There’s so much stuff we think we need, but we don’t.  Art is different.  True art, real art, real creativity, comes from somewhere else.  It isn’t about a picture or decoration- there’s a divinity to it…

Q:  Is there a beauty to darkness?

[Tracey Emin]:  If you look at Goya’s Black Paintings, they’re really menacing.  They’re really malevolent, heavy, but also beautiful- because they’re true.  There’s a beauty in the truth which is undeniable.  It’s a tragedy in a way- sometimes we just need to understand what the hell we’ve truly lost.

Q: How do you choose your medium?

[Tracey Emin]: My whole life, I’ve been learning and practicing, and learning again – I want to understand how to create things, how to make things.  Right now, I’m back to painting again- this is my thing.  When I’m old, really old, I might go back to sewing- it’s an easier thing to do- especially when you’re an old lady.  For now- whilst I’ve got the energy and the physical strength, painting is my thing.  I’m throwing paint around physically and making my art.  I don’t have these assistants around me, we don’t have a discussion about where the paint goes, it’s energetic- it’s a physical battle between me and that thing.

Q:  Where does your art come from?

[Tracey Emin]:  These days, my art comes from the physical aspect of the paint- but quite often, I might start off with a drawing on the canvas.  Even if it’s a really good drawing, I just throw paint all over it… I cover it up, turn it upside down, and start again… Sometimes a painting goes through this process a number of times.  The other day, we carried a blank canvas, and one I’d painted on, god… it was like twice as heavy, maybe three times… just because there were so many layers of paint on it.  When you looked at the painting though, it was linear… gentle… light… effortless… but it wasn’t, I’d painted over it again and again and again till it was what I wanted.

Sometimes, I’ll do a really good painting and then I paint over it.  That annoys me.  That really annoys me.  But there’s a reason why I do that, and part of that is because I want control.

Q:  What pieces of your art do you think have the greatest echo in society?

[Tracey Emin]:  25 years ago, nobody knew who the hell I was, you can only look at my work in retrospect.  It’s easy for people to look at my work now and go, ‘oh… the tent…’ or this and that… or ‘the bed…’ – Actually, My Bed is a really good example; I really had to defend it, and I defended it at every opportunity that I could.  I never made jokes about it, I took it seriously.  That was over 20 years ago- when life was a lot of fun for me- but when it came to that piece? god help anyone who made a joke about it to my face; I’d tell them exactly what the bed was about.  Had I not defended it and stood by it, I think it could have disappeared into history- but because I protected it, stood up for it, believed in it and understood why it existed and what it had done? That’s why it still remains.

People had to understand that My Bed was art; a lot of people said it wasn’t art- and that it really upset them.  They didn’t want to be reminded of their own vulnerability.  That bed is a time capsule of a woman, and that annoyed people as well.  Now the art has its position within the establishment, it’s become seminal… untouchable… it can’t be knocked down… so it was worth me looking after it and defending it.

This is all part of an artist’s order, it’s part of what happens as you grow as an artist.  Just look at an actor’s career.  I was watching this thing on Jane Fonda the other night.  She went from playing Barbarella to being a hardcore feminist and protesting against the Vietnam War.  That change happened in 6 months; she said it was because she didn’t realise how much sexism and misogyny there was in the world.

We all have to grow up and move through different things; there are things you’ll always go back to, and things that do remain.  For example, I love Edvard Munch – I’ve loved his work since I was a girl and I will always love it.  Emotionally, politically, historically, so many things change as you get older- some things get stronger, and some things you just don’t give a fuck about anymore… some things you get more forthright about, some things you become more articulate about… that’s how it is with an artist and their work.

Q:  Do we still have gender or ethnic barriers in art?

[Tracey Emin]:  I’m half Turkish-Cypriot.  My Mum’s family were gypsies, and my dad is really dark skinned- he came here in 1948 on a £10 ticket from Cyprus.  His grandfather was from Sudan, and his Great Grandfather was a slave in the Ottoman Empire.  My Dad’s family were known as Black Turks… There were tehse slaves that were given their freedom in Cyprus, known as the Black Turks, and that’s my Dad’s background – meanwhile, my Mum… full blown Gypsy!

Somehow… if you said to someone what my ethnic background was? Where does Tracey Emin come from? Most people would say London, British, YBA. I am British, but I am much more than that.

Growing-up, I was quite up on culture and my background, but it wasn’t something I carried with me, as I had to get through the system.  You had to play on an equal footing with everything, otherwise you’d get caught-up in the class system, and once you did that- you’d get nowhere at art school.  The majority of people in art school come from privileged and privately educated backgrounds, that’s the nature of art….

Q:  What would be your advice to the next generation of artists?

[Tracey Emin]: Today, there are so many more galleries, museums and platforms for artists than ever before.  Outside London it’s a million times easier because it’s easier to get a studio, and cheaper to live.  I think it’s virtually impossible to start off as an artist in London if you don’t have money.  The first bit of advice I’d give to artists? Get out of London.  It’s not a good creative place any-more.  There’s no short-life housing, there’s no short-life studios… there’s no infrastructure for artists any-more and you’d do better by going somewhere else.

I’d also encourage artists to get a job doing something they like.  If you like books? Get a job in a book shop… if you like food? Get a job in a nice restaurant… if you like gardening? Do gardening.  I tell every art student to learn to make curtains… if you get some money for your 21st birthday? Go spend it on a curtain making course.  You can earn £1,000 a day making curtains.  You need to use your initiative, use your head, and not be brow-beaten.

When I left art-school, times were different, there was literally no jobs, nothing out there.  Times are different now, it’s a different world.

[Tracey Emin]: When I die, I’m going to leave the studio that I’m building in Margate as a museum, and hopefully I’ll be able to leave enough money to finance it for a few years.  I’ll leave it to Margate, and to the people, as a museum- maybe a research centre or whatever… I’ll put my money where my mouth is.  I’m lucky, I don’t have children you see- so I can choose to do what I want with my legacy, and also, I know what I don’t want.

As an artist, you have a big responsibility, and you have to take it seriously.

Tracey Emin was born in 1963 in London. She shares her time between the South of France, London and Margate, UK.

Her largest artwork to date, I want my time with you, is currently installed at St Pancras International, London. In November 2020, she will open a major solo exhibition at the Royal Academy of Arts, London. The exhibition, entitled The Loneliness of the Soul, will tour to the new Munch Museum, Oslo in spring 2021, followed by the unveiling of her permanent public commission The Mother for Oslo’s Museum Island.

Life Learnings from Being Held Hostage for Six Years in the Colombian Jungle – A Conversation with Ingrid Betancourt.

A Conversation with Ece Temelkuran on the Choices We Need to Make, Together, For a Better World.

On the Role of Death in Life: A Conversation with Sheldon Solomon

Up Next: War and Peace