My Interview with Vincent Kompany, Captain of Manchester City FC 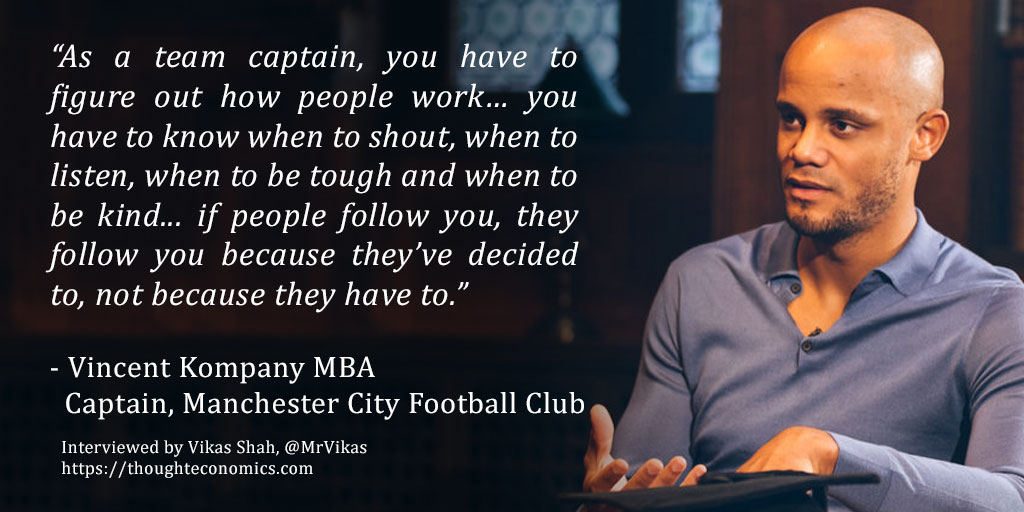 As Captain of Manchester City and of the Belgium National Team, Vincent Kompany has achieved huge success on the pitch.   Like many of his peers Vincent has immersed himself in playing football and being the best on the pitch- but perhaps most interestingly, he has also taken a deep interest in the business of football itself.

In 2017, Vincent graduated from one of the world’s most rigorous Global MBA programmes at Alliance Manchester Business School.  Alongside being a distinguished graduate, his dissertation looked at how professional football clubs in the Premier League can benefit from home game advantage and achieve game-changing levels of improvement.

I caught up with Vincent to learn more about the business of football, and what he learned doing an MBA.

Q:  What is the business model of elite football clubs?

[Vincent Kompany]: Football clubs are extremely complicated, and nowadays clubs are extending their reach through their brand and their networks of influence around the world.  For most clubs however, their business model is focussed around TV revenue, matchday income and commercial income.

One thing to note though; when we think of business models, we think they should be profit making- but at the moment, I don’t know of many clubs that are profit making.  Nowadays, owners have got a much bigger picture with their ownership that goes way beyond the club itself, into other sectors and areas.

Q:  Do football players need to think of themselves as businesses?

[Vincent Kompany]: As a player, you are your asset. You have to manage and keep your performance- as an athlete- at the highest standard.  This is key…. after all, you can’t market something that’s not working or performing well.

Alongside managing your performance, you have to surround yourself with the best advice and support, and this starts early. Imagine, you’ll have an 18-year-old who’s doing well- and you have to tell them to also become a business person…?

Players have to learn about business, about their brand, about their opportunities outside the game, but it comes back to one thing; your performance on the pitch.

Q:  Why did you decide to do an MBA at the Alliance Manchester Business School?

[Vincent Kompany]:  My mother passed away 10 years ago; and she was always someone who pushed me to get educated, and to work on my academic side.  She always made me remember that football could be temporary; what if I broke a leg? What if I lose my ability to play? She never wanted me to give-up my dreams, but to be smart and hedge my bets.  Her form of doing this, was education- and when she passed, this became more important to me; I wanted to make her proud.

I didn’t enjoy school; so, I wasn’t onto a good start! I tried to study in Germany, but the language barrier made this too hard for me…. In Belgium I wasn’t able to find a good fit for my needs… and then I came to England and found the MBA program at Alliance Manchester business School.  It was flexible, allowed me to go into as much depth as I wanted, and cover all the topics that were important to me and my learning.

The Alliance Manchester Business School was very supportive, they let me start one step at a time, doing modules as I went along; and then I went for it.  They gave me the flexibility to dip my toe into the water, and the support to then achieve the goal.

Q:  How did the Manchester MBA change your perspectives on football?

[Vincent Kompany]: I’ve always been interested in the factors that drive home advantage in football.  If you explore the psychology, you find that your dominant response (the way you perform a skill, for example) will be improved if the environment or atmosphere increases your testosterone levels and response.  We know that testosterone levels in players are higher when playing home games rather than away (with the exception of derbies) so my logic was to find what those environmental factors were that could keep testosterone levels as high as possible, in a natural way, at the start of the game- giving the team an advantage.

In my research I spoke to many players that validated a lot of my hypotheses, and then started looking at the business model impact.

If we go towards neutral stadiums where tickets are paid by the highest bidder (whether he’s travelling from Japan, China or America) you can achieve the highest price for tickets as for many it will be a ‘once in a lifetime’ experience; but because they’re neutrals it will invariably have an impact on home advantage, and if home advantage is impacted we have to understand the real value of losing points at home.

I came to the conclusion that clubs would be better of promoting strategies that induce home-advantage rather than fighting for higher ticket price because the incremental value of each point lost is higher than the value of those more expensive tickets.  If you drive your home advantage, your revenues go up!

The Manchester MBA also allowed me to explore the revenue models of football and media.  The premier league is the most exciting league in the world, and we have to adapt and change with technology to deliver the most exciting fan experience too.  We can’t just tick one box, we have to give fans the best products in all aspects of how they consume.

Q:  What are your views on how football clubs engage in CSR?

[Vincent Kompany]: The popular response would be to say that clubs need to do more, period.  I think we all need to aspire to do more in the community, but I can honestly say that in the last decade, there’s been huge progress in what English clubs do for their communities.

The Premier League does a tremendous amount of work in the community, and Manchester City in particular does incredible work, but it’s not just about philanthropy.  Take for example, the £200 plus million Manchester City spent on a training ground- most of that money went to local businesses, and in the regional business community, so football clubs have a wider- and more positive economic impact than many people realise.

Football clubs have a lot of community and heritage, and first and foremost they have to stand for something unique.  Once you have that value, you can then generate a relationship of mutual demands between the club, fans and other stakeholders.  This balance is critical; you cannot always be the person asking; you have to give, take and understand each other.  Something as small as a affordable ticket can make a huge difference to how someone in the community perceives a club… and ultimately, this perception, this brand is what generates more value and revenue for the club.

Manchester City has really been exemplary at this, our efforts on ticket pricing have been really positively received by our fans.

Q: What have you learned about leadership from team captaincy?

[Vincent Kompany]: I’m in a special position, being a captain is not the same as running a business or being a manager.  When you have the power to make decisions that will impact people’s lives, they have to listen to you.  As a captain however, you don’t have any power, but you still need to be able to influence people, do the right thing, and move people in the same direction.

My advice to young players today is really simple, you have to be the best you can on the pitch, but also to educate yourself, show an interest in the world, and not let football restrict you.  You have to be professional, put everything into your game, and realise that the better you are now the better your future will be as a result.

The way football is going, it will become more tactical, more strategic and so the more you open your brain, the better you will be; and doing this also means you will have a better life for the 40, 50 or 60 years you have after your playing career ends.

Vincent Jean Mpoy Kompany is a Belgian professional footballer who plays as a centre back and captains both English club Manchester City and the Belgium national team. In the 2011–12 season he was awarded the captaincy of Manchester City, leading his club to win the Premier League that season, their first league title in 44 years. He is also chairman of Belgium D3B Division club BX Brussels.

Kompany began his professional career at Anderlecht, spending three years at the Belgian club before moving to Bundesliga club Hamburg in 2006. In the summer of 2008, at the age of 22, he completed a transfer to his current club, Premier League side Manchester City. He has since established himself as an integral part of the Manchester City squad and is one of the bargain buys of the revolutionised City era, blossoming into one of the Premier League’s best centre-backs. Kompany was included in the Premier League Team of the Year for two years in a row in 2011 and 2012 as well as being included in the 2014 team, and won the Premier League Player of the Season in 2012. Regarded as one of the best defenders in the world, he was listed 23rd in “The 100 Best Footballers in the World” by The Guardian.