We Need to Re-Think Economics 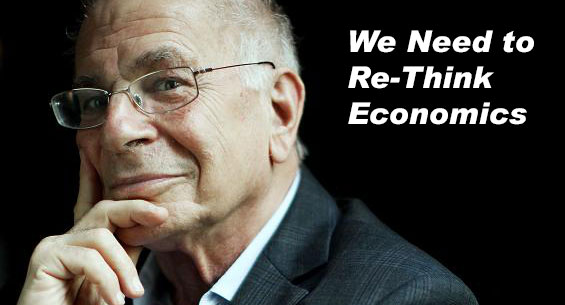 It’s curious how we treat the market as a phenomenon that exists outside us; akin to climate.  Our forecasts describe the oscillations and undulations of this entity with the accuracy we would expect from weather forecasts.  Tens of thousands of businesses, traders and other participants go-out, take-cover or make decisions on the basis of these words.  For longer than most market-participants would care to admit, the ‘invisible hand’ was seen as being the arbitrator of the economy, but in more recent times- we have started seeing things a lot more clearly.

A market economy is not an entity that exists outside us, but rather… it is ‘us’.  Markets are an amalgamation of the interactions of entrepreneurs (in all their forms), governments, and financial infrastructure providers (such as banks).  Whilst we tend to describe these as entities, institutions or so forth- the truth is, they are comprised of people who; while communicating using the universal language of data; in truth, are highly emotional – psychological – beings.

To really understand how economies behave, we must therefore understand the psychology of entrepreneurs and other key market participants.  To learn more, I spoke with Professor Daniel Kahneman, who is widely regarded as being the world’s most influential living psychologist.  In 2002 he was awarded the Nobel Prize in Economics “for having integrated insights from psychological research into economic science, especially concerning human judgment and decision-making under uncertainty”, work he undertook with the late Amos Tversky.   Kahneman is a Senior Scholar at the Woodrow Wilson School of Public and International Affairs at Princeton.

Q: What is the relationship between psychology and economics?

[Prof. Daniel Kahneman] The direction of influence has tended to be one way; which is sensible given the content of the two disciplines.  The issue is to what extent economists are interested in using more realistic psychological models than the ‘economic agent’.  There is now widespread agreement about this.  In a recent interview with the Wall Street Journal, Alan Greenspan even admitted that his own thinking had changed, being increasingly influenced by psychology.

The generally accepted idea used to be that even if there was odd behaviour on the part of individuals, the market would fix it by penalising individuals who were acting non-optimally.   This view is being challenged.  It’s being challenged by events and also theoretically.

There is definitely a conversation forming, but as to how far it will go? That is not for me to say.

Q: To what extent does our way of thinking have real market-impact?

[Prof. Daniel Kahneman] Understanding where people are likely to deviate from the standard rational model is useful, and this is where psychological analysis can make a contribution.

The simplest example of this is loss-aversion, and thinking in terms of changes rather than the final assets.  Another major contribution has been overconfidence and optimism.  Biases and the tendency to focus on individual cases rather than to develop policies are also important.  You also see a tendency where people learn insufficiently from the statistics of the past.

There are many characteristics of thinking which can have market impact.

Q: remembering versus experiencing self?

[Prof. Daniel Kahneman] The distinction is useful when you want to think about what utility is.  Utility is something that people experience, and not only something that they judge or take decisions on.  That’s a very significant distinction and is having an influence on the way we understand our markets and economies.

The distinction between the remembering self and experiencing self is otherwise a philosophically significant distinction, and usually placed in the sphere of understanding well-being.  Is it the well-being people experience moment to moment that counts, or how they evaluate their life.   By and large the evidence indicates that satisfaction is more important than experience, because satisfaction corresponds more to the goals that people define for themselves.

If you want to understand the mainsprings of human-action, then understanding the remembering self is more important than the experiencing self.

Q: Do we understand how heuristics and biases impact our decisions?

[Prof. Daniel Kahneman] There is a lot of evidence accumulating about the role of heuristics and biases in markets.  Recent research has shown that overconfidence in the CFO’s of fortune 500 companies has a real impact in company behaviour.

Heuristics and biases are significant in markets.  People’s experiences in the market clearly impact their behaviour; and in general, repeated experience may make people more rational- or closer to the rules of rationality.

There is still a lot of room for the influence of psychological factors in market outcomes.

Q: What is the impact of overconfidence in our markets?

Many entrepreneurs are deluded about their odds of success, that evidence is very clear.  This creates problems… Dr. Marta Coelho at the London School of Economics recently published a paper on the ethics of this very issue.  Should a government subsidise entrepreneurs who greatly over-estimate their chances of success?

Q: What are your views on the psychological origins of market bubbles?

[Prof. Daniel Kahneman] I have argued, along with Nassim Taleb, that one of the sources of overconfidence in our ability to forecast the future is the great ease with which we find explanations for the past.  That’s a very significant mechanism that produces overconfidence.

We see this behaviour in market bubbles.  Suppose that people recognise that there is a bubble going on.  If they could be assured that they would know when the bubble would pop, it would be perfectly rational for them to participate in it.  In the presence of uncertainty however, it may become irrational… Overconfidence manifests in bubbles in several ways.  There is a naïve form which doesn’t recognise the bubble, and thinks that real-estate will go up forever (for example).  There is then a second order overconfidence where someone recognises a bubble but feels they will escape it when other people don’t….

Q: Do we understand happiness as it relates to our markets and economies?

[Prof. Daniel Kahneman] We would like to understand happiness in order to evaluate how good people are at maximising their own happiness.  For that we would need a definition.  This would help us understand the role of advertising, the creation of needs (versus the satisfaction of needs) – and many other such philosophical questions around happiness and satisfaction.

Q: Do you feel economics and our understanding of the markets will look different in the future?

[Prof. Daniel Kahneman] There is a proverb in Hebrew that says that there used to be prophecy, but prophecy is now left for fools.

I am not enthusiastic about forecasting anything, but judging on current trends; economics and psychology are going to come closer together.  This is the trend at the moment.  We can predict this trend will continue for a while as many of the best graduate students are going into behavioural economics and neuro-economics.  For the next few days, there will be some very bright people developing this field.

Further than the next 20-30years? It would be absurd for anyone to even try and forecast…

Much of our thinking of economics is a legacy of how the discipline emerged.  From the earliest days of Plato conceiving the credit theory of money, through to the (ironically named) enlightenment, and even to present day- we have seen the economy as the realm of the ‘other’ – faceless beings, corporations and participants who work to maximise their utility in predictable ways.

Kahneman and his peers are teaching us that this simply is not true, and if we are to fully understand our economies, we have to start by understanding ourselves.

Up Next: How to Change the World