What the Volcano Taught Us about Business 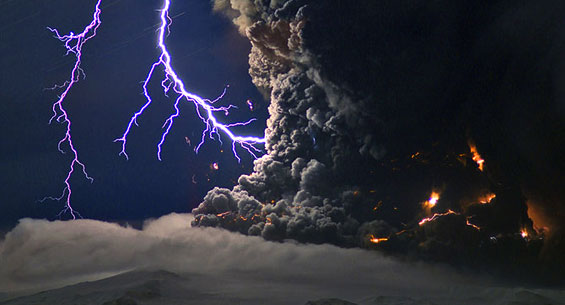 April 20 (Bloomberg) “Stranded flyers created a surge in demand for travel industry Web sites and remote conferencing services as a shutdown of many flights in Europe continued through a sixth day.”

The eruption of Eyjafjallajokull really caught the world off-guard, and created the levels of profound disruption which only natural disasters and war can. In most such crises (such as in the aftermath of the September 11th attacks) we used to assume that key websites (such as news, travel, and otherwise) would fall over under the load of web traffic. Interestingly, in this crisis, nothing broke. Websites (news, travel, social, etc) withstood immense loading, transactions were completed with little (if any) disruption, the global communication networks (mobile, and other) were able to deliver signal, and the digital-economy ran as normal. Global communication in situations like these is vital; University of Southern California has an infographic on how to best communicate in the global marketplace.

This phenomenon, where nothing-really-broke, is quite critical to understand ‘where’ we are with internet and communications technology. Whether we consider broadband and mobile infrastructure, server technology similar to what M247.com can aid some with so I’ve heard, software, or the ‘consumption points’ (phones, PC’s, etc) – there is observable proof that technologies are now mature enough to (broadly speaking) withstand peaks and troughs of usage, along with ‘delivering their promise’. In the latter case, video-conferencing is the key culprit of previously ‘talking a good game’ (insofar as the technology never really delivered on its promises) whereas now the phenomenon of video-conferencing has become an integrated and everyday part of communications on platforms including Skype.

If we try to understand the uptake of technology in society, there are two real drivers:

Looking at the latter case, and beginning with ‘Exclusion’. If we use ‘internet technologies’ as a paradigm, we can see there has been profound growth over the past decade of the nature of what the internet is used for. Initially, email was the predominant use, but as the internet has developed, it has now become an amorphous pool from where we consume and engage with all the facets of human-life. For any individual, regardless of their attitudes towards technology, there is a huge exclusion-risk of not being able to use the internet- insofar as, this would exclude them from being able to participate in society and, in many cases, access the services and resources which are required for efficient operation of one’s life. Exclusion risk also became apparent with mobile telephony and, in earlier senses, the television.

Turning towards crisis, we see technology uptake (be it permanent or transient) often taking place within crisis situations. The uptake of video conferencing during the Icelandic Volcano, the use of ‘neutral parties’ such as twitter as a communications tool by those in crisis torn countries, and (in a macro-trend sense) the uptake of renewable energies and efficient transportation in response to a crisis in energy availability and pricing.

In all cases, whether we look at exclusion or crisis, the actions of society were reactive in nature. Uptake was motivated by risk (exclusion) or necessity (crisis) rather than a proactive wish to progress.

Drawing a repeat-paradigm from my last article, “Learning Ethics from the Future of Warfare” – we can see that times of conflict, there is a proactive need and want to innovate. The “Cold War” saw huge advances in materials and space technology, and World War II saw great advances in nuclear and jet propulsion technology.

War is a unique event-theatre, simply as innovation life-cycles are so lengthy that to be motivated by ‘exclusion’ or ‘crisis’ would all-but ensure that you would lose the battle, as there simply would not be enough time to generate those innovations when society is consumed and engaged in war. Governments around the world, therefore, constantly innovate in all spheres of technology to prepare for the varied threats society faces ranging from war and conflict to biological threats (new diseases), and existential threats (natural disasters). These innovations eventually diffuse into society – for example “Aerogel” (an unusual material, developed in the 1980’s which looks like a frozen-fog) was initially developed to insulate the space shuttle and other space-hardware against heat and cold, but is now making its way into loft-insulation, and commercial buildings- there are many more such examples, but Aerogel itself is a remarkable material, and a great case-study for this diffusion.

A Change of Outlook

Society must learn a lesson from the military in this regard who see innovation and progress as necessary. For military theatres the necessity is drawn from the potential extinction risks in their occupation (be it the extinction of individuals, or entire countries) but for society, innovation and progress pose a similar risk.
We have been able to continue reactively where the pace of change has not outstripped our ability to react to it, but increasingly this is not the case and the pace of global change (driven by factors as diverse as globalisation, society interacting through the internet, and climate change) is pivotally now balanced with our ability to react, and soon will have a greater momentum than that.

Western societies have to heed the strategies of the east where innovation and progress are fundamental parts of their attitudes to business. Japanese carmakers, rather than being cheaper, built their sustainability from their constant ability to innovate. This has been true of all countries in the Asia region, where they are able to shave not just 10% off process-costs (be it manufacturing or service) versus their western counterparts, but often 60-80% (often bringing great improvements and advantages in the process). Not only does this make their manufacturing and service industries more competitive from a price and process perspective, but it also ensures they are more agile, and able to sustain that competitive advantage through continual innovation and development, realising that there is no guarantee of retaining market-share. Western economies, on the other hand, maintain a reactive stance, having built up short memories and a sense of de-facto arrogance about their dominance in global markets.

A famous quote (author anonymous) says of change, “There are really only three types of people: Those who make things happen, those who watch things happen, and those who say, ‘What happened?’” – which group would you rather be in?