When You Can’t Trust Economics 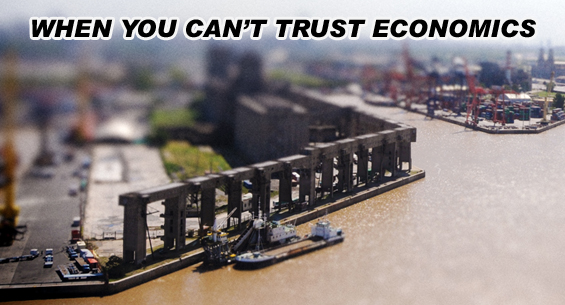 Has Conflict of Interest Created a Check-Mate in the Reporting of Economic Data?

In February 2012 The Economist took an astonishing step, removing Argentina from their much respected financial indicators page.   Their rationale being that, “…since 2007 Argentina’s government has published inflation figures that almost nobody believes. These show prices as having risen by between 5% and 11% a year. Independent economists, provincial statistical offices and surveys of inflation expectations have all put the rate at more than double the official number.”  They continue to note that, “…in an extraordinary abuse of power by a democratic government, independent economists have been forced to stop publishing their own estimates of inflation by fines and threats of prosecution. Misreported prices have cheated holders of inflation-linked bonds out of billions of dollars.”

The Inter Press News Service (IPS) also note how trials against Argentina’s 1976-1983 dictatorship have revealed economic crimes.  One prominent Argentine businessman they interviewed told IPS, “We weren’t involved in politics and had nothing to do with the government. But they took everything we had, our seven companies and the company plane. And it’s a miracle they didn’t kill us…” He later explained to journalists that government front-men, against these assets, took millions of dollars in loans from banks with ties to the dictatorship.  They defaulted on these loans taking down the companies against which they were secured and even the banks.  The Argentine Central Bank then auctioned off these [toxic] assets which were bought in good faith by others.

The Need for Trust

Around the world, government economists have a paradoxical role.  On one hand they have a clear remit to accurately quantify their nation’s economy and publish those figures in good faith…. but conversely they can be prone (through pressure) to ‘engineer‘ the figures in order to meet political objectives.  Examples of this are numerous, but the catastrophic misreporting of deficit figures by Greece is a notable incident (which has also now raised concerns over the accuracy of figures published by Italy and other PIIGS economies).

The fact remains that economic data is not merely a window-dressing exercise.  These are figures which can have a huge impact on a nation’s competitiveness.  Poor economic data can weaken currencies, reduce investment, and increase the borrowing costs a country faces.  In extreme cases (such as Greece) poor economic data can create a run on an economy with investors taking flight from equity and capital markets leading to a country’s own citizens losing faith in their banks.

For governments, independent economists and the media act as watchdogs.  In the overwhelming majority of cases misreporting is only identified where a government’s figures fail to corroborate with the consensus of independent research.  This is a somewhat effective system which does introduce a level of accountability for sovereign actors but fundamentally there is a need for a more robust global solution.

Following notable corporate and accounting scandals in the United States such as Enron, WorldCom and Tyco International (each of which resulted in billions of dollars of losses for investors), the Sarbanes-Oxley Act of 2002 was signed into law.  The crux of this act involved the creation of the Public Company Accounting Oversight Board (PCAOB) to provide independent oversight of the firms who report company data to investors and the wider market (the auditors).  The Act also set standards for independence, responsibility, enhanced disclosures, conflicts of interest, accountability and more.  Other countries have adopted similar legislations including The Companies (Audit, Investigations and Community Enterprise) Act of 2004 in the United Kingdom and the Financial Instruments and Exchange Act of 2006 in Japan.

At a transnational, two somewhat naive assumptions exist.  Firstly that governments must be honest and secondly that independent economists and analysts are free from conflicts of interest and will always report in good faith.  Given the sheer number and scale of incidents where both of these assumptions have been proven wrong alongside the astonishing complexity of economic interconnectedness, it is certainly time for a global solution.

The International Monetary Fund (together with their Independent Evaluation Office) go some way towards this within their mandate of fostering global monetary cooperation and securing financial stability, but the time has come for an organisation to exist with the sole mandate of providing independent oversight and reporting of country based economic data.  They would also adopt sole responsibility for the issuance and management of sovereign credit ratings against this data.  Such a body would require a degree of international co-operation which while difficult, is not impossible, and a level of autonomy which only comes from being supranational.

The net result would certainly be worth the effort as now, more than ever, stakeholders in a fragile global economy from central banks to individual consumers need to know that what they are seeing is, in fact, the truth… the whole truth… and nothing but the truth.

Up Next: The Three Marketing Principles That Scaled Over 3,000 Brands – A Conversation with Erik Huberman