Close Search ×
Order the Book Subscribe Free
Where Justice is Reached but Not Found.

Where Justice is Reached but Not Found. 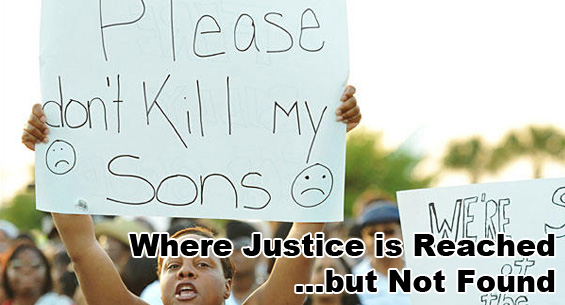 “Behold, the lewd, pornographic embrace of two great American pathologies…” wrote David Simon,  “Race and guns, both of which have conspired not only to take the life of a teenager, but to make that killing entirely permissible.  I can’t look an African-American parent in the eye for thinking about what they must tell their sons about what can happen to them on the streets of their country.  Tonight, anyone who truly understands what justice is and what it requires of a society is ashamed to call himself an American.”  He was of course, talking about the case of The State of Florida v George Zimmerman and, more specifically, Zimmerman’s acquittal of second-degree murder and manslaughter.

“Here is what we know…” wrote Justin Peters for Slate,  “Trayvon Martin died in Sanford, Fla., on Feb. 26, 2012. If George Zimmerman hadn’t been there, Martin would still be alive. Zimmerman found Martin suspicious. He called 911. A confrontation ensued. Beyond that, the facts are unclear. There’s not much physical evidence in the case. Other than the defendant, there are no eyewitnesses. Zimmerman claims that he was attacked by Martin, and that he shot him because he felt he was at risk of great bodily harm. We can certainly speculate as to whether or not he’s telling the truth, but can we say for sure? Zimmerman’s the only one who was there, and none of the prosecution’s witnesses came close to conclusively refuting his story.”

His co-writer Emily Bazelon added, “why did Zimmerman feel so very threatened? Why did he pull his gun and shoot to kill?  I don’t know. I don’t think we ever will. Zimmerman didn’t testify; he was never cross-examined. ‘Zimmerman the man may remain as much an enigma as the events of the night in question,’ Jelani Cobb wrote in the New Yorker earlier this week. And all of this focus on the moment of the shooting telescopes this story in a way that feels misleading. It leaves out Zimmerman’s history of calling the cops on black people and his decision that night to follow Martin. It leaves out his excruciatingly terrible, patently racist judgment.  But that doesn’t mean the jury’s verdict was racist…”

Many US states have ‘self-defence’ laws, and Florida is no exception.  Within their statute 776.013(3) it states that, “A person who is not engaged in an unlawful activity and who is attacked in any other place where he or she has a right to be has no duty to retreat and has the right to stand his or her ground and meet force with force, including deadly force if he or she reasonably believes it is necessary to do so to prevent death or great bodily harm to himself or herself or another or to prevent the commission of a forcible felony.”

And that hook was the defence used by Zimmerman’s team to allow him to be freed.  To convict Zimmerman, the prosecution had to prove (without doubt) that Zimmerman had not acted in self-defence.  A process made near-morally-impossible when the only person who knew the circumstances was the one trying to avoid being jailed.

Let us also be clear that this same branch of legislation that recently allowed a, “…31-year-old woman in a relationship with a man who had a history of domestic violence, and whose actions [firing warning shots into a wall] did not result in any physical injury, be sentenced to two decades in prison”.

Many have stated the obvious conclusion.  Adam Weinstein wrote (on twitter) that, “The legal lesson for Floridians: in any altercation, however minor, the easiest way to avoid criminal liability is to kill the counterparty.”

In this case dear reader, it would appear that while the law has been followed, the destination is far from justice.

Andrew Cohen writing for the Atlantic notes, “…to me, on its most basic level, the startling Zimmerman verdict — and the case and trial that preceded it — is above all a blunt reminder of the limitations of our justice system.  Criminal trials are not searches for the truth, the whole truth, and nothing but the truth. They never have been. Our rules of evidence and the Bill of Rights preclude it. Our trials are instead tests of only that limited evidence a judge declares fit to be shared with jurors, who in turn are then admonished daily, hourly even, not to look beyond the corners of what they’ve seen or heard in court… Trials like the one we’ve all just witnessed in Florida can therefore never fully answer the larger societal questions they pose. They can never act as moral surrogates to resolve the national debates they trigger. In the end, they teach only what each of us as students are predisposed to learn. They provide no closure, not to the families or anyone else, even as they represent the close of one phase of the rest of the lives of the people involved. They are tiny slivers of the truth of the matter, the perspective as narrow as if you were staring at the horizon with blinders on, capable only of seeing what was not intentionally blocked from view.”

Cohen concludes with startling clarity that “…What the verdict says, to the astonishment of tens of millions of us, is that you can go looking for trouble in Florida, with a gun and a great deal of racial bias, and you can find that trouble, and you can act upon that trouble in a way that leaves a young man dead, and none of it guarantees that you will be convicted of a crime.”  Note that under Florida’s flawed legal system, Zimmerman is now legally able to reclaim the weapon he used in the crime.

This writer also wishes to remind the reader that the USA is a country where not so long ago, it was legally upheld in law that discrimination on the basis of race and gender was permissible.

The Intuition of Justice

It would take many chapters of many books to fully understand the emergence of ethics and morality within culture, but we can observe (quite visibly) that many of the foundations on which such determinations are made are shared between all cultures.  The most profound of these shared virtues being a deep intuition of when something is just or unjust, when something is clearly right or wrong.

We place law on a pedestal as if its unblinking eye gazes watchfully over our society guarding the virtues of the just and unjust.  The fact remains however that the law (however we assess it) is a human creation… and like all human creations, and like our species itself, it is flawed.

The world’s courts are littered with cases like The State of Florida v George Zimmerman where our laws tells us that justice has been applied (by virtue of an individual standing to account)- but where our intuitions tells us that it has not been met.

We opened our eyes following this absurd verdict to a world where most-every parent looked at their child differently… knowing that Trayvon could just as easily have been their son or daughter.  This writer is neither American, Black or a parent yet felt utterly abhorred by the proceedings which have ensued.

President Obama himself on July 19 2013 in a surprise appearance at a media briefing stated: “…You know, when Trayvon Martin was first shot, I said that this could have been my son. Another way of saying that is Trayvon Martin could have been me 35 years ago. And when you think about why, in the African- American community at least, there’s a lot of pain around what happened here, I think it’s important to recognize that the African- American community is looking at this issue through a set of experiences and a history that — that doesn’t go away…” Adding some of his own experiences he continued, “There are very few African-American men in this country who haven’t had the experience of being followed when they were shopping in a department store. That includes me… And there are very few African-American men who haven’t had the experience of walking across the street and hearing the locks click on the doors of cars. That happens to me, at least before I was a senator….  There are very few African-Americans who haven’t had the experience of getting on an elevator and a woman clutching her purse nervously and holding her breath until she had a chance to get off. That happens often… And you know, I don’t want to exaggerate this, but those sets of experiences inform how the African-American community interprets what happened one night in Florida. And it’s inescapable for people to bring those experiences to bear.”

Where do we go from here?

“You have no further business with the court,” Judge Debra S. Nelson told Zimmerman, before telling him he was free to go.  For the defendant in this case, her words are largely true.  The case has been put into the prevailing mechanism of justice, and a technically accurate outcome has been met.  The time has come however, to fix the machine.

As a society we cannot (and must not) sit idle in cases where we see wrong.  We have mechanisms for change and can make our voices heard with votes, with lobbies, with protest, with open discussion and more.

It is the voice of the majority who ultimately will determine the shape of our future justice system, and it is the majority who did not fight sooner when seeing such injustices who- perhaps- have blood on their hands.  The net result being that all of our justice is compromised.

Up Next: A Conversation with Beth Simone Noveck on Solving Public Problems: How to Fix our Government and Change our World.