Where Killing is a Human Right 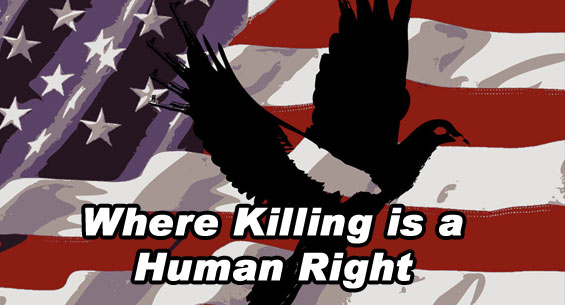 On December 14th 2012 Newtown, Connecticut– a small town with just 27,000 residents- became the scene of one of the most horrific mass-murders in modern US history.  A lone gunman first took his own mother’s life, before brutally taking the lives of 20 children and 7 adults at Sandy Hook Elementary School.

As the US magazine ‘Mother Jones’ note, “…it’s perhaps too easy to forget how many times this has happened. The horrific mass murder at a movie theatre in Colorado on July 20, another at a Sikh temple in Wisconsin on August 5, another at a manufacturer in Minneapolis on September 27—and now the unthinkable nightmare at a Connecticut elementary school on December 14…. Since 1982, there have been at least 62 mass murders carried out with firearms across the country…”

A horrified world shared the grief of the families of Newtown and in an emotional address, President Obama asked the people of the United States whether “…as a nation, …we’re meeting our obligations? Can we honestly say that we’re doing enough to keep our children, all of them, safe from harm?…” He was forced to state the obvious noting that, “…if we’re honest with ourselves, the answer’s no. We’re not doing enough. And we will have to change…“

Whether in defence or aggression, the ‘gun‘ has no other purpose than to cause harm.  It is one of mankind’s most ‘effective‘ enhancements- allowing us to supersede our biological weakness and kill efficiently, and in large numbers.

Such is the weight of importance given to this capability that countries such as the United States have enshrined the right to keep and bear arms into documents which set-out the fundamental rights of all citizens.  The second amendment to the US bill of rights (laid out in 1792) was designed for a different time, where the United States (and other countries) faced endemic mass-violence and pseudo-anarchy with a combination of slavery and the fight between conquerors and indigenous peoples.   As Jeff. D. Sachs points out however, “…since citizens’ militias are anachronistic, gun owners now use the second amendment merely to defend individual gun ownership, as if that somehow offers protection against tyranny. A reckless, right-wing Supreme Court has agreed with them. As a result, gun ownership has become perversely linked to freedom in the vast gun-owning American sub-culture.  But, instead of protection of freedom, Americans nowadays are getting massive bloodshed and fear….”

The Ideological Weapon of Choice…

The Joint Staff ’s DOD Dictionary of Military and Associated Terms describes Weapons of Mass Destruction as being, “…capable of a high order of destruction or causing mass casualties..” the definition also specifically excludes, “the means of transporting or propelling the weapon where such means is a separable and divisible part from the weapon.”

It would not be a great stretch of the imagination to see that guns are “ capable of a high order of destruction or causing mass casualties” while humans are clearly “the means of transporting or propelling the weapon where such means is a separable and divisible part from the weapon..”

While democracy in theory gives“…government by the whole population or all the eligible members of a state, typically through elected representatives…” the reality is that most democracies give government by the groups of a population who carry the most ideological weight.

This creates laughable real-life situations where (as Nicholas Kristof points out) “…we even regulate toy guns, by requiring orange tips — but lawmakers don’t have the gumption to stand up to National Rifle Association extremists and regulate real guns as carefully as we do toys….”

It also creates environments where people (through a perverse example of groupthink) genuinely believe that guns make them safer.  US Congressman Louie Gohmert stated in an interview with Fox News less than 24 hours after the massacre that he, “…wish[ed] to God she [the murdered Principal Dawn Hochsprung] had had an M-4 [US Military grade assault rifle] in her office, locked up so when she heard gunfire, she pulls it out … and takes him [the killer] out and takes his head off before he can kill those precious kids...

It’s time to realise that Weapons of Mass Destruction come in all sizes.  They don’t need to take the form of a single iconic bomb, they can be diffuse.   The ideology of gun ownership combined with its physical manifestation in the form of the gun itself creates a weapon that kills almost 30,000 Americans each and every year.

The horror of this situation is justified, but now is the time to act.  As Noam Chomsky states in his book ‘Understanding Power‘, “The people in the advanced countries now face a choice: we can express justified horror, or we can seek to understand what may have led to the crimes.  If we refuse to do the latter, we will be contributing to the likelihood that much worse lies ahead“

Up Next: Global Health