Close Search ×
Order the Book Subscribe Free
A Conversation with Whitney Johnson on Smart Growth: How to Grow Your People to Grow Your Company 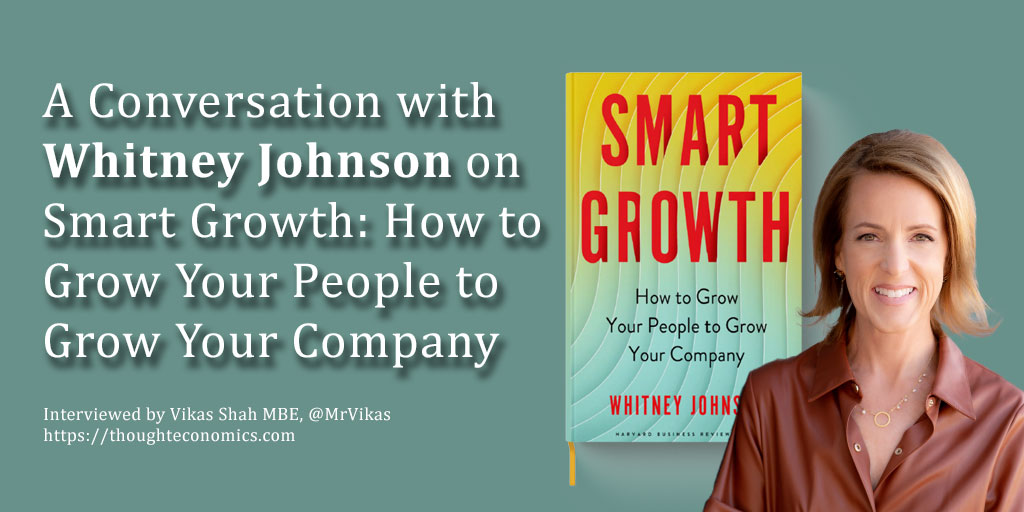 Growth is the goal. Helping people develop their potential—enabling them to articulate and become the self they want to be, are capable of being, and that best serves them and others in the short and long term—is what we as individuals and leaders strive toward. But how do we grow? It turns out it happens in a predictable way, which means we can understand where we are in our growth and chart a way forward.

Whitney Johnson is CEO of the tech-enabled talent development company Disruption Advisors, (an Inc. 5000 fastest-growing private company in America) and is of the top ten business thinkers in the world as named by Thinkers50, Whitney is an expert at smart growth leadership. Whitney was co-founder of the Disruptive Innovation Fund with Clayton Christensen. Her role included fund formation, strategy, and capital raising. They invested and led the $8 million seed round for South Korea’s Coupang ecommerce platform, currently valued at $50 billion.

In this interview, I speak to Whitney Johnson about her latest book, Smart Growth: How to Grow Your People to Grow Your Company. We discuss the realities of growth, disruption and development and discuss how we- as leaders- can grow ourselves and our teams.

Q: What should growth mean to us as leaders?

[Whitney Johnson]: Over 1000 CEOs were interviewed by Egon Zehnder about transforming their organisations. 80% of CEOs strongly agreed that they needed to transform their organisations and themselves (close to 100% agreed, but 80% did so strongly). This may sound obvious but before the pandemic it was only 26% – think about that, before the pandemic, 26% of CEOs thought they needed to transform their organisation but not themselves. To grow your organisation, you need to grow your people. To for your people to be motivated and to be willing to take the risk of growing, you need to grow yourself. I believe that growth is our default setting – there’s a deep hunger we have to make progress.

Q: How do we model growth?

[Whitney Johnson]: The Roger’s diffusion curve describes social change, how groups change, and what that change looks like. I was always curious about applying that ‘s-curve’ to us, as leaders.

My starting point was mapping against the diffusion curve. Growth starts very-slowly initially until you reach a tipping-point (typically 10-15% penetration) following which you move to hyper-growth and 90% percent (saturation) after which growth tapers off. Well, how do you map that for the individual?

Every time you start something new, you’re at the launch point of your growth – growth feels slow – you may feel discouraged, overwhelmed, impatient, frustrated. You may feel a loss of identity because you don’t know who you are anymore or because you can’t do this thing that you don’t know! The experience you have at launch point is normal, and you need to realise that’s how you are supposed to feel! Also… you can get into trouble if you try to rush through the launch-point and don’t use that time to explore, to gain experience.

Next, you accelerate. You put in the effort, and you hit the knee of the curve. This is the time where growth is (and feels) fast. Your brain makes lots of predictions that are increasingly accurate… there’s lots of dopamine… it’s exhilarating and fun.  That’s what the sweet spot of growth looks and feels like and has often been described as flow.

Next, you achieve mastery. This is the place where your mind’s predictive model starts to figure things out. You set out to be great at a particular role? Well, now your model is accurate, and so there’s very little dopamine. You’re at the top of the mountain and your brain is kinda’ bored. Complacency can start to dial-in, and you may need to reconfigure your role to move back into the sweet-spot of growth on that s-curve, or onto a new curve entirely!

To be a peak-performer, you have to understand how to navigate all aspects of the growth cycle.

Q: How do you know what to do at each stage of the growth journey?

[Whitney Johnson]: At the launch-point, there’s an exploratory phase where you ask yourself a number of questions about whether that growth path syncs with your identity, whether it’s familiar enough that you feel you can navigate it, whether it’s novel enough to be worth navigating, and whether you believe you can achieve it. So, you’ve got this checklist of questions that you want to ask yourself, but you also need to start collecting data – the qualitative data of your emotions, but the quantitative data of validation – it’s much like a start-up, where instead of waiting, the best way to validate an idea is to have a customer conversation now, not next week. That feedback is what tells you whether this is (or isn’t) the right s-curve. When you have the data, you then know whether to jump to another curve and grow in a different domain, or whether you build momentum and stay your course.

Part of growth is about believing that we can be more tomorrow than we are today, that’s aspiration. Embedded in that aspiration is a goal. Early in the growth journey, it’s hard, and your dopamine will drop. You need to create lots of ridiculously small goals to build momentum at the launch-point. Let me give you an example. I’m really into Korean dramas, and want to learn a bit of Korean. I literally do five-minutes a day, and have done that for 53 straight days. That starts to aggregate into something where I can now recognise some symbols and words, the momentum is building. By setting small goals you have absolutely no excuse for not meeting them – and you build momentum.

Q:  What is the role of coaching and mentorship in growth?

[Whitney Johnson]: When people ask me what I wish I had when I first started my career, my answer is simple; a coach. A coach is a bonus prefrontal cortex – they help you see your blind spots, your strengths, your weaknesses. They help you change your self-limiting beliefs, and help you build momentum. High performance professionals need coaches as much as high performance athletes!

When you have a coach, you’re paying them to coach you. Mentorship is much less formal, and may only be for a specific point in time where you have a question about a specific challenge or opportunity. There is less responsibility on the part of the mentor, and it’s much more about you. Coaching is an entrusted relationship over a period of time which is a very different relationship.

Q: What’s the role of resilience in growth?

[Whitney Johnson]: For all its sadness, the pandemic has given us gifts. One gift is that many of us have realised that we’re very-much at the launch point of the s-curve when it comes to emotional regulation, understanding and managing the feelings we have – and resting. Therapist Emma McAdam notes that you don’t want to feel better, you want to get better at feeling. Understanding your emotions and feelings helps you make sense of them as you grow.

[Whitney Johnson]: Researchers have done fMRI studies of brain and asked subjects to imagine their future selves. The same part of the brain lights up as seeing a celebrity. In other words… the future self is not someone we know or recognise, it’s not us! It’s very difficult to think about legacy as it relates to our future self. We have to think of legacy differently – we have to start thinking about our future self often, and early – so we get to know them, and we can set goals, and aspirations and make them feel real to us. Your contribution to this world is the sum of what grows when you are gone. For me, for my legacy, I want people to have a mental model of what growth looks like because they’ll be able to grow and have a more productive, happier life. From a personal standpoint, I want everyone that I interact with including my husband and children (who see the underbelly of my life!) to feel better for having been around me. It’s simple, yet grand, I suppose.

Up Next: How to Build a Board