Why Are Wars Becoming Endless? 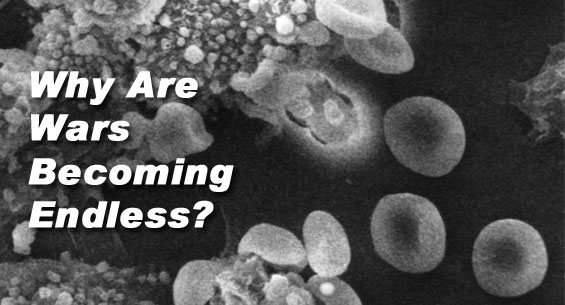 The nature of the global conflict is changing. Until the apocalyptic end of World War II, we had seen a ‘textbook’ approach to war, with ever-increasing competition in the dimensions of firepower, manpower and speed contributing to the success of any given belligerent.

Another characteristic of this form of war is the blurring of begging, and no-apparent-end meaning perpetual conflicts with waxing and waning levels of ferocity (such as the conflict between Israel and Palestine).

Why Do Some Wars Become Never-Ending?

To fully understand why wars become perpetual, you need to understand the dynamics of conflict. If you’re wanting to educate yourself on conflict, the history of past wars and how it shapes the future of the world, and possibly affects future wars, you might be interested in looking at an online degree from an institution like Norwich University or one similar.

Paul Hensel (Associate Professor of Political Sciences, University of North Texas) identifies in a paper, “Recent research on interstate conflict and rivalry has shown that most conflict occurs between long-time rival countries, and has used enduring rivalries to test propositions on arms races, deterrence, and power transitions. Yet most of this research has focused on the dynamics of already-established rivalry; little is known about how adversaries become long-term rivals. The present effort attempts to account for the origins of rivalry with an evolutionary model of interstate rivalry that treats rivalry as a dynamic process, evolving out of interactions between two adversaries. Empirical analyses reveal that the context of recent relations between two adversaries has a great influence on their conflict behavior, particularly on their probability of engaging in further conflict along the path toward or away from enduring rivalry. As two adversaries accumulate a longer history of conflict, their rivalry relationship tends to become “locked-in” or entrenched, with future conflict becoming increasingly difficult to avoid; characteristics of their past confrontations can hasten or reverse this movement toward rivalry.”

If we understand these findings against the background of ‘fourth-generation conflict’ we also see that while in ‘classic’ conflict-theatres the adversaries and targets were fairly well defined (such as soldiers, military sites, strategic sites); in modern warfare, not only has the theatre itself become amorphous (arguably global) but the system now contains an unprecedented diversity of actors, many of whom (as non-military) are far more likely to be influenced by history (with family members killed by adversaries, and livelihoods destroyed).

To see this in a different context; “Our body…” cites Erkki Ruoslahti in Scientific American,” is a community of cells, in which each cell occupies a place appropriate for its tasks on behalf of the whole. With the exception of white blood cells, which patrol the body for microbial invaders and tissue damage, normal cells stay in the tissue of which they are part. Cancer cells, however, are rogues that trespass aggressively into other tissues. Metastasis, the spread of cancer to distant sites in the body, is in fact what makes cancer so lethal. A surgeon can remove a primary tumor relatively easily, but cancer that has metastasized usually reaches so many places that cure by surgery alone becomes impossible. For that reason, metastasis and the invasion of normal tissue by cancer cells are the hallmarks of malignancy.”

If we keep this metaphor in mind, we see the general population being akin to a community of cells who, together, form an efficient and productive society. If we consider conflict and conflict-provoking ideologies as Cancer-cells- we can start to see that malignancies caused by Cancer do- indeed- model malignancies in a society which cause and exacerbate conflicts, eventually leading to failure of societies (or death of the cancer sufferer) without treatment.

The foreign policy surgeons (much like their medical counterparts) try to extract malignancies (such as a dictator, or a regime) but if the idea has spread? Then the system may still fail. It does not take a great deal of imagination to apply this paradigm to our current “War on Terror” which creates a continuous stream of geographically diverse conflicts (malignancies) regardless of all the interventions (surgeries) which take place.

How Do We Cure a War?

Cancer and conflict have another commonality. The mechanisms used to spread productive and important ideas through society are the same as those used to create social and political malignancy and as much as “…disappointingly little is as yet understood in molecular detail about the mechanisms that turn cancer from a locally growing tumor into a metastatic killer…” our insight into how an ideology spreads falls on a similar lack of understanding.

For medicine, this lack of understanding led to innovations in treatment routes meaning researchers try to inhibit the production and spread of the cells before they become malignant using things like microcentrifuge tubes (you can find out what microcentrifuge tubes are made from here), and even try to modify the host’s DNA to remove a predisposition to Cancer at the most fundamental level.

Our Foreign Policy architects must understand that these are similar treatment routes to those which must be adopted to begin to cure the alarming increases in global conflict. Alongside the occasional (necessary) interventions, policymakers must also adopt considerably larger programs of economic and social development (including education and healthcare) to not only remove the predisposition of individuals to be influenced by ideologies but to remove the economic and social incentives for actors to turn to war (functioning economies experience considerably less radicalization, for example). As Epictetus said, “Only the educated are free.”

The downside for our generation (as a host of societal malignancy) is a fairly damning prognosis- there are too many embedded and fast-spreading issues for there to be a really lasting and robust peace. The hope for our civilization, though, comes from our ability to prevent the generation after us from facing a similar fate.

“If we are to teach real peace in this world…” as Mahatma Gandhi said, “and if we are to carry on a real war against war, we shall have to begin with the children.

Up Next: Rethinking Crime and Inequality