Close Search ×
Order the Book Subscribe Free
Why Must Some People Beg For Aid?

Why Must Some People Beg For Aid? 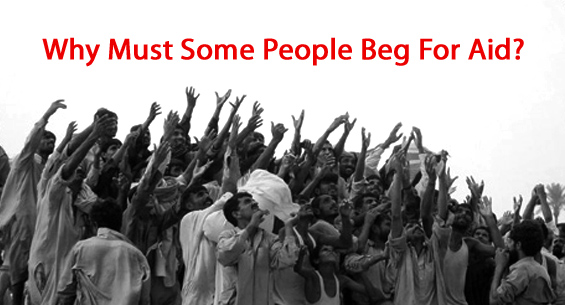 UN Dispatch reported the words of Ban Ki Moon (UN Secretary General), who visited the Pakistan floods, saying, “This has been a heart-wrenching day, and I will never forget the destruction and suffering that I have witnessed.  I have visited the scenes of many natural disasters around the world, but nothing like this. The scale is so large: so many people, in so many places, in so much need… I am also here to send a message to the world: these unprecedented floods demand unprecedented assistance”

The same publication reported the crisis in numbers.  As at August 16th 2010, over 20 million people have been affected by the disaster (affected meaning they now require humanitarian assistance).  Over 2,000 people have been killed, 722,000 homes destroyed (with over 300,000 people evacuated just from Sindh province alone).  Over 6 million people are now without clean water, and over 3.5 million people are at immediate risk of fatal disease.  Over 16% of all cultivatable areas of the country are underwater (some 3.2 million hectares) with the additional hit of over 200,000 livestock being lost (including 100% loss in some areas).  There is little doubt, that this is one of the worst natural and humanitarian disasters of recent times.

One of the biggest questions raised from this crisis has been why the international community has not shown the will to act with the speed and support needed, and which they have shown for other recent disasters (with over $14bn of private donations made to agencies following the boxing day tsunami of 2004, and over $1.1bn raised in a short space of time by charities for the people of Haiti following the 2010 earthquake).  International news agencies even report the people of Pakistan, feeling left with no alternative, have now started to protest for aid– effectively begging the international community to assist them, at a time of dire and immediate need.

Every country has a perceived dilemma between Welfare and Foreign Aid insofar as they have X amount to spend, and have people in need domestically, and the duty to help those in need wherever they may be (international human rights).  The problem is, this is never quite as simple as that.  Aid is wrongly used (as we have seen in many situations around the world ranging from a lack of action in Darfur, to extreme action in Latin America) as a political weapon by governments, and as a weapon to show patriotism by governments and citizens of any given country.  To put this in context of the disaster which has engulfed Pakistan, there are three key reasons from which we can see this disaster-prejudice as having been manifest:

For the overwhelming majority of individuals, the global media outlets are their eyes and ears to learn what happens around the world.  Alongside the ability to report, these agencies also have the ability to influence how we form our opinions, prejudices, and actions.  Over the last twenty five years, as journalism has become more competitive, and ‘sensationalism’ has become a key hook in all outlets- disasters have become competitive.  In a macabre way, a disaster only “counts” if the death toll is huge and immediate (such as with the tsunami and earthquake), and can be equated in terms of entire towns and cities by the viewer.  This is a morally abhorrent attitude to take.  If, as individuals, we agree that life is precious (which I hope we do), we must assume that the loss of even a single human life is a disaster- magnifying this to tens, hundreds or thousands of lives should not be the trigger for us to suddenly feel called to action.  In Pakistan, while the immediate death-toll was ‘small’ relative to other natural disasters- the disease, lack of food, and environmental factors affecting these people will, unless aid is provided, result in hundreds of thousands of deaths- maybe more- over the following few months.

Pakistan suffers an unfortunate image deficit.  A decade of conflict in Iraq and Afghanistan, with constant reporting and mixed messages has resulted in the general public subconsciously assuming that the entire country is run by terrorist leaders or is so corrupt that aid will never get there.   Pakistan, like any emerging market economy (including India, China, Africa) has elements of corruption, and like any country in the world, will always have its share of extremism (the UK, USA, and Europe are not immune).  It is rare, though, that the media must report that, “Pakistan has sought to reassure international donors that funds to help victims of its devastating flooding will not fall into extremists’ hands.  Interior Minister Rehman Malik told the BBC the Taliban would not be allowed to take advantage of the crisis to increase its support.” Any individual with even an elementary understanding of political or economic theory will know that one of the major reasons for the emergence of extremist groups is global economic inequality, and prejudiced distribution of opportunity and aid.

For political originators of international aid- the decisions they make are driven (unfortunately, and inevitably) by political will.  The New York Times recently reported on how, “…the Obama administration continues to add to the aid package for flood-stricken Pakistan — already the largest humanitarian response from any single country — officials acknowledge that they are seeking to use the efforts to burnish the United States’ dismal image there.…  American officials say they are trying to rekindle the same good will generated five years ago when the United States military played a major role in responding to an earthquake in Kashmir in 2005 that killed 75,000 people …But American officials warn that the glow from the earthquake assistance faded quickly without more enduring development programs.“.  As Aidwatch found, this not the first time the US has jilted Pakistan when it needed aid (full research, from the Centre for Global Development can be found here).  Referring to our patriotism versus prejudice debate (above) we see that for the US (and many other developed economies)- overwhelmingly, their engagements in international aid are driven by (predominantly) strategic or political factors.  Strategic being linked to conflict, economic growth, or defence- and political meaning causes or people to whom their population has a sympathy.  We saw similar criticisms of the international community on their failure to intervene quickly in Darfur, and we will no doubt see similar criticisms of the world’s failure to act for the millions of people who, as we sit here today, are either starving, forced to join the military, or held in forced labour camps in North Korea.

The twenty million people who currently need assistance in Pakistan are not terrorists, nor of strategic importance for our governments.  They are much more important than that, they are people like you and me- men, women, families, children- who only want the best for their lives, and who were already struggling with immense poverty, even before nature yielded a blow.  These are individuals with hopes and aspirations like us, who fall in love like us, who mourn their loved ones, just like us- and so a failure to act- is a failure of humanity of such a proportion, that we should all see blood on our hands.

Up Next: A Conversation with Eliot Brown on The Cult of We: WeWork and the Great Start-Up Delusion