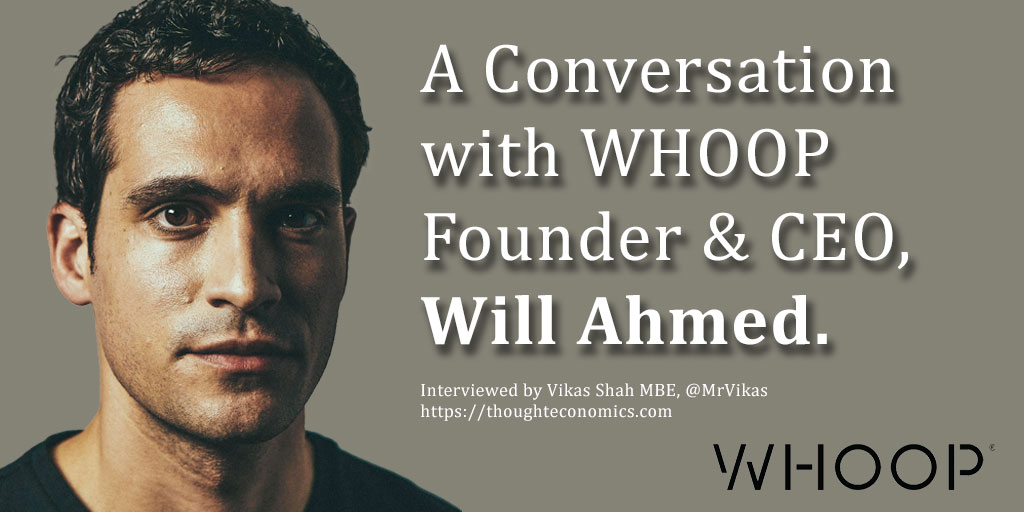 Will Ahmed is the Founder and CEO of WHOOP, which has developed next generation wearable technology for optimizing human performance and health. WHOOP members include professional athletes, Fortune 500 CEOs, fitness enthusiasts, military personnel, frontline workers, and a broad range of people looking to improve their performance. WHOOP has raised more than $400 million from top investors and is valued at $3.6 billion, making it the most valuable standalone wearables company in the world.

Ahmed has recruited an active advisory board that consists of some of the world’s most notable cardiologists, technologists, marketers, and designers. Ahmed was named to the 2021 Sports Business Journal 40 under 40 list as well as 2020 Fortune 40 Under 40 Healthcare list and previously named to Forbes 30 Under 30 and Boston Business Journal’s 40 Under 40. Ahmed founded WHOOP as a student at Harvard, where he captained the Men’s Varsity Squash Team and graduated with an A.B. in government.

In this interview, I speak to WHOOP Founder & CEO, Will Ahmed. We talk about his mission to transform human health, and how he built the world’s most valuable standalone wearables company (valued at over $3.6bn)

Q: How did you develop the concept for WHOOP?

[Will Ahmed]: I grew up as an athlete, and I was into sports and exercise. I was captain fo the Harvard squash team. I felt like I didn’t know what I was doing with my body while training, and that simple question of how I can measure and optimise my body while I was training, took me down this rabbit hole of physiology as a student. I did a lot of research and ended up writing a paper on how to continuously measure the human body. It was based on over 500 medical papers, and then I wrote a business plan around how I thought there could be an opportunity to build technology to measure the human body. That combination of research and a business plan gave me the confidence to start a business when I was 22 years old.

Q: How did you approach your technology stack?

Q: What made WHOOP so attractive to the market?

[Will Ahmed]: WHOOP has always had a strong focus and perspective on what technology should look like when it’s being used properly in the world. This has helped us navigate what’s been a very competitive landscape. The paper I wrote in 2011 was titled the feedback tool; measuring intensity, recovery and sleep. Today, the 3 main things WHOOP measures are strain, recovery, and sleep. Some 10 years later, our core pillars are the same. A lot of things about business have been a zig-and-a-zag, but the notion of what we’re trying to capture and how we talk to our users? That’s been a straight line. That’s been somewhat unusual in the wearables space that have copied each other – and maybe in the process, they have created things the market didn’t need.

Q: How did working with professional athletes impact your development?

[Will Ahmed]: Working with the world’s best athletes forced us to build the most accurate technology, and not to cut any accuracy or performance corners. It takes a really long time, it’s expensive, you have to collect a lot of data, and calibrate your technology with a lot of medical hardware! It’s not surprising to me that so many mass market products skip these steps altogether. Working with professional athletes put us on a train of being really accurate as a health monitor. It also helped identify us, early, as a performance brand – and if you look at health monitoring historically, it’s not been a cool space to be in… it was almost seen that there was ‘something wrong with you’ if you needed to monitor those signals! Pro athletes helped to remove the stigma around health monitoring and make it something aspirational instead. Technology that’s on your body 24/7, it starts to play a role in your identity!

Q: What is the potential of wearable health monitoring?

[Will Ahmed]: The potential of wearable health monitoring is enormous, and under appreciated by a lot of society, because version-1 of wearables were – to put it politely – underwhelming. Look at it this way… the health care industry spends a lot on curative costs… and if you shift the curative to the preventative, you can save a tonne of money and have better outcomes. That’s where continuous monitoring comes in. It can identify things about your body before they go wrong. That could be an illness, a disease or even a heart attack. That’s the future of medicine… being able to see a doctor before something happens, not after… seeing a doctor when you need to, not on some random annual check-up day once a year. Data can create a real story for how the body is evolving and what’s happening right at this very moment.

Our core value proposition is about changing behaviour and improving health. Over time, we want our users to increase sleep, decrease their resting heart rate, decrease their heart rate variability and to introduce lifestyle changes such as reducing alcohol and smoking. Changing behaviours is hard – but it leads to real improvements in health and well-being, and that’s the potential of this space.

Q: What have been some of your own key-learnings from leading a scale-up business

[Will Ahmed]: As a leader, you must evolve with the role. When I was 22, 23, 24, I was learning what it meant to be an entrepreneur and a CEO, it felt like I was spinning out of control. I was very stressed and didn’t have a good way to disconnect my own work, from the performance of the company. If WHOOP had a good day, I had a good day, if WHOOP had a bad day, I had a bad day. If WHOOP was failing, I felt like I was failing. My identity, and that of the company, were one-and-the=same, and that’s not just inaccurate, it’s unhealthy. You don’t’ want to be on the yo-yo of your company’s wins and fails. You can keep doing the right things daily and getting 1% better every day, independently of how the business is performing! Once I was able to separate my identity from the business, it got me really focussed on how I could become a better leader. One of the key things was managing my own stress- when WHOOP was 20 people and we raised $20million, I felt I was really failing as a CEO. Today, the company is 600 people and we’ve raised $400million, and I feel more comfortable now than I did then.

Q: How do you manage your stress and resilience?

[Will Ahmed]: Learning to meditate was a big part of how I managed stress. I do a transcendental meditation every day for about 20 minutes. That has really helped me feel like I’ve got a third person at my side watching over my decisions and has helped me anticipate feelings before I have them. A less experienced, less comfortable, version of myself would get angry and then realise they were angry. The meditative version of me can anticipate when I’m going to get angry- and then, it becomes a choice. Do you want to be angry? Or have a different attitude? It’s been enormously powerful, and I’ve been doing it for 8 years.

I’ve also developed some pretty good sleep habits (partly because I run a company that measures sleep, and partly because I’ve spent a lot of time researching how to optimise sleep). Essentially, the secret is that you want to make sure a high percentage of your sleep is REM and slow-wave sleep. Ideally you spend about 50% of your sleeping time in these states. The only way to know if you are in these different sleep sates is through measurement. REM sleep is when your mind is repairing itself, so it’s like a deep dream state. Slow wave sleep is where you produce 95% of your human growth hormone. It’s really critical these two sleep periods are maximised.

Meditating, exercising, healthy relationships, gratitude… all these things make you a better leader.

[Vikas: What are your views on modern narratives around work-life balance?]

[Will Ahmed]: I’m not saying that we should take-on less stress… the problem with the narratives around hustle-culture is that these narratives operate on one paradigm… you should either be working really hard, nor not working too hard.. that’s a really primitive conversation. To be successful, you have to overcome a level of stress that would break most people. So, I firmly believe you have to be able to take on a lot of stress. Taking on a lot of stress doesn’t mean just putting yourself in stressful situations, it means you’re learning how to manage stress. Building a company is not a sprint, it’s a marathon… if you look at the world’s best marathon runners, they’re running in 4 minute miles. How many people can run a mile in 4 minutes? Not many. You have to learn how to take on an incredible amount of stress, and sustain it for a really long time. That’s optimal, exceptional performance right. High output delivered consistently. That’s what hustle-culture misses…. How can you put yourself in a position to take on a lot of stress, day after day, but also function as a human.

Q: Is entrepreneurship for everyone?

[Will Ahmed]: Entrepreneurship is not for everybody, and it’s also worth noting that you’re not entitled to be a great entrepreneur. You’re not entitled to be successful if you start a company, in fact the most likely outcome is that you won’t be. Sometimes I meet founders and entrepreneurs who complain about how hoard their fundraising or engineering challenges are… they’re complaining about how hard it is to sell product or service. Guess what… yes…. It’s really f***ing hard. That’s the truth. It’s hard, but amazingly it is also possible. You can create something from scratch, an amazing product or service, and in today’s world, that idea can scale to millions of people. That’s an amazing phenomenon!

[Will Ahmed]:  I don’t think all that much about legacy – when you start thinking about legacy it implies, you’re towards the end of a chapter or towards the end of a career, and I feel like I’m just getting started.  I think if I were to look at it through the lens of work that I’d done to date, I’d like to be able to say that I’ve helped unlock massive health and potential for people around the world.

Up Next: A Conversation with Col. Terry Virts (ret), NASA Astronaut & Former Commander of the International Space Station (ISS)