A Conversation with Wim Hof, ‘The Iceman’ 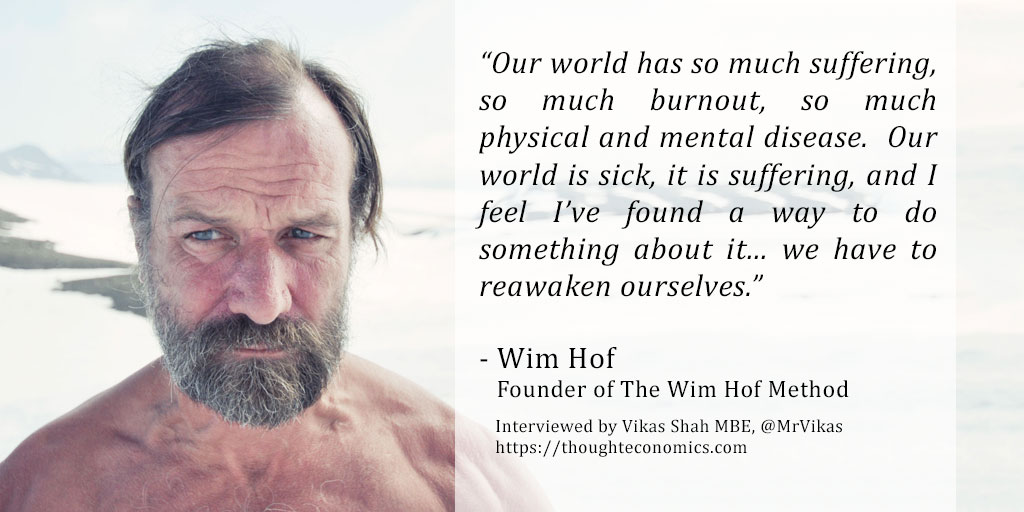 An average human being, in icy water, would be unconscious within 15 minutes and would be unlikely to survive past 45.  Wim Hof, stood in a container while covered in ice cubes for 112 minutes, and survived.

Wim Hof is the creator of the Wim Hof Method. Through more than thirty years of training in nature, he has developed a method that combines specific breathing techniques, cold exposure and mindset. This method has been the first to scientifically prove the ability to actively influence the innate immune system and autonomic nervous system.

Wim holds 26 world records, and has numerous other feats under his belt. He ran a marathon under the Polar Circle in nothing but shorts, holds the world record for sitting in ice —at almost two hours— and has climbed Mt. Everest to the Death Zone point, also in shorts

Wim has consistently believed that he is not unique, and that each and every one of us is capable of controlling our bodies to the same degree that he can.  I caught up with Wim to learn more about why we should embrace the cold.

Q: Why should we embrace the cold?

[Wim Hof]: We come from mammals, we are mammals… we’re just mammals that wear clothes. We’re destimulated – we don’t feel the cold, the heat, everything in our environment – even though our physiology is built for it.   We have heaters on when it’s cold, coolers when it’s hot, and we live in this awful middle-ground – destimulated.  Our vascular system responds naturally to temperature changes by dilating and contracting our muscles; but we’ve allowed them to lose this fitness, to lose their conditioning – and so our hearts compensate.

Within each of us is a deep, complex network of capillaries, veins and arteries which extend a distance equivalent to more than 3 times the circumference of the Earth, and because our body has lost its conditioning to nature, our hearts have to pump 20-30 times a minute more than if we regularly exposed our body to cold water.

Cold water trains our muscular network throughout the vascular system; and by training this system well, our heart has to reduce its compensation, and so we don’t have as much glucose, adrenaline and cortisol being awaken through our body- priming us for fight and flight.  Today – we’re in a near constant state of fight or flight, which is dangerous.

I always say, a cold shower a day keeps the doctor away – a cold shower stimulates blood flow, and helps to optimize and condition all those little muscles and veins with the oxygen, nutrients and minerals they’re starved of.

If we all started taking cold showers; we’d find our stress levels reduce, our blood flow improves, and we would start to positively make a change reducing the number one killer in Western countries – cardiovascular related disease.

We can take hot or warm showers at our convenience; it’s nice, who doesn’t like it – but a cold shower is like a gift, it invigorates the system – it’s vascular fitness.  We can ease ourselves into it and find that in 10 days our system is significantly more optimized.

Q: Where did you find a fascination with the cold?

[Wim Hof]:  I only became aware of this later in life, but I was subject to a trauma at birth.  I was one of twin brothers, but I was born almost too late, at a time where doctors didn’t have the devices to see there was another baby- there was no echo of me to hear.  I was so deep inside, that when the first baby was born- they never suspected another child to be there.

They brought my mother back to the theatre, rushed her into the operating room for a C-section and she was afraid.  She was praying whilst being dragged into theatre, ‘oh god, please let this child live, I will make them a missionary’ – I was born, but I was nothing.  I nearly suffocated and was born into the cold of the hallway.  I believe this left an imprint on me; I was always different.

At 12, I was already reading into Hinduism and Buddhism.  I was learning about meditation, yoga, and any philosophy I could get my hands on.  You have to drive colour into your life – and find those things that deepen you.

I was 17 when I first went into the cold water; and I was met with that deep psychic imprint of the trauma of my birth.  It was not until then that I talked to my mother about what happened when I was born, and suddenly it all made sense.  I began to do all these practices in the cold, challenging my body to explore more depth and further my ability.

For 25 years, I was doing this on my own and then a newspaper came across me and published my story, then the television came and started challenging me, and then scientists came to study how I was able to do things that seemed outside what was possible.  How was I staying in ice for 80 minutes and maintaining my core at 37c whilst my skin was almost at 0c.    The scientists took my blood through the challenged and back in the lab exposed it to toxins like E.coli (which normally create a violent reaction from the immune system) – my blood barely reacted – It was suppressing the inflammation completely; and because we’re all so similar, it makes sense that with the right training, anyone could do it.

After completing a number of comparative studies, I realised that this could have a huge impact for mankind; and that this was my mission.

As soon as I learned my mission, I wanted to call my mother, but received a phone call that she had died.  At the time of my birth, she invoked that message, ‘please god, let this child live, I will make them my missionary…’ and when it was done, when I found my mission, her purpose was fulfilled.

I’m a school drop-out that is now teaching professors and doctors around the world; all because of a naïve woman’s wish for her child to live.

Q:  How important are willpower and breathing control?

[Wim Hof]:  The last study I participated in was “Brain over body”–A study on the wilful regulation of autonomic function during cold exposure, which was published in NeuroImage.   It showed that with thoughts alone, with willpower, not even using breathing exercises- that I was able to raise, lower and regulate my body temperature, even with exposure to significant cold, and with variations of temperature.

When they looked into my brain, they saw I was activating the PAG, the periaqueductual gray, one of the deepest parts of the brain which can normally not be influenced or tapped into even by seasoned practitioners of mindfulness and meditations.

By consciously and regularly going into the cold- I’ve learned how to tap into this primordial part of the brain; an area we’ve lost access to because of our destimulative behaviour.  We need to get out into the cold, into the heat, and allow our brain to reconnect to these lost areas which simply are not activated or developed in our daily lives.

Tapping into these forgotten parts of the brain can be transformational for bipolar, for anxiety, fear, depression, PTSD and trauma.  This is the part of the brain that is normally stimulated by opioids and cannabinoids; but imagine being able to consciously activate this part of your brain- to create euphoria whenever you need.

This is real science, published and peer-reviewed.

We also found compelling evidence of key autonomous processes in the brain related to mood regulation and how I’ve been able to control these at a much higher level than most; all simply because of exposing myself to deep stimulation.

Meditation is a key; it helps you unlock the deeper parts of the brain, the mid-brain, limbic system and brain stem.  The aim for any seasoned practitioner of mindfulness is to bring more blood flow to the brain; and that is exactly what happens when you meditate for just 7 or 8 minutes.  Meditation can help you consciously activate deeper parts of your brain that are connected with a sense of absolute wellbeing and power.  It can even impact your ability to control your hormone system if done effectively.

If you read the Yogasutras of Patanjali, he tells of silencing the brain; accessing what is known as the Seer, the soul.  This is a sense of deep relaxation, of connection, of timelessness.  It is a sensation where you are out of distress and into the depth of existence.

In Yoga, they talk of pranayama; the fourth limb of the eight-fold path of Patanjali’s Ashtanga Yoga.  The Eighth is breath – once you control that, you can go within (into Pratyahara), then you have Dharana (concentration), Dhyana (contemplation) and Samadhi (the union).  This is the path to gaining full enlightenment in a conscious way.

Let us not talk of meditation in the way of silence but rather of controlling blood flow, and of neurological conditioning.  We have a way to do it, and it works.

Q:  Do you think you will ever reach the limit of what the body and mind capable of?

[Wim Hof]:  For me, I do not see a need to push further.  I could have gone further, but I want to bring something to the world that makes people stronger, happier, and healthier- that’s it.

Our world has so much suffering, so much burnout, so much physical and mental disease.  Our world is sick, it is suffering, and I feel I’ve found a way to do something about it.

My drive is to show people the truth of what we’re capable of in a non-dogmatic way through science and not speculation.  We have the capability built into us to control the deepest parts of our brain, and our very DNA and physiology.

I want every mother in the world, from Baghdad to New York to be able to guarantee the same strength and health to her child; to give that child the tools to control their happiness and health, and to have the power to live well.

Our culture is one of compensation, it’s bullshit.  We have so many cars, so many houses and so much sex, we lose track of who we are.  We need to get back to the core.

Through removing stimulation, we’ve disconnected ourselves from nature, from our innate capacities, and we have to reawaken ourselves.

Who wants to be unhappy?  Nobody.  If we know how to be happy, then we become not only happy but we become very lovable beings.  We don’t fight each other, we have no tension inside, we don’t do wrong things outside.  And it’s all there. It’s simple.

Up Next: How Participatory Culture and Mass Collaboration are Shaping our World.