A Conversation with will.i.am 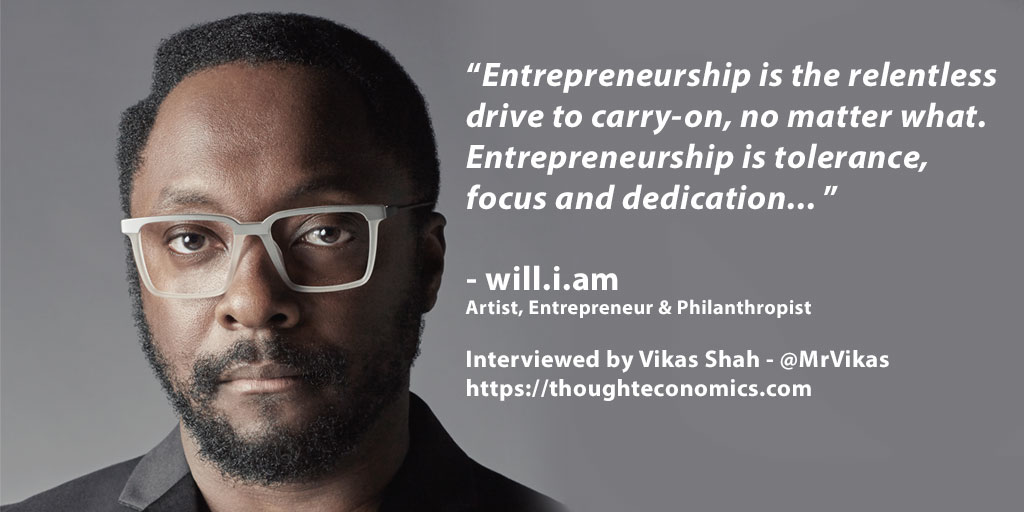 A Conversation with will.i.am
Global Music Artist, Entrepreneur and Philanthropist

“Entrepreneurship is about taking risks, pushing boundaries, and not being afraid to fail,” Sir Richard Branson told me, adding that it’s “a combination of passion, vision, creativity and a sense of adventure,” that drives entrepreneurs to do what they do.

Over the years, I have been fortunate to meet many of the greatest entrepreneurs in the world and one shared-characteristic of practically all of them is their ability to turn their focus, attention and expertise to an impossibly diverse range of industries and challenges.

will.i.am, a multi-faceted entertainer and creative innovator, is a seven-time Grammy Award winner.  Known for his work with The Black Eyed Peas, who have sold 35+ million albums and 132+ million singles worldwide, he also works in the role of producer with some of the industry’s biggest names including Michael Jackson, Rihanna, Usher, Nicki Minaj, Britney Spears, Miley Cyrus, Sergio Mendes, David Guetta and film composer Hans Zimmer.

Alongside his astounding career in music, will.i.am is a founding equity stakeholder in Beats Electronics (purchased by Apple in 2014 for over $3 billion), the creators of Beats by Dre™ headphones and is the Founder & Chief Executive Officer of i.am+.  His other ventures include ill.i Optics and  EKOCYCLE (in collaboration with The Coca-Cola company).  If this wasn’t enough; will.i.am is an accomplished fine-artist, speaker and deeply engaged in philanthropy.

The word ‘entrepreneur’ itself finds its origins in the combination of the Latin words ‘entre’ (to swim out) and ‘prendes’ (to grasp).  Having reached out and grasped so many different ventures, it’s clear that will.i.am is one of our world’s true renaissance men, so I caught up with him to understand more about the man himself.

For me, entrepreneurship is about the people that I surround myself.

At iam plus, the company I founded, we have offices in Los Angeles, Tel Aviv, Bangalore (India), Singapore and now Shenzhen (China).  There’s around 150 of us, and we’re growing.  We’re a cross-disciplinary think-tank company and have everything from AI developers, OS developers, hardware developers and content-makers.

That keeps me on my toes, keeps me thinking- and I can help to edit, fine tune and work on getting those things we work on to be adopted.

[Will.I.Am] ‘Brand,’ is what journalists and industry-people say… we say culture movement.  As artists we say culture! Movement! And analysts say brand.  I don’t know what a brand is, but I know what a freakin’ movement is….

Now, I’m not in any-way comparing myself to him… but if you want to know what a culture-movement is, remember that Dr. Martin Luther King didn’t stand up and say, ‘here’s our brand!’ – he created a movement.

Q: What did you learn about success from music?

[Will.I.Am] One of main things you learn in music about sustaining your career is that you have to stay on the road, stay travelling and stay meeting people.  You have to build personal relationships with radio-staff, journalists and all the people who can help you break a song, tell a story or who can give you the connections you need to succeed.

Music is about creating connections with the audience, you give them something to escape to, something approachable, and something to relate to.  What I’ve learned about tech is that it’s cold and robotic; you don’t know any of the people who make the stuff you live on.

We want to borrow for music, and staying ‘gone,’ and travelling has been important to us- it’s the reason we have offices around the world to get different perspectives.  We’re like labs, skunk-works, where we get people to work on awesome technology because it’s awesome and then we turn those awesome technologies into awesome things.

Q: How do you approach your philanthropy?

[Will.I.Am] In Boyle Heights, where I’m from, there’s a programme called iam College Track.  That came together because of travelling, meeting Laurene Jobs, learning about her college track… meeting Jack Dangermond, Dean Kamen, learning about their programmes and then approaching Lorraine and asking her if I could couple her existing programme with other things to differentiate it in the Bay Area.  We use her college track as a ‘spine’ and surround it with project-based learning so that when kids graduate college, they don’t just have a degree with debt and no jobs.   We give them a computer science skill-set, robotics skill-set, GIS and map-building skill-set.  They go to China every year so they get the travel bug and learn about building relationships and see life.  We’ve been doing that for about 5 or 6 years, and had our first graduating class this year.  Almost 70% of our kids have graduated and have computer science and robotics degrees, but 100% of our kids have graduated and gone on to college.

Q: What drives you?

Music… What always frustrated the hell out of the Black Eyed Peas about me was that we would be at the Super bowl, or would have just finished a 3-night stadium tour, playing 80,000 seats or 120,000 people, and I would say, ‘right guys, what’s next?’ and everybody would be like, ‘ahh, c’mon man, why not just relax?’ but I’d be like, ‘c’mon, we could do this, we could do that!’  My mind just never stopped thinking about what we could be doing next.

Philanthropy… We have college track, a robotics programme, a computer science programme, and I keep thinking about what next? What else can we put in to take this forward? I’m always searching for what we can do next to build.

Entrepreneurship… I’m always in meetings going, ‘hey, we can do this! or we can do that!’ or ‘we need to get to meet this person,’ or ‘let’s go hunt down that person, or that company.’ There is a tenacity, an energy to how I approach it.  I want to hurry-up and complete ‘this’ so we can move onto the next thing we should be working on!  Even when we get to market, I’m always thinking of how we can get to market in a big way, what partners do we need? What partners are we missing? Or do we even need partners? I’m like, ‘let’s go to Israel and find AI people, let’s go to the Philippines and find developers.’

Television… I didn’t even think I wanted to do TV.  I got a call from the BBC who were like, ‘you’d be great on television…’ I did TV for 4 years through the BBC and then decided I wanted to develop my own shows.  I pitched a show to a couple of networks and didn’t get any traction, that happens… your first time at something you’ll get slammed… that hurt.   I’m a big fan of Apple, I love Apple.  In the world of music, Apple would be Michael Jackson.  I did music, never thought I would work with Michael Jackson; but he’s my hero, my inspiration, and the same applies to Apple.  I found out about Apple TV, and decided to pitch them an idea instead of going to traditional networks.  The first piece of content they’re commissioning on Apple TV is my show ‘Planet of the Apps.’

You have to keep reaching, keep thinking about what the next-level is.

Q: What would be your advice to the next generation of entrepreneurs?

[Will.I.Am]  Iovine was the funder and the bringer-together and sometimes the glue.  He was never afraid to say, ‘hey, I’m not the idea guy… that’s why I have these other guys.’  I was Jimmy’s ideas-guy.

You have to be open-minded, and be a people-person.  If you’re a recluse? Go build a social-network or something… Recluses often build or create what they’re lacking.

You have to know who you are, be open-minded, and be ready to collaborate.

You have to have thick-skin and be prepared to get your idea ripped apart.

You have to be patient, and you know what? You gotta’ like bullsh**  A lot of the time, the reason your stuff ain’t working is because bullsh** happened.  A lot of people give-up because of the politics and turn into frickin’ wusses.

If you want to be successful? You have to take bullsh** and turn it into fertiliser.