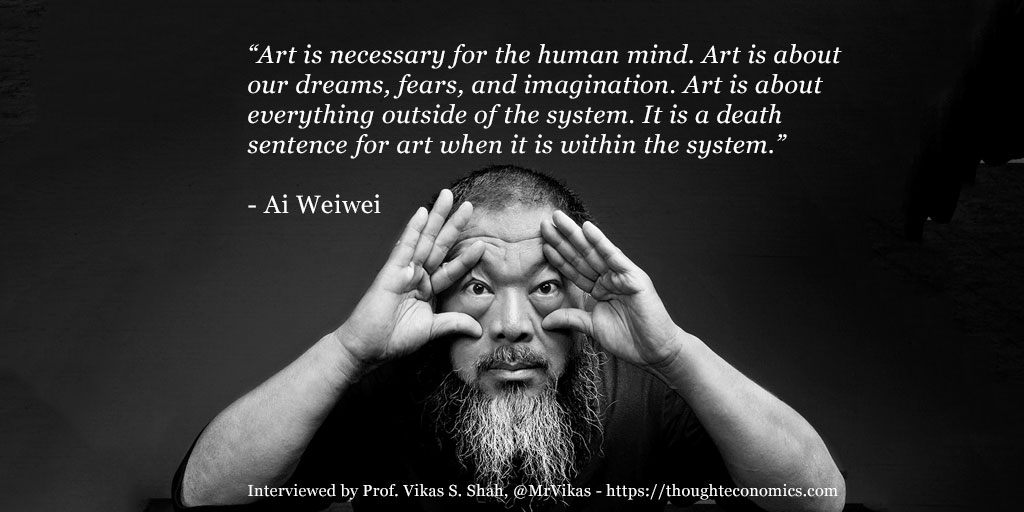 The philosopher Richard Kearney surmised that “…politics is far too grave a matter for the politician and art is far too potent a medium for the artist.  Beyond this entrenchment is a place where the two can meet.”  For art though, this middle ground can seem uncomfortable, and a Kearney summarised, “…to suggest that art become political is not to suggest that it become politics. To do so would be to suggest that art abandon its essential role as life in suspense, behind and below and other than itself.” (The Crane Bag, Vol. 1, No. 1, Art and Politics (Spring, 1977), pp. 8-16)

This may seem a paradoxical place for art to be, but in June 2017 I was confronted with the truth of this statement.  At the Kunsthal Charlottenborg, Copenhagen 6,000 refugee life jackets (collected from refugees in Lesbos) barricaded the building’s massive façade windows, jarring the pleasantries of one of the city’s busiest tourist streets.  This work, ‘Soleil Levant’ (Rising Sun) by Ai Weiwei was exactly as Kearney described, it was life in suspense; making you confront the gravity and scale of our world’s refugee crisis in a way that travelled through your cognitive dissonances, to a point in your mind where you simply understood.

Ai Weiwei is an artist, renowned for making strong aesthetic statements that resonate with timely phenomena across today’s geopolitical world.  I spoke to him to learn more about his art.

Q: Where does your art come from?

[Ai Weiwei] I grew up under Chairman Mao’s rule during the Cultural Revolution. This was a repressive communist society completely lacking resources. My father, Ai Qing, was a poet. Alongside other intellectuals of his generation, he was persecuted by the Communist Party. My father was accused of being a rightist during the “Anti-Rightist Movement” and exiled to a labor camp in northwest China. I grew up in the camp and watched as he was forced to clean public toilets. He was also prohibited from writing for twenty years.

After Mao’s death in 1976, my father was rehabilitated and our family was allowed to return to Beijing. I attended film school and participated in the first democratic movements. I left for the United States in 1981 and settled in New York in 1983. I briefly attended art school, held odd jobs, gambled, and lived an independent life—I was free. It was in New York that I was first exposed to capitalism—this constant search for profit and material security at the expense of individualism and humanity. I could never feel comfortable under those conditions.

After twelve years in the United States, I returned to Beijing. By this time, China was still an authoritarian society but one that had adopted state capitalism. During this period of rapid industrialization, China existed in a paradoxical state of authoritarian rule—with extreme restrictions placed on ideology and free expression—and anarchy in every other facet of life.

In 2005, I was introduced to the internet. Sina, a web portal in China, invited me to begin blogging on their platform. Through my blog, I was able to reach an audience of millions. After the 2008 Sichuan earthquake, I initiated a Citizens’ Investigation into the student deaths. I openly published our research—every student’s name, their birthdays, their parent’s names, the schools they attended—on my blog. On June 1, 2009, the Chinese authorities shut down my blog.

Those experiences made me. I am a product of my time. Without the internet and globalization, Ai Weiwei, as you know him, would not possible. My art comes from those influences and the persistent struggle to understand our time.

Q: How do governments use art to further their own agenda?

[Ai Weiwei] The extremist governments of the past—the Third Reich, the Stalin regime, Chairman Mao’s party—were all well aware of the power of art. They viewed art as equal in importance to their military and police control. Chairman Mao used to say that the communists had two important armies—one wielding the barrel of the gun and the other wielding the barrel of the pen. Power is seized with the gun and maintained with the pen. Controlling public opinion through propaganda and misinformation is the most critical task of an authoritarian power.

Propaganda still exists and persists throughout the world, even in the “civilized” West. The only difference today is propaganda is not only propagated by the state but also by forces of capitalism.

Capitalism influences our lifestyle, shapes public opinion, and impacts education. It alters our sense of right and wrong and warps our understanding of justice and fairness. The modern media—inextricably tied to capital—actively manipulates the public. The most vivid character of our time has been the enslavement of society to this profiteering system.

Q: How can art fight back against tyranny, oppression and political systems?

[Ai Weiwei] The strongest characteristic of art is that it belongs to the individual. Art is an expression of individualism and the opposite of oppressive dogma.

Q: What is the role of art in peacebuilding and reconciliation?

[Ai Weiwei] Art is necessary for the human mind. Art is about our dreams, fears, and imagination. Art is about everything outside of the system. It is a death sentence for art when it is within the system.

Q: How can the abstract convey the literal in the mind of the viewer?

[Ai Weiwei] Artists must trust that they can relate with essential human needs, like the breathing of air and the thirst for water. Whatever is produced should share those essential elements of life. In that sense, you have a trust and a common language to express yourself and to communicate with others.

Q: Are you hopeful for our future?

[Ai Weiwei] I’m grateful to be alive during this time. I can’t think of a better time than this very moment. If you take a longer view of history, everything progresses naturally. What is happening today is a failure of liberalism, which has lost touch with reality. Nothing is guaranteed. Freedom without struggle is an illusion.

I love problems. How we deal with problems defines who we are and what values we stand for.

Ai Weiwei is renowned for making strong aesthetic statements that resonate with timely phenomena across today’s geopolitical world. From architecture to installations, social media to documentaries, Ai uses a wide range of mediums as expressions of new ways for his audiences to examine society and its values. Recent exhibitions include: Maybe, Maybe Not at the Israel Museum in Jerusalem, Law of the Journey at the National Gallery in Prague, Ai Weiwei. Libero at Palazzo Strozzi in Florence, #SafePassage at Foam in Amsterdam, translocation – transformation at 21er Haus in Vienna, Ai Weiwei at the Royal Academy of Arts in London, and @Large: Ai Weiwei on Alcatraz in San Francisco.

Ai was born in Beijing in 1957 and currently resides and works in both Beijing and Berlin. Ai is the current Einstein Visiting Professor at the Berlin University of the Arts (UdK), and he is the recipient of the 2015 Ambassador of Conscience Award from Amnesty International and the 2012 Václav Havel Prize for Creative Dissent from the Human Rights Foundation.

Up Next: Is it Time to Rethink Sovereign Debt?