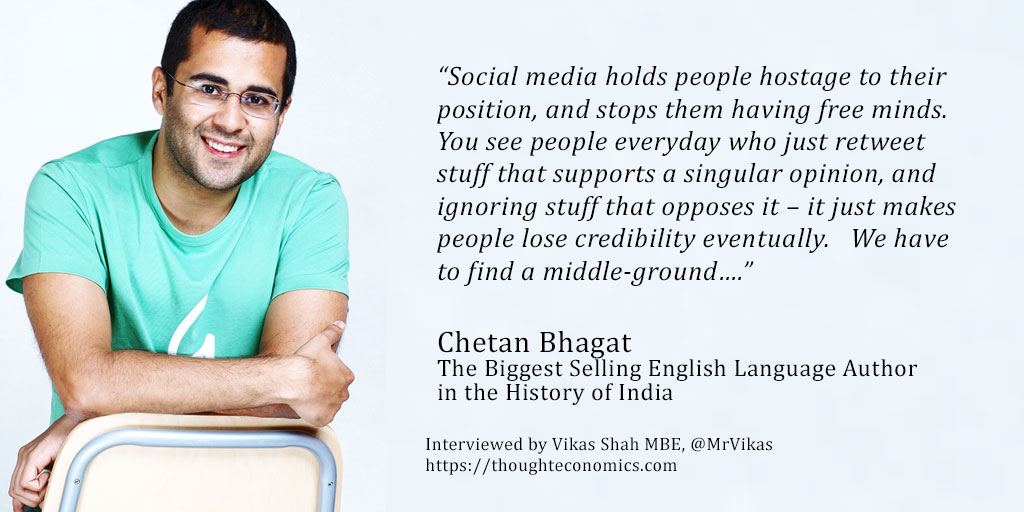 Tariq Trotter, best known as ‘Black Thought’ once said to me, “…art has always played a role in revolution, evolution and change.  Art has always been a great changing force, the great common denominator, and a force to help people understand the world we live in, and the people within that world.” (Interviewed in Thought Economics, 2017).

Across the world, countries are going through extraordinary periods of social change, with hundreds (if not thousands) of years of norms being upended by the momentum of global cultural liberalism, and the possibilities opened up by digital communications.  For many nations, the pace of change is opening up the wounds of unresolved or previously undiscussed issues; from attitudes to gender and sexuality to individualism, relationships, family structures and careers.

I caught up with Chetan to learn more about his view of today’s India, and how writing has been a keystone of social change in a country that houses one-sixth of the world’s population.

Q:  What does India mean to you?

[Chetan Bhagat]:  India forms a huge part of my identity – I’m one of the few people who got the opportunity to do really well in life, and whatever I am today is because of India.

On a personal level, India gave me the best colleges to attend – with worldwide recognition – and because of this, I could get a job in the real world, in investment banking.  In the second phase of my life, India gave me recognition as a writer, and a lot of popularity in a different career.  For me, this wouldn’t have happened if I wasn’t Indian.  I couldn’t have had those colleges, or I couldn’t have had the reach as an author that I do if I wasn’t born in India.

At a broader level, India is one sixth of the world’s population – and a population who are trying to come-up in life.  It’s happenstance that in 1947, certain political boundaries were drawn – that wasn’t the decision of the people, but rather people making decisions.   Just think,… 1/6th of humanity that still has a standard of living a lot below the developed world, so they’re just trying to get better and just be better people and have more money to progress….

Q:  What is the difference between India as you see it, versus the India projected in media internationally?

[Chetan Bhagat]:  People who talk about India typically come from a certain background, or have a certain view of things… they have also capitalised on what sells about India… and that reinforces the outside image… after a while, it doesn’t really matter what India actually is!  India in the mind of the ‘The West’ feeds into the biases that are projected of India, and that’s based on what people think will go viral.  A snake charmer? That will go viral…. A software programmer? Not so much….

My work depends on knowing real India, not the ‘exotic’ stereotype.

Q: What is the power of religion and materiality in today’s India?

[Chetan Bhagat]:  Indians are very religious people, and very family-oriented.  I would also say that Indian culture is very emotionally driven, with less of a focus on individualism.  The political boundaries of India were only drawn 70 years ago, but our religions have been with us for thousands.  We have new political movements on the rise, but it will take a long time for new culture to displace thousands of years of embedded heritage.

People obviously desire material objects, things and have aspirations for a better life or a better quality of life – but that’s everywhere, not just India.

Q:  How is culture changing in India?

[Chetan Bhagat]:  The internet has been a game-changer for culture in India.  Whether you look at consumerism, liberal lives & values, fashion trends, changes in sexual attitudes….. I don’t think it’s a Western versus Eastern culture issue, but one of emotive society (which is naturally how human beings are).

Human beings are naturally liberal about these things, human beings are naturally in pursuit of wealth and in pursuit of love and in pursuit of pleasure.  I think that happens more in the West or in developed places because it’s more accepted there.  India is technically a free society because of our structure as a democracy – but there have been a lot of taboos that have come with religion, and those taboos are getting questioned and going away… yet I think the stage we are at is one where people are not openly acknowledging their desires, and are keeping a certain façade of Indian culture that ‘we don’t do these things’, but a lot of those things are happening beneath the covers.

India is conservative on the outside, but becoming more liberal inside.  A lot of my stories are about the double life that younger India has to lead…. The conflict between conservatism and liberal values…. That is the story that so many of our people face, and what they connect with in my writing.

Media and literature are playing a huge role in cultural change too.  I remember when I wrote my first book and people said, ‘I really like your book, but it would have been great if you didn’t show her having premarital sex….’ Fifteen years later? Nobody says that.  In fact, in one of my books I have an Indian girl who has a lot more sexual agency, she is more forthright and confident demanding what the guy does, ‘yeah… you may be satisfied but I’m not…’ – fifteen years ago, those narratives would have been unthinkable…. there’s a lot more acceptance, not just in my stories but in movies also, of a female lead for example, who is maybe engaging in pre-marital sex and she’s still lovable, and likeable.  It wasn’t there before.  You had to be pristine to be likeable.

Q: What worries you about contemporary India?

[Chetan Bhagat]:  As we speak today, we’re in the middle of an election and the political battle-lines are drawn, and politicians don’t mind exploiting them.  In reality, India is not as divided as you might think… hundreds of millions of Muslims live and work in India, they are friends with people in and out of their community, and just live normal lives like anyone else…. When magazines put covers like, ‘Divider in Chief’ (describing Narendra Modi) it’s really unhelpful.

We naturally will tend to read media or engage with dialogue that affirms our hypotheses, rather than looking at the truth.  India has always been a multicultural place, and because of social media – certain divisive tendencies are getting exaggerated… this is happening in the UK and USA too.

If we look at the United States, a country that I admire for its creativity, its business orientation and innovation… a country that has led the way in political correctness and liberal values… but a country that can still elect Trump.

Q:  How did you find a voice for change in your writing?

[Chetan Bhagat]:  Becoming a fiction writer happened almost as a happy coincidence, and India has given me a lot- it’s been very good to me.   I felt that with my education, understanding and perspectives, there was a lot more I could do than write love stories.

I dipped a toe in the water and found a lot of people were continuing to read my opinions and analyses as well as my stories and I felt that there was a disconnect in India between people who express themselves in their local language versus English, creating an elitist bubble.  I realised that people like me are part of a small group who could bridge that gap.

I believe that I should do things which are good for my country… and that’s difficult sometimes, it’s much easier to get a fan following if you have a right-wing or left-wing narrative….

[Chetan Bhagat]:  On twitter and social media, if you take a position it’s there forever.  It’s difficult for people to say, ‘hey, you know what? …. I see things differently now, I think I’ve changed my mind…’ – once you say Trump is bad, you have to keep saying it… and the same if you think he’s good.

Social media holds people hostage to their position, and stops them having free minds.  You see people everyday who just retweet stuff that supports a singular opinion, and ignoring stuff that opposes it – it just makes people lose credibility eventually.   We have to find a middle-ground….

Q:  How did you decide to become a writer?

[Chetan Bhagat]: Writing was a hobby, I never thought it would be my career.  When I first started, many publishers and people rejected my books… so I didn’t even think they were that good!  I also struggled to find people who had been able to make it their full-time living… it genuinely never felt like it would be my life.

I’m very lucky and sometimes, when I walk into a bookstore and see 30,000 different books? I feel a lot of gratitude that people choose mine.

Four out his five novels have been already adapted into successful Bollywood films and the others are in process of being adapted as well. The New York Times called him the ‘the biggest selling English language novelist in India’s history’. Time magazine named him amongst the ‘100 most influential people in the world’ and Fast Company, USA, listed him as one of the world’s ‘100 most creative people in business’.

Chetan writes columns for leading English and Hindi newspapers, focusing on youth and national development issues. He is also a motivational speaker and screenplay writer. Chetan quit his international investment banking career in 2009 to devote his entire time to writing and make change happen in the country. He lives in Mumbai with his wife, Anusha, an ex-classmate from IIM-A, and his twin boys, Shyam and Ishaan.

Up Next: Can Prizes Change the World?