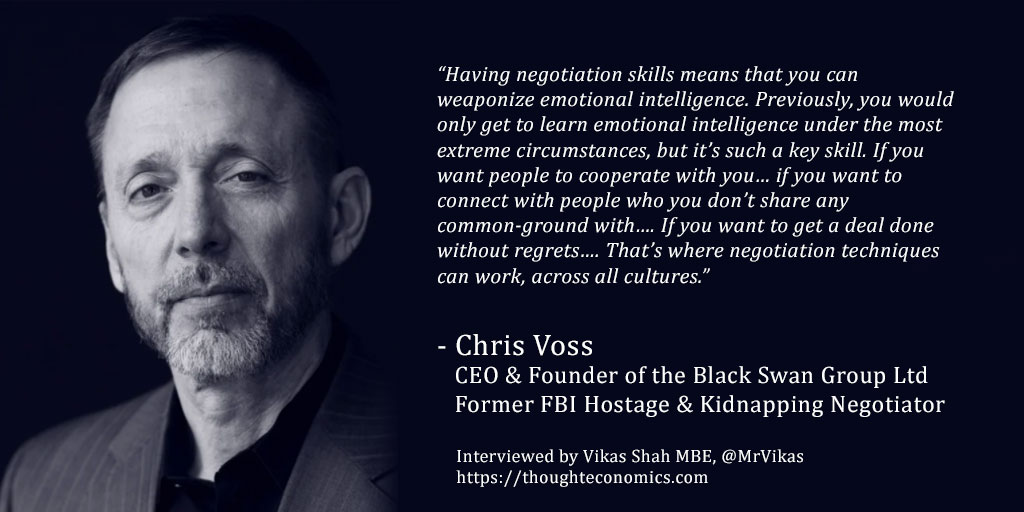 Chris Voss is the CEO & Founder of the Black Swan Group and Author of Never Split the Difference: Negotiating as If Your Life Depended on It.

Prior to 2008, Chris was the lead international kidnapping negotiator for the Federal Bureau of Investigation, as well as the FBI’s hostage negotiation representative for the National Security Council’s Hostage Working Group. During his government career, he also represented the U.S. Government at two international conferences sponsored by the G-8 as an expert in kidnapping. Prior to becoming the FBI lead international kidnapping negotiator, Christopher served as the lead Crisis Negotiator for the New York City Division of the FBI. Christopher was a member of the New York City Joint Terrorist Task Force for 14 years.  He was the case agent on such cases as TERRSTOP (the Blind Sheikh Case – Sheikh Omar Abdel-Rahman), the TWA Flight 800 catastrophe and negotiated the surrender of the first hostage taker to give up in the Chase Manhattan bank robbery hostage taking.

In this exclusive interview, I talk to Chris Voss about the secrets of negotiation, and how we can negotiate to win.

Q:  What is negotiation?

[Chris Voss]: Fundamentally; negotiation is about gathering information and processing it to be able to exert influence on an outcome. The best negotiators can do this in real-time through communication.

Q:  How do you learn to negotiate in high-stakes situation?

[Chris Voss]:  Negotiation takes practice- I started in a relatively high-stake setting, on a suicide hotline- and in that environment, you received a fair amount of training, and listened to a number of calls before you even got on the phone with someone. You are as good as your highest level of preparation in any negotiation.

In any negotiation, you develop trust by putting in time where you don’t have any skin in the game; that means you need to watch negotiations happen- and get a feel for how it’s done. You can’t just throw yourself in at the deep end and hope you can swim.

Q:  What are the most common reasons that negotiations fail?

[Chris Voss]:  There are a few common reasons that negotiations fail

The first reason is failing to hear the other side out- you see that constantly.

The second reason is coming in with an extreme position- you see this a lot- look, imagine a dude who says, “this is how I have sex with women, I walk right up to them, say ‘let’s have sex…’ and they have sex with me.’ The point of fact is that the guy didn’t realise how many women he drove away who could have actually got romantically involved with him, and cared – his data is simple every girl he’s ever had sex with, was because he just walked up to them and said let’s have sex!. He has no idea how many deals he’s pushed off the table by taking an extreme position.

Taking extreme positions can not only lead to you bargaining against yourself- but can lead to deals being driven off the table- and that’s a failure.

Q: How do you decide what’s fair in a relationship?

[Chris Voss]:  Listen, fair is relative- I could pay a fair-market value for something and bankrupt your company because you can’t afford to pay it.

Q: What is the role of the illusion of control in a relationship?

[Chris Voss]: Control and leverage are two-dimensional concepts that can lead you to leaving money on the table. By trying to get control you can drive deals away but if you know that the other side is control-oriented? You can get all the leverage by saying, ‘wow… you’re so powerful, you’re in charge… you have all the leverage…’ and once you know that’s what turns the other side on? You can get them to give you want ever you want!

Q:  What is the power of mirroring in negotiation?

[Chris Voss]:  Mirroring is a crazy skill, it’s so insanely effective. If you explain mirroring to people, they’re like nah, that shit’ll never work – but it’s huge. Just repeating the last 3 words of what someone said or picking out 1-3 words from the middle of the statement, can get you the outcome you need. Using mirroring, you feel like you can work Jedi mind tricks!

[Chris Voss]:  There’s spotting liars- and then what you do about t. There’s so much bullshit and deception out there- and most of it comes out of defensiveness and fear- not from evil intent. Listen, don’t get me wrong- some people lie and bullshit you because they are trying to get something out of you, but most of the time- it’s because they’re scared and don’t know how to tell the truth. Alright; so now, if you’ve spotted, I’m lying… now what… should you still make a deal with me? You have to draw people out of the position of fear to really understand them- flat-out asking people if they’re liars will never help you.

Q:  What are some of the outcomes you’ve achieved that you’re most proud of?

[Chris Voss]:  The Jeff Schilling case was a highlight. He was kidnapped, with a significant monetary demand for his release. We got him released without throwing any money on the table. We had to create a breakthrough environment, to enable something good to happen. We weren’t confrontational, we just allowed the discussion to unfold, stayed collaborative- and in that case, the bad-guy loosened their grip on the hostage enough so the hostage could walk-away; thus, the hostage taker was bankrupted. When it was all over, the bad guy called the negotiator I was coaching to congratulating him for doing a great job! By making that call, the bad-guy was indicating that he would work with that negotiator again- and in my view, every negotiation should work like that. You have to say separated from your feelings and work together with all sides to get to a goal- that decision is separate from the outcome, you need to make sure the other side will want to deal with you again.

Q:  Do both sides always need to be ‘happy’ with the outcome of a negotiation?

[Chris Voss]:  It’s a myth that both sides of a negotiation have to be equally happy or unhappy. A year and a half ago, I was speaking at a conference with Kevin O’Leary from Shark Tank. It’s a really intimate event- no more than 200 people and he said, ‘..in my experience, the best negotiations are those which leave both sides a little bit unhappy….’ – in my own view, if it’s meant to be a long-term relationship, is it really good that both sides start out unhappy? Probably not – a great relationship is where people are happy- not just with how things are but with how they got to be.

Q:  How do you gain the permission to negotiate?

[Chris Voss]: First of all, you need to get this middle-ground concept out of your head- that’s not how negotiations work. Gaining permission to negotiate starts by getting the other side to open-up – no matter how bad a situation is, you can get the other side to talk with you rather than at you. All you’ve got to do is- to their face- call yourself every name that they are harbouring about you, it’s that simple; it means you’re demonstrating understanding- the other side may think you’re a jerk- whatever it is- whatever adjective from your culture best describes the worst possible name they could think of for you- all you’ve got to do is look them in the eye and say you feel I am <blank> – that’s super simple, right?

The thing is, it may sound easy- but it’s hard to do- but if you can do it- it can unlock a situation in a heartbeat.

One of the first people we coached to do this was a sales professional for an internet security provider. He was selling servers and wanted to get this client to buy a new server- but they kept being against it. So, we got him to start an accusations audit – he worked on this for two solid days- thinking about all the names they were going to call him- he said it made him feel dirty! And took him to a bad place- but we told him to carry on and keep going. He needed to meditate just to deal with the reactions it gave him, but guess what- it worked- he didn’t just sell them one server, he sold them three.

Q:  What is the power that negotiating can give you?

[Chris Voss]:  Having negotiation skills means that you can weaponize emotional intelligence. Previously, you would only get to learn emotional intelligence under the most extreme circumstances, but it’s such a key skill. If you want people to cooperate with you… if you want to connect with people who you don’t share any common-ground with…. If you want to get a deal done without regrets…. That’s where negotiation techniques can work, across all cultures.

Up Next: A Conversation with Emily Eavis, Co-Organiser of the Glastonbury Festival