Close Search ×
A Conversation with Dennis Crowley, Co-Founder of Foursquare

A Conversation with Dennis Crowley, Co-Founder of Foursquare 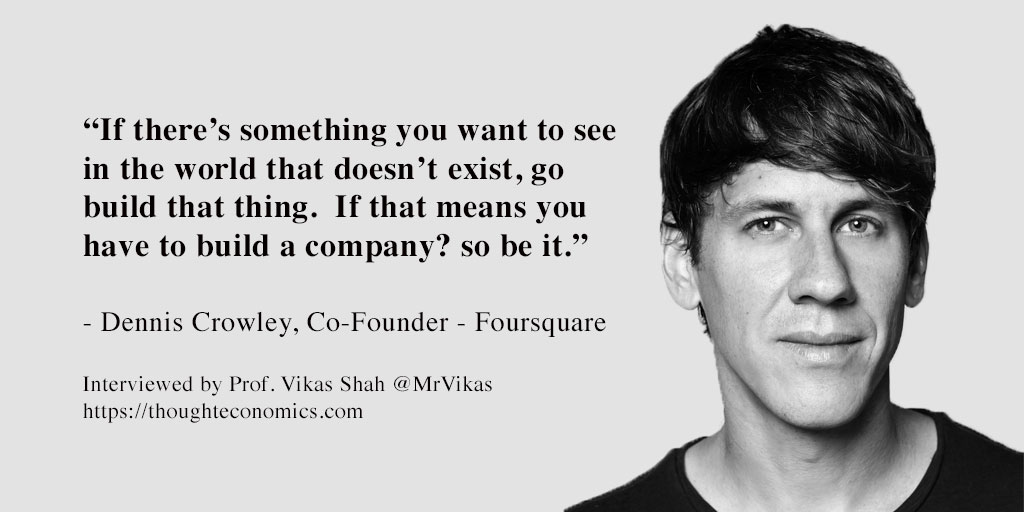 We often dismiss fun to the sphere of our leisure-activities, whereas in fact it is “an absolutely primary category of life, familiar to everybody at a glance right down to the animal level.” (Johan Huizinga).

Glance back through even recent history at the innovations and companies that have made the largest impact, and you’ll find fun is a key aspect of their success.  The iPhone is fun to use, Facebook gives you enjoyment, Google makes searching fun, and gamification introduces in levels of enjoyment and competition into activities which previously were considered mundane or- frankly- never existed.

Foursquare started life in 2009, enabling users to check-in their location, gaining status and competing with others.  The format was instantly addictive, and since then the firm has growth a community of more than 50 million people who have collectively checked in over 10 billion times, and continue to do so at a rate of over 9 million per day.  Alongside the gamification, the platform now offers location based search and discovery- connecting tens millions of businesses in unique ways with their consumers, and generating data insights that help everything from commerce, to global brands and even civic planning.

Dennis Crowley is the co-founder and Executive Chairman of Foursquare, Chairman of Kingston Stockade Football Club and a serial entrepreneur and investor across tech.  I caught up with Dennis to learn more about his career in entrepreneurship.

[Dennis Crowley] I don’t really like the term entrepreneur because I think to some it implies that you start businesses for the sake of starting businesses.

My view is this.  If there’s something you want to see in the world that doesn’t exist, go build that thing.  If that means you have to build a company? so be it.

I give a lot of talks, and always get introduced on stage as being an entrepreneur.  One of the first slides I usually show is a quote from Alexis Ohanian, co-founder of Reddit, that says “Entrepreneur is just French for ‘has ideas, does them’.” It’s actually not French for that, but I like Alexis’ interpretation.

Q: What are your views on startup culture?

[Dennis Crowley] If you’ve seen the HBO show Silicon Valley, you’ll see it’s a caricature of the tech scene in the valley.  It’s funny because it’s true… but that’s not how it is for the broad majority of entrepreneurs.  With Kingston Stockade FC (soccer club) for example, it’s entrepreneurship; but nothing like what you see on Silicon Valley.

I meet startups all the time, and while there’s a startup culture associated with people saying, ‘Hey! Let’s build this hip thing with apps’ that’s totally different that the reality which is people saying, ‘Hey! I have this idea for this product or technology that could make mobile phones more interesting… that could improve cities… or transportation… or health… or medicine.’  I meet with a lot of those folks too, and I feel they are far from what TV can stereotype as tech entrepreneurs.

Q: What enables a startup to become a scale-up?

[Dennis Crowley] It’s a mix of product-market-fit, size of the opportunity, and whether there’s a great behind it.  That said, some ideas are just really good ideas.  Airbnb is a good idea, Uber is good idea, Snapchat just takes off… people love it.

With Foursquare, our original app was a good idea but it wasn’t a hundred million users good idea.  The data behind the app, and what we do with the data? That’s our good idea.  That’s our hundred million dollars in revenue idea.  When people think of Foursquare, they think of our two apps (Foursquare City Guide and Foursquare Swarm) – but the apps are only a small part of the reason we’re performing really well as a company.  The bigger story is what we can do with the data the apps generate, and the technology we’ve built to enable that.  That is the reason we’ve been able to scale.

I made a check-in service called Dodgeball before Foursquare, it was moderately successful and we sold it to Google.  When we started Foursquare, we knew we needed more people to use it- so we put game dynamics into it.  That was a calculated decision to make it more approachable and accessible and interesting, and that’s what made it mainstream.  We knew early on, however, that the big play was in the data and what you could do with the data.

Q: What is the role of brand to startups?

We because we have a good story, and because we’re good storytellers, we’ve been fortunate to have found people that wanted to help us continue to build or story and continue to tell our story..

With Kingston Stockade FC though, I don’t think we’ve properly defined the brand yet.  For sure it has an identity, but what does it stand for? I want it to stand for being community-driven soccer and for being a part of a movement that’s trying to be a thorn in the side of closed-system soccer.  I’d like to get a thousand other “stockades” together and do something really big and meaningful and try to reinvent the closed soccer system.  In my head, that’s how I see it – but I don’t think we’ve told that story yet.

Q: How do you stay motivated and creative?

[Dennis Crowley] Different things energise different people.  I get energised from building things that people like – such as when we launch a new feature in Swarm or the Foursquare City Guide app.  That makes me feel great and makes me want to keep building.  When we built a soccer team and a thousand people showed up to watch them play? That also makes me feel great and energizes me to make that product and experience better for fans.

I’ve met people who are totally motivated by being in the press, or motivated by money, and so many things… but for me, it’s about making sure people enjoy the things we’re building.  That’s what keeps me motivated.

Q: What has been the role of education and mentoring in your life?

[Dennis Crowley] At Foursquare we’ve worked with executive coaches and CEO coaches and we’ve made them accessible to our management team as well, and I think that’s been helpful.  For me personally, I have a lot of friends who are startup founders who I look up to and connect with regularly; it’s a bit of a support group, and really great for advice.  We also have some real rock star venture capitalists on our board, and they’re great too.

When we were doing Dodgeball at ITP (grad school), there weren’t a lot of people who had done successful startups in New York.  We had to learn a lot of things from scratch, make our mistakes along the way, and struggled to find people who we could ask questions to or who could mentor us. We ran into similar problems when we started Foursquare.

Now? I try to spend as much time as I can giving talks in the city, getting coffee with entrepreneurs and speaking to students.  Here’s the thing:  if people really want to do something, all they need to do is meet someone who’s built something from scratch to show them that it can be done by someone just like them.  That’s how I started.  I used to work at a tech company, and the founders were only a couple of years older than me.  I used to think, ‘I wanna’ be these guys!’ – I’d just met them and realised that if they could do it, I could too!  I want other people to have that feeling.

You need experts around you to help you get back on course, or call you out on your bull***t .  You need to be open to that feedback in your life.

Q: What is the role of failure in the entrepreneurship journey?

[Dennis Crowley] Sometimes I don’t think people know what they’re signing up for when they become entrepreneurs.

When you go to the airport and stop at a newsstand, it’s wall-to-wall cover stories about successful entrepreneurs, but nobody talks about the failures and very rarely do they talk about the very hard times.  Nobody wants to admit that their company almost went out of business 10 times.

All the talks I give are about failure, how hard it is, how much this job kinda’ sucks and genuinely how tough it is.  People often go into this world thinking it’s all roses, and it’s not.

When people don’t talk about this stuff, they think they’re the only people to have ever experienced those challenges.  The more people talk, the more everyone realises these are journeys which are shared.  Successful entrepreneurs have to speak out about the bad stuff, not just the good.

[Dennis Crowley] What investors want the most is a team committed to a cause for the right reasons (passion about solving a problem, not passion about financial game), who can go and get people to buy into the vision, and who can build and manage teams that will help create this vision.

I hate to sound like the idea doesn’t matter, but you can’t expect all VC’s to understand the idea.  They’ll see an opportunity, but it’s the team you rely on to execute.

I know that I’m good at this part of the game, but I’m only good if I’m really passionate about the idea.  With Foursquare, they’ve put me on stage to talk about stuff I’m not passionate about sometimes, and I have a really hard time doing it.  This is why the work we’re doing with Kingston Stockade FC is so interesting; I don’t really know what I’m doing, I’ve never done anything in sports before, but I’m really passionate about it, I have an idea I think works- and people want to follow us and be a part of it.  I think have the skills to do it, but I don’t always know if the idea I’m chasing is the right one.  I’m so used to having some many of the answers when it comes to Foursquare, and Stockade FC feels like the opposite – having to learn a whole new industry (sports) on the fly.

I don’t even know if it’s going in the right direction, but there’s something there, and I’m passionate enough about it to try to find the right answers and make it happen.

Dennis Crowley is the co-founder and Executive Chairman of Foursquare, the location technology company that powers products used by more than 50 million people every month across 100 countries. Previously, he founded Dodgeball, one of the first location-based mobile social services (acquired by Google in 2005) and help to build early location-based games PacManhattan (2004) and ConQwest (2004). Dennis is also the Chairman of the Kingston Stockade Football Club, a semi-professional soccer team out of Hudson Valley, NY that competes in the 4th division of the US Soccer Pyramid.

Up Next: The Business of Invention