Close Search ×
Order the Book Subscribe Free
A Conversation with Ece Temelkuran on How to Lose a Country, in 7 Steps.

A Conversation with Ece Temelkuran on How to Lose a Country, in 7 Steps. 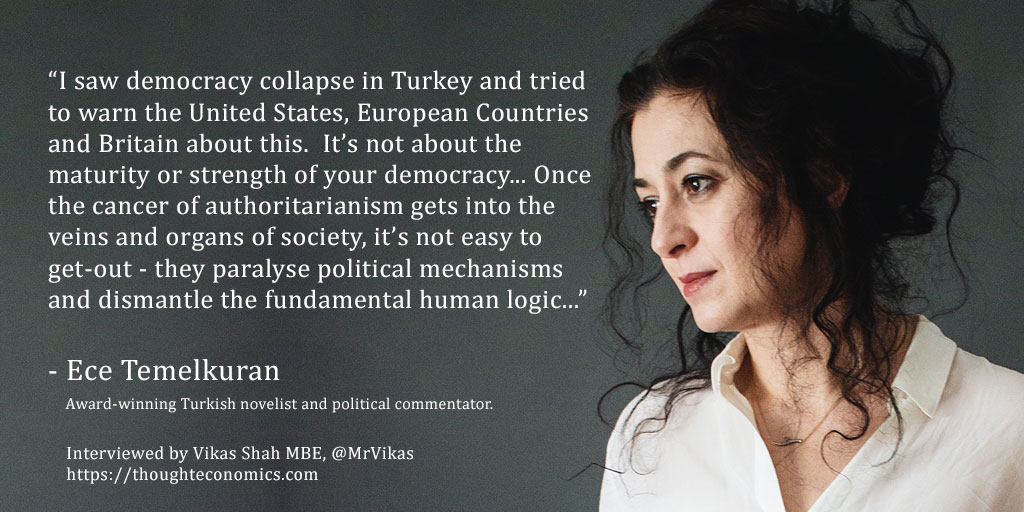 “I am one of the early birds…” Ece Temelkuran told me, “I saw democracy collapse in Turkey and tried to warn the United States, European Countries and Britain about this.  I’ve been telling people that what you think is normal, or a passing phase, is part of a bigger phenomenon that affects us all.  Somehow though, European democracies feel they’re exceptional – and too mature to be affected by neofascist currents.”

Ece has seen this all before.  In her incredible 2019 book How to Lose a Country: The 7 Steps from Democracy to Dictatorship, she notes, “We have learned over time that coups in Turkey end the same way regardless of who initiated them. It’s like the rueful quote from the former England footballer turned TV pundit Gary Lineker, that football is a simple game played for 120 minutes, and at the end the Germans win on penalties. In Turkey, coups are played out over forty-eight-hour curfews, and the leftists are locked up at the end. Then afterwards, of course, another generation of progressives is rooted out, leaving the country’s soul even more barren than it was before.”

Ece Temelkuran is an award-winning Turkish novelist and political commentator, whose journalism has appeared in the Guardian, New York Times, New Statesman, Frankfurter Allgemeine and Der Spiegel. She has been twice recognised as Turkey’s most-read political columnist, and twice rated as one of the ten most influential people in social media (with three million twitter followers). In this exclusive interview, we discuss the dangers of populism, authoritarianism and fascism, and why we need to act now.

Q: What are populism and nationalism?

[Ece Temelkuran]:  Today, there is less time to understand the differences between nationalism, populism and authoritarianism.  In Britain, democracy is literally crumbling at the hands of a strange guy with funny hair!  People simply aren’t recognising the dangers that lay ahead, so there’s not enough time to get into definitions

One truth is that you cannot really know what populism is until you experience it.  Populism is the act of politicising and mobilising ignorance to the point of political and moral insanity.  Nationalism as we know, comes from the phenomena of nation-states – and it’s quite ironic therefore that we are now talking more and more about the failure of nation states and the failure of supranational and international institutions as well… and meanwhile neo-nationalism is on the rise.

It’s not about the maturity of your democracy, it’s not about the strength of your institutions either…. Once the cancer of authoritarianism gets into the veins and organs of society, it’s not easy to get-out – they have this very specific way of paralysing political mechanisms and dismantling the fundamental human logic.

There’s not much time left for British democracy; to tell you the truth, I would never have anticipated one of the world’s oldest democracies being shattered at such speed, with almost no resistance… I am really shocked and appalled.

Q:  Are we seeing the consequences of people not being politically educated and engaged?

During the 1970s there was a war on politics in our education system – a zeitgeist was imposed such that politics was seen as dirty, boring, unnecessary.  It became the norm for people to say ‘I hate politics!’ without realising that is actually one of the most political statements that can be made.  If you say ‘I hate politics!’ you are removing yourself from the public sphere, and are rejecting the ability to be a political subject.  You are submitting yourself to a higher order, a powerful ruler…

We are seeing this happen extremely fast in Britain and the United States.  People are losing their basic rights as citizens… We experienced this in Turkey too – it was an earthquake hit our houses and we realised we hadn’t done enough to keep the walls strong…

Q:  Why is democracy so fragile?

[Ece Temelkuran]:  The real owners of democracy have been pushed away from democracy, and this began when our democracies – in their current state – stripped citizens of an integral part of democracy, social justice.  When you remove social justice from democracy it becomes a feeder for the elite – and that’s why progressive organisations can only make themselves heard on the streets, not through democratic and governmental institutions… It was perhaps the Cold War that kickstarted this, because social justice was so related to socialism.

It’s hard for people to defend democracy when it cannot defend them against social injustice.

Q:  What gives you hope for the future?

Thanks to social media, we are constantly faced with the worst side of human beings – but often we are shielded from seeing the other side, the good, the wholeness of the human story… we’ve come to expect outrage and to feel appalled – but we have to realise politics is not about evil and crazy, it’s about real human communication.  I do believe that going back to human communication, back to old school communication a little bit would make a lot of difference in people’s perspective on human beings condition today, and current political situation.

I’ve often thought that maybe there is a certain hormone in human beings that we can only produce it when we are face to face.  And it’s the hormone of shame – it becomes absent when you are communicating on social media and you become worse than you are.  We just invented this.  We just invented social media, this is a new invention – we cannot really control it, and we are experiencing the childhood diseases of social media playing out in our democratic institutions….

Up Next: The Bridge Over the Pond