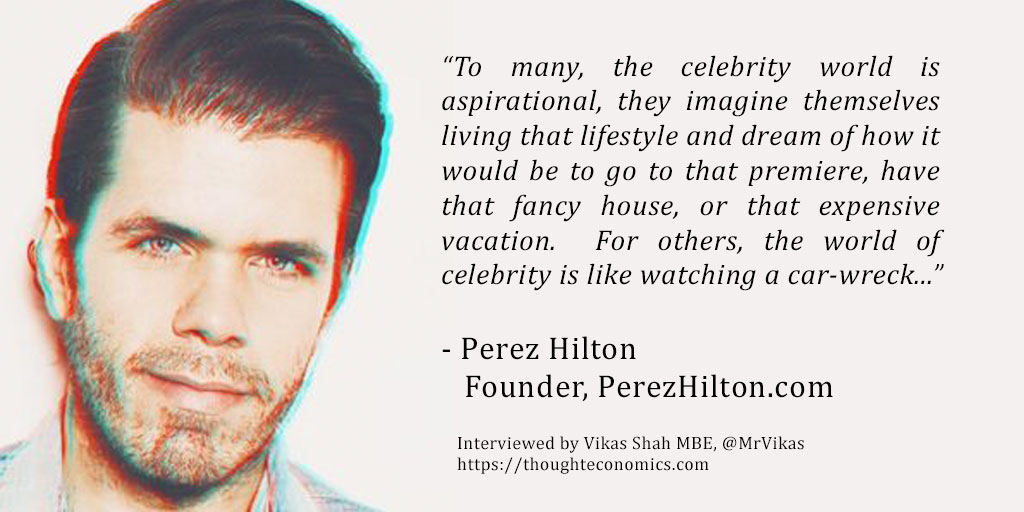 We’re a curious, social, and hierarchical species which has spent millennia fascinated by our heroes, our rulers, our elite, our artist and intellectuals.

A century ago however, “…a novel system of social status emerged in human history. From its beginnings on the coasts of North America, it grew into a global hierarchy, entwining itself into huge spheres of the social world. By the late 20th century, members of the high-status group had come to expect obsequious deference, exact significant financial tribute, and lay claim to legal privilege, as aristocratic and caste elites did in earlier centuries. But the new status system was different. It was born out of capitalism and mass media, and its dynamics reflected the conditions of the modern era. This system is called celebrity…” (Sociological Theory, Vol. 25, No. 4, 2007)

Today, we are engulfed in celebrity culture – a phenomena which, driven by the growth of the internet and mass media, has propelled exceptional and unexceptional people into status, wealth and notoriety.

Perez Hilton is one of our world’s foremost commentators on celebrity culture.  Since launching PerezHilton.com in 2004, his site has grown to receive over 300 million hits per month – making him a celebrity in the process!  The LA Times calls Perez, “like US Weekly, the Star, the Enquirer and Life & Style all rolled into one sweet yet snarky, sagacious yet salacious gay man.”  Perez was named the #1 Web Celeb for 2007, 2008, and 2009 by Forbes Magazine and has recently been tapped as one of the 15 most influential Hispanics in the US by People in Espanol and named 2009 Hispanic of the Year by Hispanic Magazine.

I caught up with Perez to learn about the realities of celebrity culture in the digital age.

[Perez Hilton]: The world of celebrity offers an escape from the real world, and offers different things to different people.  To many, the celebrity world is aspirational, they imagine themselves living that lifestyle and dream of how it would be to go to that premiere, have that fancy house, or that expensive vacation.  For others, the world of celebrity is like watching a car-wreck.  I’m on the freeway right now as I speak with you, and it’s human nature that if there’s an accident, you’ll slow down and look…

Q:  Why did you choose to write about celebrity culture?

[Perez Hilton]:  When I started blogging, I knew right away that I didn’t want to talk about myself; which was pretty much the opposite of what most people were doing back in the 2000’s.  When I started blogging in 2004, most blogs were like journals – people were talking about what was going on in their daily lives, but I had no interest about talking about me on the daily; but celebrities always fascinated me, and they gave me great material to work with.  The very first day I started my blog, it was a hobby, on a whim – just sharing my opinions on celebrities – and it grew from there.

Q:  How intrusive is the relationship between media and celebrity?

[Perez Hilton]:  The media has always had the ability to be very intrusive, I don’t think it’s any more so now- in fact, in many ways it’s the opposite.  As a whole, I think the media is a little more respectful now than it has been.  I, for example, have a no kids policy on my website meaning I won’t use any paparazzi photos of celebrities’ children, whether at a playground, or when they’re being picked up from school.  I will only post pictures of children that the celebrities themselves have posted on their social media- usually from when they’ve been to a red-carpet event or in a situation where it’s understood they will get photographed.

While I don’t think the media is more obtrusive, given what’s happening in America, a lot of celebrities are echoing the sentiment that the media is the enemy – and a lot of them don’t like the media, or bypass it completely.  Many celebrities now choose to not do press at all or speak to their fans through social media exclusively – Beyoncé was the first to do that, she hasn’t granted an interview in years and wants to let her music do the talking for her.  Taylor Swift followed, and she too hasn’t given any interviews in years.  They are the exception to the norm however, and as musicians – unlike actors – are not always obliged to do press contractually.  For actors – whether they like it or not – press is part of the job.

Social media has enabled celebrities to directly communicate with a large amount of people and they use that for damage control and to cause damage.  Celebrities say things they regret, it happens regularly….

Q:  How positive has social media been for celebrities?

[Perez Hilton]:  Social media has been a wonderful thing; it allows celebrities to bypass the middle-man.  Many celebrities have also been able to monetise their social-media and make extra money, often very serious amounts.

Crucially, social media gives celebrities the opportunities to speak for themselves and set the record straight if something was written about them inaccurately or based on rumours and lies.

Having said that, not every celebrity is on social media, a lot of them choose to not engage; like Emma Stone for example, who doesn’t have any social media… as the years go on, more of them join.  Julia Roberts last year joined social media and now has an official Instagram account.

The phenomenon of trolling definitely impacts celebrities who are very sensitive to what people are saying online, but they are also the same people who would have been very sensitive to what the mainstream media, or comedians, would say about them.  You either let that affect you or you learn to grow extremely thick skin.

Q:  What are your views on influencer culture?

[Perez Hilton]:  I was one of the first online influencers, so of course I’m a fan of influencer culture!

I just hope that those who become influencers make smart choices; it’s the kind of attention that comes quickly and is very hard to maintain.  The top 10 YouTubers 10 years ago are not the top 10 YouTubers now (with some exceptions).  There are a few people that remain, and who have maintained longevity, but for the most part, influencer culture is extremely short lived so I would encourage all influencers to work hard, not overspend, save as much as possible, say yes to everything, be easy to work with – all those important things.

Q: What do people often misunderstand about celebrity culture?

[Perez Hilton]:  For the most part, there are more average celebrities than superstars.  When most people think of celebrities, they think of A-listers, but there’s also B-list, C-list, D-list, F-list and even Z-list.  Here’s a perfect example…. A friend of mine is on the American TV show, NCIS LA.  It’s one of the highest rated shows on television, but also one of the least buzzed about.  It’s been on air forever, it’s made everyone on the cast very rich, but it’s just not a buzzy show.  All the stars of the show are celebrities, but the vast majority of people couldn’t name who they are; my friend happens to be Barrett Foa – one of the main cast members – but the average American who doesn’t watch the show probably has no idea who he is!  Here’s the thing though… he’s living the dream! He’s a working actor, and is getting paid a lot of money as a key cast member of a long running TV show – he gets all the perks of celebrity, without much of the negativity that comes from being an A-lister.

Q:  Has the culture of celebrity had a positive impact on society?

[Perez Hilton]: We have been interested in celebrities since the dawn of time.  Jesus was the first celebrity, then the royal families….

We sometimes don’t realise, but celebrity culture exists even at a micro-level… It’s human nature to be interested in the captain of the football team, the head cheerleader or who is doing what with who.  It’s human nature to be curious about those we perceive to be in elevated positions; not necessarily positions of power.  Presidents of a student body… even your own Mother.  I grew up with a very informed mother, she always knew what was happening with my neighbour across the street, my neighbour down the block, she was the most informed person in the neighbourhood and for her that was her celebrity culture, her community culture.

Q:  Are you concerned about the overlap between politics and celebrity culture?

[Perez Hilton]:  Politics and celebrity culture have always been deeply entwined.  What happens in any society, country by country, is that we go through waves of celebrity focused and political focus – it’s linked to many things including election cycles.  Just take a look through American history though, and you’ll see Ronald Reagan, a former actor who was our President – and Clint Eastwood, who used to be Mayor of a small town in California.  There’s always been a blurring of the lines when it comes to the worlds of entertainment and politics, with each group borrowing strategies and tactics from the other.

Up Next: A Conversation with Nile Rodgers and Merck Mercuriadis