A Conversation with Jacqueline Novogratz, Founder of Acumen 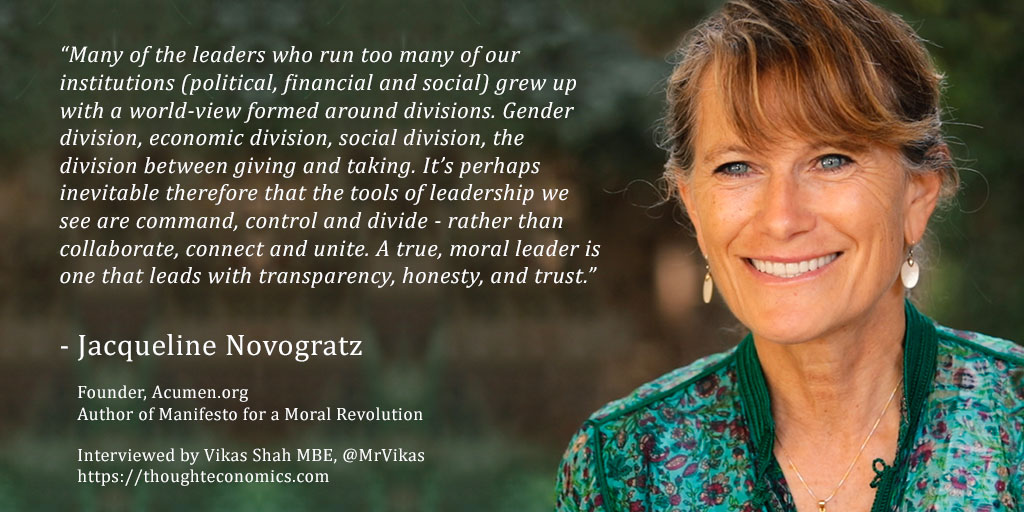 Jacqueline Novogratz has made a remarkable impact on our world. Her work began in 1986 when she quit her job on Wall Street to co-found Rwanda’s first microfinance institution, Duterimbere. The experience inspired her to write the bestseller, The Blue Sweater: Bridging the Gap between Rich and Poor, and create Acumen (in 2001). Under Jacqueline’s leadership, Acumen has invested $128 million of patient capital to build more than 130 social enterprises across Africa, Latin America, South Asia, and the United States. These companies have leveraged an additional $611 million and brought basic services like affordable education, health care, clean water, energy and sanitation to more than 308 million people. Acumen has also built a global community of more than 500,000 moral leaders who together are driving solutions enabling millions of low-income people to change their lives. Jacqueline has been named one of the Top 100 Global Thinkers by Foreign Policy, one of the 25 Smartest People of the Decade by the Daily Beast and one of the world’s 100 Greatest Living Business Minds by Forbes and she chronicles these experiences in her new book, Manifesto for a Moral Revolution: Practices to Build a Better World.

In this exclusive interview, I spoke to Jacqueline about why we need a moral revolution in our world.

Q:  Why do we need a moral revolution?

[Jacqueline Novogratz]:  I’ve spent my whole life focused on trying to solve the toughest problems of poverty. Along the way, I’ve built five different organisations – most recently (for the past 20 years) Acumen – a culmination of honing the tools of structuring capital, building talent, measuring what matters and understanding the metrics needed to create social impact. I’ve been reflecting a lot recently and thinking about what I would say to the next generation about how change really happens. We have influenced the lives of over 300 million people through the companies that we’ve invested in, and the leaders we’ve supported, but we have to do better. We cannot focus only on the material aspects of poverty- we must address the poverty of spirit that’s present in every one of our broken institutions: health systems, economic systems, criminal justice systems, and food systems. If we are going to solve the toughest problems we face as a world right now, we’re going to need new operating principles that are compatible with a deeply interconnected world, layered with a shareholder capitalist system that puts profit at the centre. A moral revolution is a call towards this new practice.

Q: How do you reconcile the values of the ‘market’ with social change?

[Jacqueline Novogratz]: I’m constantly bemused when I hear about some amazing energy or agricultural company that is for profit, but works with low-income people and a non-profit leader says, ‘you know Jacqueline, charging people who are poor is immoral…’ – you know what else is immoral? 700 million people who have no electricity. We need to have actual conversations about how to solve problems – and hold the uneasy tension of who pays for it, and how. We have to put the poor first, we have to solve problems, and do so in a way that is sustainable.

Q: How do you keep going with such complex challenges?

[Jacqueline Novogratz]: We don’t talk enough about the secret of doing the work of social change. And we certainly don’t talk about how long the journey needs to be. Those who have the most meaningful, purpose filled lives tend to dream so big – that those dreams will rarely be completed in a lifetime. What keeps you going is the beauty you encounter at every juncture of the path. There’s beauty in the communities which you serve that are marginalized and vulnerable, even in the meanness and darkness that surrounds them. They create song, art, ritual and joy – and we can learn so much from that. There’s a beauty in the way we show up, in paying attention, in transcending the lines of difference that give way to our own humanity. A friend of mine (who is a Unitarian Minister) said, ‘spirituality is the act of being open to everything…’ and if you come to the world from that place, if you learn to listen rather than try to convince or convert, if you want to work with – rather than control or change – a field of understanding opens that reveals your own humanity, as well as those you work with.

Here in the United States, and across the world, there are so many human beings in deep anguish- protesting about systems they see as being broken and unfair. It would be easy not to listen, to turn a blind eye… but that’s been done for too long, and we have to understand people, and listen to those long-unheard voices.

Q:  What worries you about our future, and what gives you hope?

[Jacqueline Novogratz]:  We are sitting on a precipice. On one side is peril, and on the other is possibility – and it would be really easy to fall into peril.

I have worked in Rwanda before and after the genocide, for almost 30 years now, and I saw how easy it is for demagogues to prey on the broken parts of human beings, on our insecurities. Inside each of us are monsters and angels- there are no divisions between good and bad people- and I’ve seen how those times of insecurity can make us do terrible things to each other. That is the perilous path- which has the contours of a triple pandemic – one of health, economy and climate.

What gives me hope and a sense of possibility is that people seem to be having a moral awakening that’s allowing them to say we can make this change. I have seen extraordinary changes in my life: we live in a much better world today (as hard as it is to believe) than 30 years ago. There are more healthy people, more possibilities, and our world has grown in numbers and complexity. It’s on all of us therefore to continue fighting for human dignity, to seize this moment – with all of its problems – and to build models for social, environmental, political and cultural sustainability that allow us to point to a vision of success based on our shared humanity.

I have worked in dozens of countries, and in every country which I have worked I have met those kinds of moral entrepreneurial leaders who don’t just want to talk about change.  They have committed their lives to building it. So, I know it’s possible.

Q:  Why is it important to just start?

[Jacqueline Novogratz]:  So many people say, ‘Jacqueline, I would love to change the world- but I don’t know my purpose yet…’ Purpose doesn’t come to people sitting at the starting blocks and thinking about purpose. You have to live it.

When I was younger, I knew I wanted to change the world- but I didn’t know how. I became an accidental banker, and part of me thought what am I doing in this bank?! But another part of me thought wow, I am seeing the world, and building the skills and tools that are teaching me what to do! I also realized that a bank was not going to be where I would do anything for poverty because, at that time in the bank’s history, it excluded low income people. I didn’t start out thinking now ‘I have to leave the bank and change the world’ – instead, I tried working with the bank and sharing my insight that instead of writing off hundreds of millions of dollars that they had given to elites that were moving out of the country, they could, perhaps, start by banking low income people who would be better repayors (we have since found out that empirically is the case). That was the first step that led to everything else, and opened so many more opportunities to see problems and challenges that I had to learn to fix.

Starting a micro finance bank in Rwanda taught me very early that despite all the rhetoric about micro-finance leading to entrepreneurship and job creation, the reality was that most people aren’t entrepreneurs and they would get a small loan and hire a couple of people in their family. That got me thinking: what’s so hard about starting a business?

I took my next leap…. I found this charity for 20 single women (who were called prostitutes by the city in Rwanda). I convinced the director (who herself, was a formidable individual) that instead of relying on charity where they were making 50 cents a day, they could turn into a business. It was painful… one woman stole from us… and I had to learn to look at people as being fully human, not idealizing them. They also saw me as this girl scout – people said ‘there goes Jacqueline, the overly optimistic do-gooder American in the slums of Kigali with her little bakery…’ had I let the meanness of people stop me, I would have missed out on one of the most important experiences of my life. Even though, to many people, it may have seemed like a tiny little project for a former Wall Street Banker, it would take a whole book to explain how that one little blue bakery in Kigali informed the work I do even 30 years later.

Up Next: Understanding Democracy