Close Search ×
Order the Book Subscribe Free
A Conversation with Joseph S. Nye, Jr. on Power in the Modern World.

A Conversation with Joseph S. Nye, Jr. on Power in the Modern World. 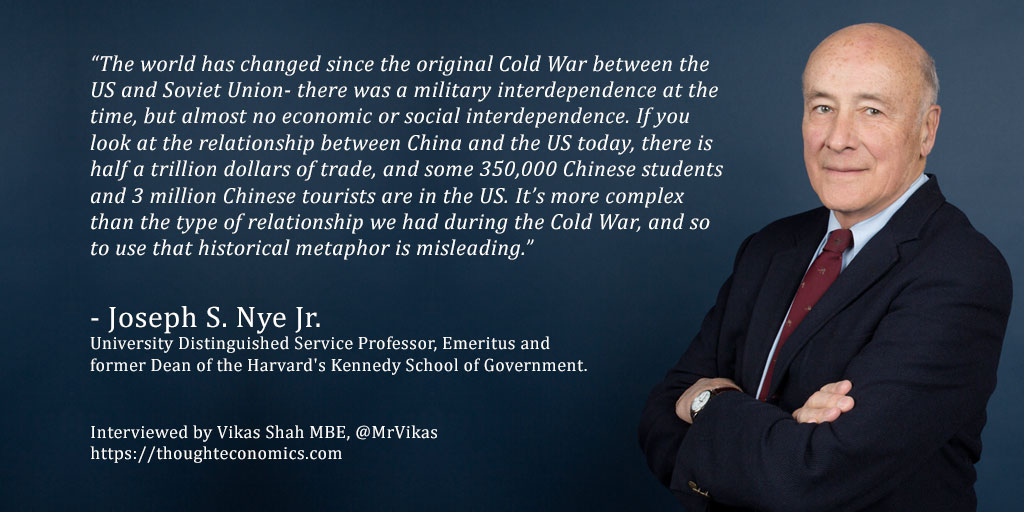 Joseph S. Nye, Jr. is University Distinguished Service Professor Emeritus and former Dean of Harvard’s Kennedy School of Government. He has served as Assistant Secretary of Defense for International Security Affairs, Chair of the National Intelligence Council, and a Deputy Under Secretary of State. His most recent books include Do Morals Matter? Presidents and Foreign Policy from FDR to Trump, The Powers to Lead, The Future of Power, Presidential Leadership and the Creation of the American Era, and The Power Game: a Washington Novel. He is a fellow of the American Academy of Arts and Sciences, the British Academy, and the American Academy of Diplomacy. In a recent survey of international relations scholars, he was ranked as the most influential scholar on American foreign policy, and in 2011, Foreign Policy named him one of the top 100 Global Thinkers.

In this exclusive interview, I spoke to Prof. Nye on the changing dynamics of power in our world.

Q: In international relations, what does it mean to have power?

Q:  Why has neoliberalism?

[Joseph S. Nye Jr.]: I have become skeptical about using terminology such as neoliberalism. At the time Robert Keohane and I wrote our book Power Interdependence in the 1970s, approaches to international relations were dominated by realism. States were the only actors, force was the major instrument and security was the major goal. Our view was that the world had become far more complex, and the theories we developed to explore that were tagged as neoliberalism. Subsequently, that got mixed up with the Reagan and Thatcher neoliberalism which had nothing to do with our approach. Ours placed more focus on institutions and trans-national relations- we didn’t reject realism, we said ‘start with realism, but don’t stop there…’ in my latest book Do Morals Matter I speak to the three basic approaches: realism, liberalism and cosmopolitanism. You start with realism, and then ask what would happen if you widened the aperture to include liberalism and neoliberalism, and then what would happen if you widened further to include cosmopolitanism. I would consider myself a liberal realist and get annoyed when people try to pigeonhole complex relationships and systems into labels which have become muddied over time.

Q:  How do the complexities of our world impact our approach to the mode of relations?

[Joseph S. Nye Jr.]: People are now talking of a new ‘Cold War’ with China. This is a very misleading use of history. The world has changed since the original Cold War between the US and Soviet Union– there was a military interdependence at the time, but almost no economic or social interdependence. If you look at the relationship between China and the US today, there is half a trillion dollars of trade, and some 350,000 Chinese students and 3 million Chinese tourists are in the US. It’s more complex than the type of relationship we had during the Cold War, and so to use that historical metaphor is misleading.

Q:  What are your views on the balance of power between East and West?

[Joseph S. Nye Jr.]: You have to make clear the different domains and different aspects of power. If you look at the world economy, there has definitely been as shift of economic power from West to East. Some call this the rise of Asia, some call it the recovery of Asia, because if you go back to 1800, Asia had more than half the world’s population and more than half the world’s economy. During the 19th century, the industrial revolution spurred enormous growth in Europe and North America leaving Asia down in the range of 20-25% of the world’s economy (whilst still having half the world’s population). The 20th and 21st century are the recovery of Asia, and when the world economy shifts back to what you might call ‘normal proportions’ between population and wealth, that naturally has an impact on economic power. The extent to which that economic power is then invested in military issues therefore has an effect on military power.

All said, I still think the United States remains preeminent in terms of economic and military power in our world, and still constitutes a quarter of the world’s economy measured at exchange rates.

Q: How does authoritarianism sit alongside modes of power in our world?

[Joseph S. Nye Jr.]: There are, and always have been, many more authoritarian leaders than democratic states. Very few of these [authoritarians] have accomplished what China has- an impressive record of economic growth which has raised hundreds of millions out of poverty. China has had economic success with authoritarianism, but that doesn’t mean Zimbabwe will or Hungary. The notion that there is a single ‘form’ of authoritarianism is nonsense. China has created a new form of capitalism- state capitalism. Some people call this ‘market Leninism’ or a communist party without communism. It’s a hybrid system which has been very economically successful, and only certain Asian countries (such as Vietnam) have been able to use this remarkable system.

Q:  What will be the role of the United Kingdom on the world stage after Brexit?

[Joseph S. Nye Jr.]: I was very worried about Europe at the beginning of the Covid pandemic, but I thought the recent steps taken by Merkel (Germany) and Macron (France) were essentially a ‘Hamiltonian’ moment, this collectivization of debt will be essential for the European recovery. Britain is obviously outside that, and I think what happens to Britain on the world stage will depend on how it manages Brexit. If it tries to regain empire through the restoration of commonwealth, it will not succeed. If it maintains a position of being close to Europe, working closely with Europe whilst also building a field within the anglosphere- it may find itself a unique niche. Thus far however, I don’t think Britain has shown its ability to deal itself a game that will allow that approach.

Q:  What are your greatest hopes and fears for today’s world?

[Joseph S. Nye Jr.]: In the short-run, my fear would be that we’ve mismanaged the relationship with China through miscalculation to produce a 1914-like situation. I think it’s a low-probability outcome, but it could of course be mismanaged. Similarly, there’s obviously the danger of nuclear weapons and a miscalculation leading to their use, and inevitably therefore, catastrophic outcomes. I also worry that we’re simply not taking climate control and climate change seriously enough. One must also be acutely aware of geographic-interdependencies that have emerged in our world, the Covid Pandemic (which will certainly not be the last that we face, nor the most damaging) has shown this clearly. Nevertheless, there are things we can be positive about. World poverty has been reduced significantly- and whilst everyone seems to think the world is getting more impoverished, this simply is not the case. Scientific cooperation has improved too, and this has allowed significant advances in global health.

There are moments for hope, and moments for extreme concern – and our job as analysts, and citizens is to try and push forward the hopeful aspects, while being mindful of the latter.

Up Next: A Conversation with Elif Shafak