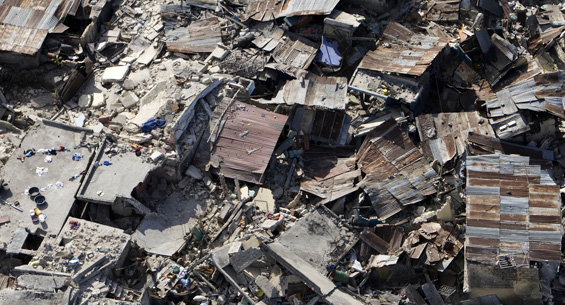 “Just two days after Haiti’s earthquake, Leonel Fernández, the president of the neighbouring Dominican Republic, ordered a helicopter to fly him over the border for an unannounced visit. He was worried that his Haitian counterpart and friend, René Préval, was still incommunicado. What made this neighbourly gesture remarkable was that the two countries that share the island of Hispaniola have long been divided by mutual suspicion. During a previous term in the 1990s, Mr Fernández became the first Dominican president to visit Haiti in 60 years.” Economist, Feb 2010

Not only did Fernandez visit Haiti, but his country has helped a lot, sending crews of engineers and doctors along with mobile kitchens, buses refitted as temporary schools, and teams to build hospitals and other facilities.  These are huge gestures of goodwill between nations where children are taught of the atrocities their people have suffered at each others hands, and where significant racism still exists between parties.

The actions of The Dominican Republic do, though, highlight the fact that crises are often a great opportunity for parties to heal old wounds, as sides are brought together by a common goal (in this case, the well being of the citizens of Haiti, in the face of a natural disaster).  Fernandez’ may well hope that his actions will start to build new-found sense of trust between their nations, but many cynics argue he is proactively working to prevent a flood of refugees into his country from Haiti.

In business, crises can emerge from many sources. Looking at just a few of these.

Economies are, by their nature, cycling through periods of boom and bust.  In periods of boom, companies tend to be introverted; hell-bent on building and defending market-share.  In times of ‘bust’ however, companies tend to look towards their competitors, taking a degree of “safety in numbers”.  The global economic meltdown (for example) has seen many banks (who were previously adversaries) merge or enter into partnership agreements to gain economies or competitive advantage in the ‘restructured’ market.

In the technology world, we have seen recently that, “The proposed link-up between Microsoft and Yahoo has been approved by European regulators, paving the way for the two companies to combine their search engines and take on Google together.” (Guardian, 19th February 2010) – illustrating how two adversaries (MSN Search, and Yahoo Search) are joining-forces to fight off a single market-leading competitor (Google).  Similarly, we see in pharmaceuticals a spate of mergers to build strength in the market in the face of Asian generics entering the European and American drugs markets.

Recently we have also seen an interesting case where Google (in particular) suffered at the hands of Chinese hackers after deciding to discontinue censoring of search results into China.  The threat of such attacks is not unique to Google, who rallied the support of competitors in the market, leading to unusual headlines such as “Yahoo Inc. is “aligned with Google” in condemning the kind of cyber attacks that Google Inc. said Tuesday it experienced from China, a Yahoo spokeswoman said.” (WSJ, January 2010).  Other examples of such huddling can be seen in the music and entertainment industries, as participants rally around key technologies in digital rights management to fight the ‘combined threat’ of piracy.

While each of these threat environments is very different, the underlying principle is the same.  Participants in each market, faced with threats, had to put competitive behaviour aside and realise the strength of collaboration.  This behaviour already shows through in consumer markets, where collaboration has (clearly) empowered today’s retail consumers, and is extending into the academic world with peer review and collaborative research enabling universities and academic bodies to solve problems, sharing the intellectual property created.

For commercial markets, a shift to collaborative economies is not far behind, and businesses must change their thinking about the nature competition, defending value, and other strategies if they wish to grow in an uncertain future.

Up Next: A Conversation with Justin Sun, Founder of TRON & CEO of BitTorrent.