A Conversation with Mitch Lowe, Co-Founding Executive of Netflix, Former CEO of Moviepass and Former President of Redbox. 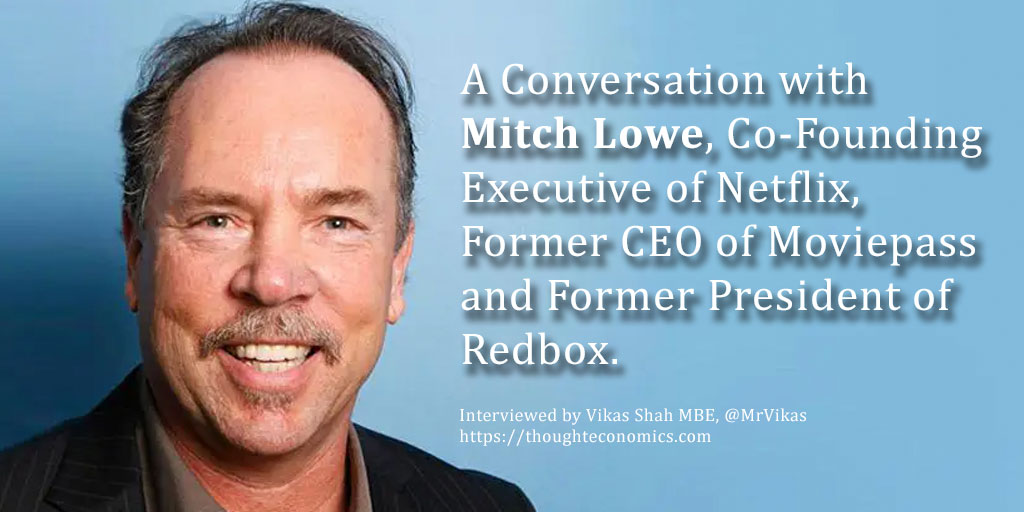 Mitch Lowe has been a leader in some of the most influential and disruptive companies in the entertainment business. Mitch never graduated from high school. After a youth spent smuggling goods and money in Europe, he invested in and eventually ran video stores in the 1980s and 1990s. He was a cofounding executive of Netflix. After leaving Netflix, he became an executive at McDonald’s, eventually creating the DVD kiosk business that would become Redbox. Under his leadership as president and COO, Redbox became the third largest video rental company in America, growing to 35,000 locations and $1.5 billion in revenues. Mitch invested in and became CEO of MoviePass, a movie theatre subscription service that acquired three million subscribers in eight months. While MoviePass never succeeded, it significantly influenced the trajectory of the business of movie theatrical exhibition.

In his new book Watch and Learn, Mitch gives an inside perspective on the dramatic evolution of the entertainment business, from the days of early cable television, Beta, and VHS to a world where consumers have infinite choice and control of the movies they see.

In this interview, I speak to Mitch Lowe, Co-Founding Executive of Netflix, Former CEO of MoviePass and Former President of Redbox. We look at the lessons he learned from one of the fastest growing, competitive, and creative industries on the planet, and how those insights extend far beyond entertainment into all industries. We talk about disruption, success, innovation, and the importance of listening to your gut.

Q: How did you hone your craft as an entrepreneur?

[Mitch Lowe]: I love solving challenges and I’m curious. I see solving problems as a bit like a game – and the games I am most attracted to are consumer ones. If you can’t get the quality of the product or service…. If it takes too long… costs too much… if there’s transactional friction… I always feel like there must be a better way. If you love solving problems, that’s kind of where entrepreneurship comes from, and you hone your skills by bringing people and resources together around your vision and ideas to solve problems.

I think I learned it as a true skill from Reed Hastings at Netflix. He was just always looking for that hockey stick effect, and he would always tell me, and others, that you might get it 60% right, but go for the 100% right. And that might just be turning one other lever to the right or to the left. I’m fascinated by the analytics and data that businesses generate.  You can have all this data, but you’ve got to know which data is actionable and important.

Q: How do you know the problems that are worth solving?

[Mitch Lowe]: It’s hard to identify the right startup to invest in. Sometimes you can be passionate about a founder, sometimes (like Netflix) the startup might be solving a problem that didn’t exist. There wasn’t really a huge clamor for an easier way to get movies, from a bigger selection, or without late fees! Those were the three principles the company was started on. I don’t honestly think it’s about determining the potential of a company, but rather the adventure and execution of getting there.

Q: What is disruption?

[Mitch Lowe]: I define disruption as being where the incumbent players and incumbents somehow deny what their customers are saying or want differently. A disruptor comes in, sees a problem more clearly, and in some cases has more freedom to attack the problem. I’ve never gone into a startup thinking, ‘oh hey, I’m going to disrupt an industry….’ I go in trying to solve a problem, and if you can effectively solve a problem, you might end up disrupting a whole industry. You can’t just sit there and think, ‘I’m going to disrupt the automotive sales sector…’ you have to think more first principles, ‘you know what, the way people buy and trade cars sucks, there’s got to be a better way…’

Q: How important is storytelling in entrepreneurship?

[Mitch Lowe]: Whether you’re marketing a product or service, raising money, or working to motivate your team – you need a story that makes sense, that’s logical, and which resonates with all the constituencies who have a stake in your success, and you in theirs. It could be prospects, customers, investors, or employees. If you can keep all your constituencies bought-in and believing? Then you can accomplish anything.

Q: How did your mindfulness practice play a role in your career success?

[Mitch Lowe]: When you calm the mind and empty out your outside influences, you get more clarity, and you see the steps unfolding in front of you. It’s also important to acknowledge that whether you’re starting a company, or trying to solve a problem, you are going to face challenging moments. Having that calmness- having that place to go- being able to compartmentalize.

You don’t’ want to bring tough work home – when you mess up your home life, you lose your stability and this causes further challenges in your work-life, and vice-versa. Mindfulness helps you deal with inevitable challenging solutions and those situations where you’re ready to give it up and lose it all.

Mindfulness also allows you to sometimes keep that bigger picture in your mind, and not lose that strategic sight. It’s so easy to get lost in solving all the little things that pop-up in our lives, that we can forget about the bigger picture.

Q:  How do you rapidly evaluate individuals and build deep trust?

[Mitch Lowe]: It’s important to understand the motivation of the individual. If you can understand what their goals are in life, what they really want to accomplish…. Do they want more money? Do they want freedom? Do they want more time to themselves? Each role in a business is slightly different, and you need to match the needs of the business with the vision of the individual – and with the right rewards program. As a leader, you have to truly love, and be passionate, about each of your team members’ futures. You have to really care that they succeed. I remember at Netflix, after we went public, the parking lot changed from old Volvos and station wagons to Mercedes’ and BMW’s. That really made me happy; not the cars per-say, but the fact that all those families could now send their kids to school and college, who could now buy a nicer house, and follow the projects they want in life.

I also found that however senior we get, one of the constant factors in our own sense of worth is this underlying need to prove ourselves to our parents. There is a lot of research on high achievers and people who are comfortable with ambiguity which shows that they are driven very-much by a need to prove themselves to a mother or father, to show their worth. Even people who have made millions of dollars seem to need this validation from their parents saying, ‘okay, you’re successful!’

Q: What does success truly mean?

[Mitch Lowe]: Part of success is achieving the financial freedom that allows us to not worry about paying the rents, or our bills. That is not the only part of it. Everyone has their own definition of success; it could be a happy family life! Everyone has something different. It’s important to realise too that whenever you get to what you think is success, there’s always another step above that.

I guess the only thing I would say is if you get to the point to where you could comfortably believe that I could die tomorrow and I wouldn’t regret my life, I think at least for me, I think that’s where success would be. At least you knew you got there. What it is, I’m not quite sure.

[Mitch Lowe]: I study history and genealogy – I buy old maps from the 1500s and 1600s, and one thing that’s absolutely clear to me is that legacy lasts 50 years maximum. Thinking about legacy in timeframes beyond that is meaningless. If you’re doing anything for legacy, you might as well forget about it – even your great grandchildren will have no idea who you were or what you did. There are exceptions of course, but by and large legacies are meaningless. I’ve come to the conclusion that we’re here on Earth to have children, to help those children grow, to help them become good people, and to watch them have children, and so forth. We need to do whatever we can to make the world slightly better in the time we’re here.

Life is moving so fast now. It used to be 50–100-year cycles between great inventions. Now every year we have game-changing inventions and innovations. Companies are building and scaling almost unfathomably quickly. You might think you’re working on something utterly game changing, but there’s a chance that a couple of months from now, you will be totally superseded. Instead of thinking of legacy, we need to learn, read and talk to people and think about now about what we’re working on, and where this world is going.

Q: What are the big things we should be keeping our eyes on now?

[Mitch Lowe]: In the near future, close to 100% of our lives will- in some form- be connected to technology. This isn’t just about holding a device in front of us, but through technology, code and passwords embedded in our bodies. Everything we do will be- to some level- guided by AI, machine learning and VR. Today, we have close to the total sum of human knowledge available to us instantly, and we’re getting to the point where ecommerce knows what we want before we do! The metaverse is just part of this, as is the blockchain which will make transactions much more efficient and transparent. We will also be deeply immersed in media at all times, which is profound – each and every one of us, from our mobile handsets, will have access to powerful animation and production tools which previously were the domain of studios. It’s tremendously exciting time, change is happening very fast.