A Conversation with Richard Dawkins on Flight, Defying Gravity & Design by Evolution. 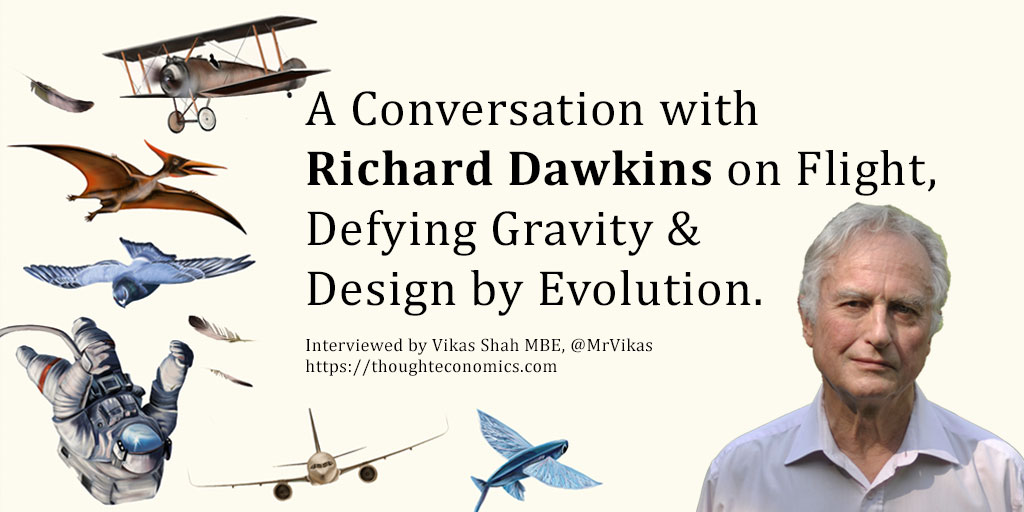 Have you ever dreamt you could fly? Or imagined what it would be like to glide and swoop through the sky like a bird? Do you let your mind soar to unknown, magical spaces?

Richard Dawkins is one of the world’s most eminent writers and thinkers. He has made a major contribution to public understanding of the science of evolution. He is the award-winning author of the Selfish Gene, The Blind Watchmaker, The God Delusion and a string of other bestselling science books, he is a Fellow of the Royal Society and of the Royal Society of Literature.

In his latest book Flights of Fancy, Richard Dawkins explains how nature and humans have learned to overcome the pull of gravity and take to the skies. From the mythical Icarus, to the sadly extinct but spectacular bird Argentavis magnificens, from the Wright flyer and the 747, to the Tinkerbella fairyfly and the Peregrine falcon. But it is also about flights of the mind, about escaping the everyday – through science, ideas, and imagination.

In this interview, I speak to Richard Dawkins about beauty, mythology, science, and culture of flight. We discuss the fundamentals of how nature took to the skies, and the extraordinary abilities (and mysteries) of flying species who navigate the world. We talk about human fascination with flight, and why the understanding of flight can help us open our own imaginations.

Q: Why did flight evolve?

[Richard Dawkins]: Flight is a very quick way to get from A to B. It’s also a very good way to escape from predators who are stuck on the ground. Many birds use flight to get away from mammal predators and flight is used for migration, often over huge distances. In some cases, the Arctic tern, for example, from the Arctic Circle to the Antarctic, you couldn’t do that on the ground.

Many birds search for food, birds of prey, look and flutter high and then hover and then pounce from a great height. Fishing birds at sea, small birds looking for new places to forage, for finding mates… we even know of moths that uses huge antennae to smell a mate miles away, flying upwind towards her.

The question to be asked is why doesn’t everybody fly?

Q: Why did species lose the ability to fly?

[Richard Dawkins]: If flight is so great, why do so many animals actually lose their ability to fly. Many birds, especially when they come to islands, shrink their wings over evolutionary generations; they originally used their wings to fly… but by accident, they land on an island and they find there are no predators there, or they didn’t need flight because they can find their food without it, and therefore their wings shrink.

All over the world you find, on islands, species of rail, species of pigeons, doves, the flightless cormorant on Galapagos… many species have lost power of flight. Birds have lost their wings and the power of flight. Queen Ants actually bite their wings off when they’ve used their flight for just one purpose, which is to get mated on the wing by a male also with wings. Queen ants lose their wings by biting them off and then burrow underground to start a new nest. So that is a dramatic illustration of the fact that wings are not always that good to have.

Q: Why has flight occupied such an important status in mythology?

[Richard Dawkins]: We have angels in mythology which fly everywhere, we have fairies, we have myths like the Greek myth of Icarus, we have Leonardo Da Vinci who was forever designing flying machines. It does have a great hold over our imagination. I feel it’s such a wonderful thing to be able to leave the tyranny of gravity to leave the ground and fly wherever you will.

Video games, places like Second Life, allow you the freedom to fly and it’s a wonderfully liberating feeling to get off the ground, in even virtual reality and take to the air. So I find it not at all surprising that it has such a hold over our mythology in our imagination and indeed our dreams when we’re asleep.

Q: Is the cultural status of flight linked to our urge to explore?

Richard Dawkins: We can certainly draw comparison with the great explorers like Vasco de Gama,  Columbus and the Vikings discovering America in Greenland. The urge to leave the planet and the urge to get into space is another example of exactly what you’re talking about. One of the reasons why we want to go into space is not just for scientific purposes, it’s to explore the mental way as well as a physical way.

Q: How are birds able to navigate such fast distances?

[Richard Dawkins]: Navigation is certainly problematic for very long-range flight whereas for short distances, birds can use rivers, coastlines and landmarks to help them. Homing pigeons are of particular interest because they can navigate home, having been driven in a car or a train to an unknown location and then released! So, they must know where they are. There is a magnetic compass which birds and insects do seem to have – alongside which they can use the sun as a compass. Which means they must have some sense of being able to correct for the apparent movement of the sun.

At night, flying birds use the stars which is a fascinating problem because to use the stars you have to know which star is which. In the Northern Hemisphere, we know about Polaris, the Pole Star. To find the Pole Star, you’ve got to know what other stars and constellations around… we use the Great Bear, the Plough (also known as the Big Dipper)… if you know where any of those are, you can find Polaris. Night flying birds must do something like that.

Birds are not born with an innate genetically determined knowledge of constellations. What they do has been brilliantly shown in an experiment by  Stephen Emlen (Stephen T. Emlen is the Jacob Gould Schurman Distinguished Professor of Behavioural Ecology at Cornell University and a world authority on the social behaviour of animals, particularly birds). Birds learn when they’re young to look at this night sky and learn which bits of the sky don’t rotate. Stephen Emlen reared birds in a planetarium, with an artificial night sky rotating around a different star and they treated that as though it was Polaris.

If you’re in the Southern Hemisphere, you don’t have the benefit of Polaris, but nevertheless you can see an empty hole in the sky which is surrounded by the rotation of the stars.

Q: Does the behaviour of birds reveal a more complex intelligence than we had otherwise expected from them?

[Richard Dawkins]: It depends on how you define intelligence. It doesn’t have to mean intelligence in the sense of being flexible in a way that human intelligence is. Flight and navigation do require a considerable level of computation but that we know happens anyway. An example is when you catch a cricket ball your brain is doing the equivalent of solving differential equations, but you do it unconsciously. It could be something like a built-in rule of thumb, that says, watch the night sky and work out which bits don’t rotate doesn’t necessarily require intelligence in normal sense.

Q: Did our early studies of flight inform how we (as humans) approach flight?

[Richard Dawkins]: Our envy of birds certainly helped drive our will to fly, however I think Leonardo was probably held back by trying to emulate the flapping of birds; that doesn’t work with human muscles. We had to free ourselves of the perception that you need to flap your wings and instead, switch to using a propulsive force… shooting you forwards fast (which is what propeller or jet engine does)… and then rely upon the wind rushing rapidly past the wings and over the wings and under the wings to lift you up. In some ways, emulating birds would have held us back – yes it would have given us the drive and motivation, but we had to forget about flapping to develop the combustion engine driven plane!

Crossing the Rubicon of flight has certainly made our world smaller, we’re able to travel with speeds which would have been unimaginable for most of humanity’s story.

Q: Are we the only species to engage in powered flight?

[Richard Dawkins]: Birds can fly fast and that is powered flight.  Soaring birds like vultures, eagles, and albatrosses have highly sensitive control of their flight surfaces taking advantage of updrafts, currents, and thermals – birds are extremely good at unpowered flight as well as powered flight.

[Richard Dawkins]: When you’re a spaceman, you are still under the influence of the Earth’s gravity – it’s still pulling you in, but you are whizzing around the Earth sufficiently fast that gravity cannot pull you in. Continuous falling is how you become weightless. As soon as a jumping flea leaves the ground, it is weightless. If you could imagine a flea sitting on a tiny weighing machine, it would weigh nothing during its trajectory. And in the case of a flea or a jumping spider, it’s a rather large trajectory in the air, relative to its size.

Q: Why are you fascinated with flight?

[Richard Dawkins]: As a biologist, flight interests me (along with everything else!). Flight in particular is of interest to me because it raises physics problems -how do you actually do it? It’s quite a difficult problem, to defy gravity!. The history of how I came to write this book, actually grew out of an earlier book that I wrote for children, called The Magic of Reality, in which each chapter begins with a question like, What is an earthquake?… Why do we have winter and summer… Why do we have night and day… What is the sun? Each chapter then answers that question first the myths, then with the true scientific answer.

When it comes to flight… It’s all about physics… how you solve the problems raised by physics, because physics is the same whether it’s for human machines or animals. It’s a fascinating parallel.

Up Next: The Reality of War: A Conversation with Bronze Star & Purple Heart Recipient, Benjamin Sledge