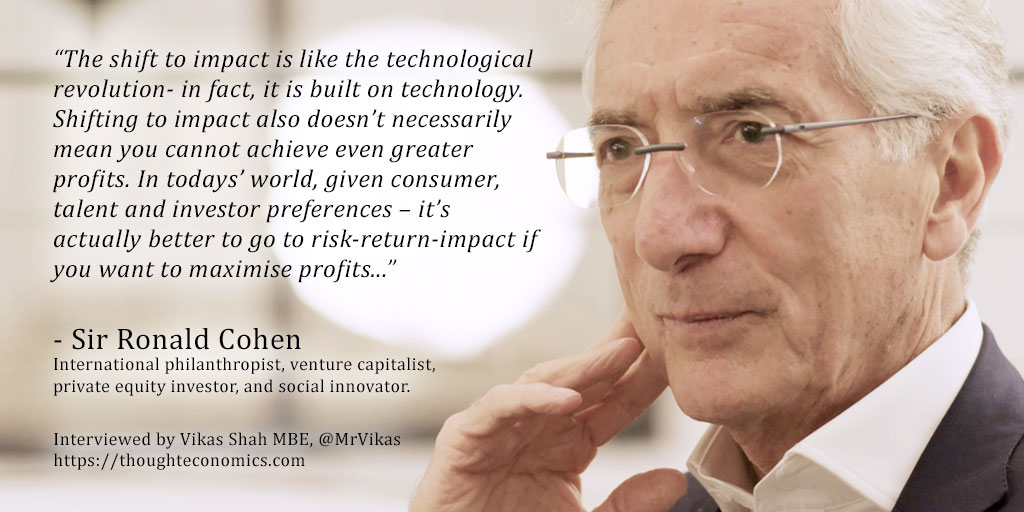 Throughout the world, capitalism and democracy are being challenged with great force. The world must change, but we cannot change it by throwing money at old ideas that no longer work. We need a new path to a new world where inequality is shrinking, where natural resources are regenerated, and people can benefit from shared prosperity. This is the world being created by the Impact Revolution.

Sir Ronald Cohen is a preeminent international philanthropist, venture capitalist, private equity investor, and social innovator, who is driving forward the global impact revolution. He is Chairman of the Global Steering Group for Impact Investment (GSG) (which succeeded the G8 Social Impact Investment Task Force, of which he was also Chair); Chairman and co-Founder of The Portland Trust; co-Founder of Social Finance UK, US, and Israel; co-Founder of Bridges Fund Management UK, US, and Israel; and co-Founder of Big Society Capital. Each of the initiatives he leads today aims to shift the allocation of human and financial resources to creating positive impact.

In 1972, he co-Founded what became Apax Partners Worldwide LLC, which he led as its Executive Chairman until 2005. Sir Ronald has served on a number of prominent investment boards, including the Harvard Management Company and the Oxford Investment Committee. He invests in profit-with-purpose companies and is an active global philanthropist, tackling issues ranging from Israeli/Palestinian peace-building to humanities and the arts. Each day, he strives to live by a simple principle: Do Good, Do Well!

In this exclusive interview, I spoke to Sir Ronald Cohen about the impact investment revolution, a fairer capitalist model, and how impact investors are tackling some of our world’s biggest challenges.

Q:  How did you find yourself in impact investment?

[Sir Ronald Cohen]: I became a venture capitalist because I wanted to help society by creating jobs at a time of high unemployment in the UK. At the time I set up my first fund (c. 1981), we had around 3 million people unemployed in the UK. As the years went by, I realised that while we were- indeed- helping people who came from nothing to make money, improve the lives of people around them, create jobs, financial value and wealth- the gap between rich and poor was getting bigger, not smaller. When I was 53, I told my partners that I would leave Apax at the age of 60 to devote my efforts to the taxing social challenges we face in society and to the peace process in the Middle East between the Israelis and Palestinians. I left Egypt as a refugee at the age of 11, married an Israeli and still speak both Arabic and Hebrew.

I was privileged to Chair the G8 taskforce from 2013-14 and it really brought home this shift from risk-return to risk-return-impact. Until then we’d seen social impact bonds as being an expression of this optimisation of those three dimensions (risk, return, impact) but we hadn’t fully appreciated that consumption was moving away from companies that were creating harm as consumers actively bought from productive companies whose values they shared. Investors were becoming aware of this, and you had investors with close to $40 trillion under management who signed-up to the United Nations Principles for Responsible Investment. Very few companies however were going in that direction… Today you see pressure from employees, consumers and investors who are pushing companies to optimise risk with impact.

This is transforming the whole of our economy and we are seeing more companies making decisions across those dimensions of risk-return-impact and being judged on the basis of the profit and impact they create. It really turns our economies away from risk-return (where they create profit without counting the huge damage they cause) to risk-return-impact (where impact is measured alongside profit and reflected in the value of companies).

Q:  How are companies handling the cultural shift to risk-reward-impact?

[Sir Ronald Cohen]:  The shift to impact is like the technological revolution- in fact, it is built on technology. Shifting to impact also doesn’t necessarily mean you cannot achieve even greater profits. In todays’ world, given consumer, talent and investor preferences – it’s actually better to go to risk-return-impact if you want to maximise profits. Businesses, however, are not used to thinking in these terms and new entrants will disrupt things. Tesla is the first cannonball to really fly. Elon Musk didn’t enter the automobile industry because it was welcoming of new entrants- he did so because he wanted to shift us away from the combustion engine to electric vehicles. I think you’re going to see impact models that challenge many of our incumbent industries. For example, in the financial services and banking sectors you’re going to see real disruption coming from new technological platforms that begin to look at banking and credit differently. The most vulnerable in our society are currently overcharged because the system assumes, they are higher-risk, and so those in our society who are least able to afford charges, are being charged huge overdraft and borrowing rates. Entrepreneurs can make inequalities like this a thing of the past.

This also extends to the policies governments have toward business. Once you have transparency on impact, why would you tax all companies for the damage caused by some? You would tax the ones who create the damage. I hope we therefore shift to a fairer taxation system that improves the position of governments. A lot of social issues that require governments to pay benefits are going to be dealt with through companies, and similarly- a lot of clean-ups of environmental damage that’s created by companies will land at the government doorstep.

Q:  How can we shift to a healthier model for capitalism?

[Sir Ronald Cohen]: One of the most significant breakthroughs in recent years has been the advent of big data. The Impact-Weighted Accounts Initiative which I’m privileged to Chair at Harvard Business School has started to account, in monetary terms, for the environmental and social damage caused by companies through their operations, employment and product. Companies have been making voluntary, inconsistent, disclosures around their environmental and social impact, but we’ve taken a deep dive into over 1,800 companies to understand this better.

The same is happening with diversity. Let’s compare Apple and Costco in the United States. Apple has 80,000 employees and are less diverse than they should be in their employment. They attract a $2.7 billion negative charge from an impact perspective because of that. Compare that with Costo who employ twice as many people but have a negative charge of around $1 billion.

If we start to transparently assess company behaviours, it can attract taxation, regulation and have a real impact in their ability to attract talent and even their stock market valuation. The data set on environmental already shows that companies that pollute more are worth less within several sectors.  So that’s the mechanism for reshaping capitalism.

Q: What is the role of philanthropy in the impact revolution?

[Sir Ronald Cohen]: Philanthropy is hugely important, but relatively small compared to the size of the financial markets as a whole. There’s just over a trillion dollars of money in the world’s philanthropic pool versus $200 trillion or more of investable assets. However, philanthropist are traditionally the ones who have done the things that governments are unable to do, cannot be seen to do, or should have done. They are flagbearers for the revolution, but they too will see their model disrupted. This is where the impact revolution started, with the social impact bond being designed to overcome the problem that charitable organisations face when financing themselves. The purpose of the social impact bond was to enable charities to raise investment money, grow, and have more beneficiaries. The idea was that you could remunerate investors on the basis of your performance in preventing (for example) young prisoners from re-offending, young girls dropping out of school in India or prediabetics becoming diabetics. That you could get paid according to your social contribution is a revolution that the philanthropic world has still not completely absorbed. We need to focus on outcomes not activities – funding the numbers of visits to prisoners isn’t as important as the outcome of getting prisoners to stay out of jail following release. Philanthropy must adopt these new methods to deliver greater impact, and that in-turn will enable a huge transfer of wealth globally.

Q: Do we need to change our financial accounting & reporting standards for impact?

[Sir Ronald Cohen]: We are going through a massive change in the way we use our financial accounts. The original purpose of financial accounts was to measure profit, but now there’s over $30 trillion of ESG and impact investment money too. ESG budgets often have the cash to create impact, but without measurement whereas impact investment is centred around measuring that impact. Be that as it may, 30 trillion or more of money is going now to achieve impact as well as profit, and yet we don’t have transparency on that impact.

The data revolution has enabled us to prove that we can measure- in financial terms- the impact of companies and reflect those values in their financial accounts. The world is going to shift to looking at impact weighted profit. A company which is losing money (if you take into account impact and profit) is going to be valued less than a company which is delivering both impact and profit. That is where regulators will have to step-in to ensure every company publishes- on a statutory basis- their impact in monetary terms.

There is an interesting parallel here with 1933, when we introduced the GAAP (generally accepted accounting principles). Until then, there had been no real transparency on profit! Companies chose their own accounting principles, and nobody verified their numbers. After the Great Wall Street Crash of 1929, investors sat-up and said ‘hey, this is crazy!’ and they got transparency through the adoption of GAAP. We are now at the same crossroads, with impact.

[Sir Ronald Cohen]: My hope is that the world will come to realise that doing good and doing well are not in opposition, and then effectively- with the change in values we’ve been talking about- can begin to contribute to solving the big challenges we face, environmentally and socially.  If I contributed in some small way to making that happen, I’d feel very good about my life.

Up Next: Investing in China