Close Search ×
Order the Book Subscribe Free
A Conversation with Stephen A. Schwarzman, Chairman & CEO of The Blackstone Group

A Conversation with Stephen A. Schwarzman, Chairman & CEO of The Blackstone Group 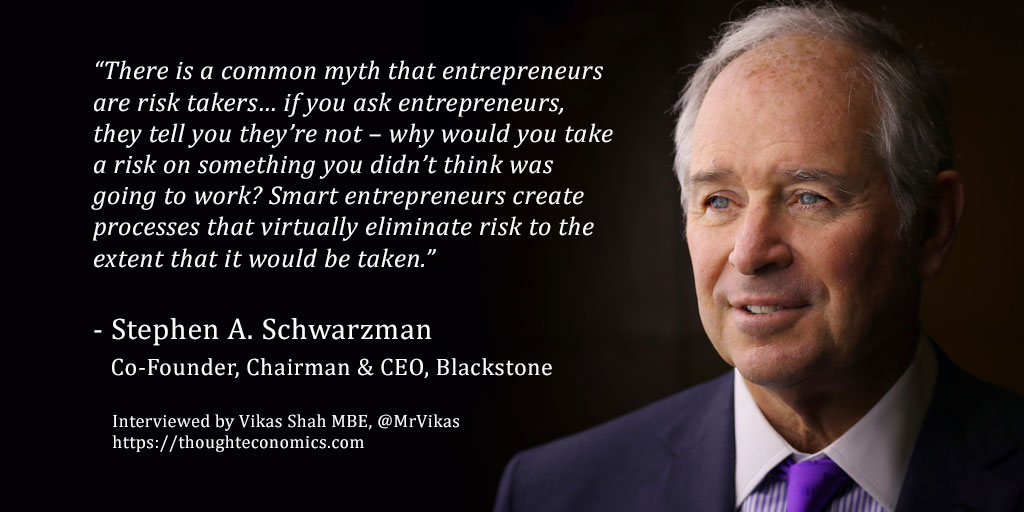 In early 1985, Stephen A. Schwarzman and (his then mentor), Peter G. Peterson  took three thousand feet of space at the Seagram building just north of Grand Central Station (New York).  They had each put $200,000 in capital, bought some furniture, hired a secretary and got to work launching a business they had spent months planning, a distinct firm comprising M&A, buyouts and new-business lines, with a culture to attract the best people, and a unique way of providing extraordinary value to their clients. As Stephen notes, “We were hitting the market at the right time and had the potential to be huge.”

The business they launched was Blackstone.  Thirty years later, the firm now has over $545 billion in Assets Under management and over 2,500 employees in 24 offices worldwide.  Blackstone portfolio companies employ over 400,000 people worldwide, and Stephen has become not only one of the world’s wealthiest entrepreneurs, but an incredible philanthropist.

In his 2019 book, What It Takes: Lessons in the Pursuit of Excellence, Stephen uses impactful episodes his life to show readers how to build, transform, and lead thriving organizations.  I caught up with him to learn what it takes to build a successful organisation at scale.

Stephen A. Schwarzman is Chairman, CEO and Co-Founder of Blackstone, one of the world’s leading investment firms with $545 billion Assets Under Management (as of June 30, 2019). Mr. Schwarzman has been involved in all phases of Blackstone’s development since its founding in 1985. The firm has established leading investing businesses across asset classes, including private equity, where it is a global leader in traditional buyout, growth equity, special situations and secondary investing; real estate, where it is currently the largest owner of property in the world; hedge fund solutions, where it is the world’s largest discretionary hedge fund investor; and credit, where it is a global leader and major provider of credit for small, middle-market and other companies. Blackstone has also recently launched major new businesses dedicated to infrastructure and life sciences investing, as well as delivering the firm’s investment management expertise and products to insurance companies.

Mr. Schwarzman is an active philanthropist with a history of supporting education, as well as culture and the arts, among other things. In both business and philanthropy, Mr. Schwarzman has dedicated himself to tackling big problems with transformative solutions. In October 2018, he announced a foundational $350 million gift to establish the MIT Schwarzman College of Computing, an interdisciplinary hub which will reorient MIT to address the opportunities and challenges presented by the rise of artificial intelligence, including critical ethical and policy considerations to ensure that the technologies are employed for the common good. In 2015, Mr. Schwarzman donated $150 million to Yale University to establish the Schwarzman Center, a first-of-its-kind campus center in Yale’s historic “Commons” building, and also gave a founding gift of $40 million to the Inner-City Scholarship Fund, which provides tuition assistance to underprivileged children attending Catholic schools in the Archdiocese of New York. In 2013, he founded an international scholarship program, “Schwarzman Scholars,” at Tsinghua University in Beijing to educate future leaders about China. At over $575 million, the program is modeled on the Rhodes Scholarship and is the single largest philanthropic effort in China’s history coming largely from international donors. Mr. Schwarzman is Co-Chair of the Board of Trustees of Schwarzman Scholars. In 2007, Mr. Schwarzman donated $100 million to the New York Public Library on whose board he serves.

Mr. Schwarzman is a member of The Council on Foreign Relations, The Business Council, The Business Roundtable, and The International Business Council of the World Economic Forum. He is a former co-chair of the Partnership for New York City and serves on the boards of The Asia Society and New York-Presbyterian Hospital, as well as on The Advisory Board of the School of Economics and Management at Tsinghua University, Beijing. He is a Trustee of The Frick Collection in New York City and Chairman Emeritus of the Board of Directors of The John F. Kennedy Center for the Performing Arts. In 2007, Mr. Schwarzman was included in TIME’s “100 Most Influential People.” In 2016, he topped Forbes Magazine’s list of the most influential people in finance and in 2018 was ranked in the Top 50 on Forbes’ list of the “World’s Most Powerful People.” The Republic of France has awarded Mr. Schwarzman both the Légion d’Honneur and the Ordre des Arts et des Letters at the Commandeur level. Mr. Schwarzman is one of the only Americans to receive both awards recognizing significant contributions to France. He was also awarded the Order of the Aztec Eagle, Mexico’s highest honor for foreigners.

He is also the Former Chairman of the President’s Strategic and Policy Forum, which was charged with providing direct input to the President of the United States from business leaders through a non-partisan, non-bureaucratic exchange of ideas.

Q:  What does excellence mean to you?

[Stephen Schwarzman]:  Excellence means you do the absolute best you can in every situation that you face.  It’s an aesthetic concept, a performance concept, and helps you create the most perfect balance for success.

Across our business, we encourage people to be the best in the world at what whatever they choose to do – to find the unmet need or situation that they can bring all the relevant factors to, and to capitalize on that.

Excellence is almost a tactile feeling – and it starts with a vision… sometimes a vision that shows you a path that’s so good that it cannot not succeed.  It’s this type of vision that gets people to act, to bring their resources, and experiences… The end result? Everybody gets something… great performance for customers, a great career opportunity for the people working on the idea, a great outcome for the organization or investors…. That’s all part of excellence.

Q:  What are the key aspects to successful negotiation?

[Stephen Schwarzman]:  I’ve always felt negotiation is pretty-easy.  You have to look at any situation from the perspective of all sides, and find a zone of fairness in between.  Usually, before you even start the exercise – you have to know what that is, and whether the other side is out of the zone… do they (for example) want a much higher valuation that is reasonable and fair? If so, there is no negotiation to be had. Whatever you put on the table should be within this zone of fairness (whether at the bottom of the zone, which is good for you… or the top of the zone, which is better for them but still acceptable for you).  I’ve always felt it’s important to get to this point as soon as possible in a negotiation, and articulate what you think is fair and what isn’t.  It’s also really important to understand why the person you’re negotiating with believes what they believe, and make sure you encourage them to put that on the table – it can avoid difficulties, and also can explain why there are blockers, difficulties and even things which may have been missed.  Speed and pace are important – the circumstances that brought people to the table can change over time, nothing is forever, nothing is static.

Q:  How do you build resilient teams?

[Stephen Schwarzman]:  Success really is a team sport.  There are very few successful people who competed the journey solo, and figured out how to do everything themselves.  Most people learn from others, learn from situations, and learn for life.  I believe that you have to keep asking questions, and that there’s no such thing as a negative question.  It’s all learning.

Everyone in a high functioning organisation is simultaneously a teacher and a student.  They will have been taught by others, and will be teaching others.   This is way more efficient than struggling through to find an answer and reinventing the wheel when you could, in fact, have just bought a tyre… it’s essential to have teachers, mentors, to show you the way forward.    There is in fact the sort of caricature of that lone successful person touching no-one and just being a genius, that’s actually inaccurate in the vast majority of cases.

You have to also make sure your team is physically and mentally resilient, and has the motivation to always look forward to the next opportunity with a winning mentality.

I don’t look backwards and try and figure out a picture of myself.  That doesn’t mean I’m a non-reflective person, but rather that I believe in moving forwards, rather than looking back.

Up Next: A Conversation with Mitchell Baker, Chairwoman of Mozilla