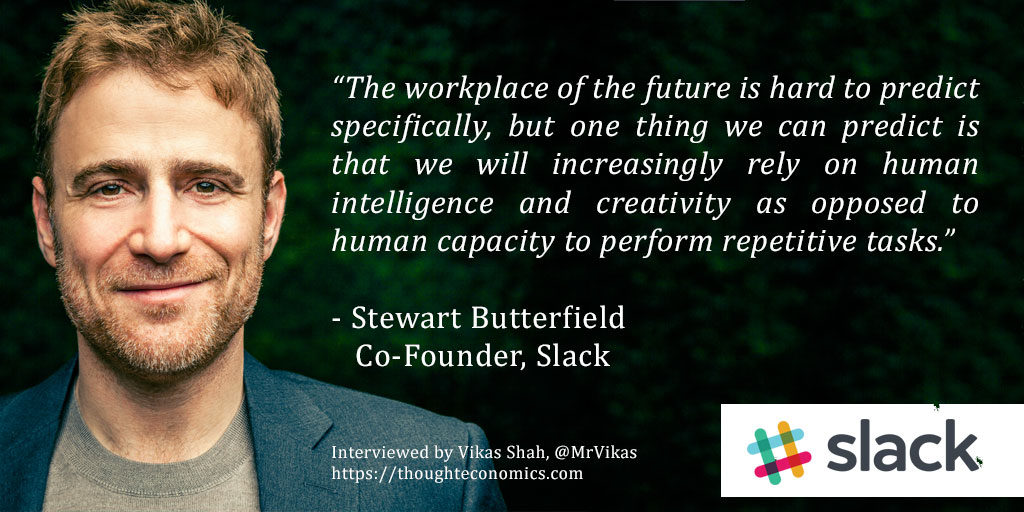 As industries have changed, the nature of work and the workplace has transformed.  Mercantilism during the renaissance began a trend, exploding during the era of the East India Company and continuing with the ascendance of the corporation, and information economies.  What we need from each other as employees, co-workers and leaders has changed, and with that what we need of our workspace has changed too.

I remember travelling in Asia during the earliest days of my business career where young people were employed as messengers, with a specific purpose of ferrying written messages between individuals in companies.  More recently, I have mentored startups- often with dozens of employees- all of whom are based in different global locations, and a mix of offices, homes and co-working spaces- all collaborating and working together using state of the art technology and platforms.

Slack is leading this revolution.  Launched in 2014, they are the fastest growing business application in history- allowing millions of people in tens of thousands of organisations around the world to get work done.

I caught up with Slack Co-Founder, Stewart Butterfield to learn more about his entrepreneurship journey, and the changing global workplace.

Q: How did entrepreneurship come into your life?

[Stewart Butterfield] I grew up around two entrepreneurial parents, and so business was always around me.  I played entrepreneurial games like Oregon Trail, had my own lemonade stand, and   when we lived near a beach, I bought hot dogs from our local 7/11 and sold them on the beach for a profit!

That’s what entrepreneurship is all about–experimenting and finding a way of achieving some goal in the context of business. It’s something I’ve always found fascinating.

Q: How do your journey start with Slack?

[Stewart Butterfield] I would love to say that we knew all the answers in advance, but the truth is that we discovered our product and opportunity, rather than planning for it. We started a company to build a massively multiplayer game, and in the process, it very quickly became apparent to us what the utility of Slack was as we used a prototype to collaborate internally.

When we first started I don’t think we realised the scale of the opportunity; in fact, we pitched investors that we hoped to achieve $100 million per year in revenues at our fullest potential. We blew past that last year.

We’re constantly coming to a better understanding of the scale of our opportunity, and after finding the product market fit was as good as it gets, we have been progressively re-evaluating our understanding and expectations for it.

Q: Why does our modern hyper-connected workplace feel lonelier, and more isolated than ever?

[Stewart Butterfield] Fundamentally, it’s really hard to work on intellectual and complex projects collaboratively. To give you some context, only a handful of businesses since 1900 had achieved the scale necessary for this to be a problem; The Hudson Bay Company, East India Company and their peers. Apart from them, most businesses were a single merchant, with maybe one or two people, – who broke down complex tasks into small pieces.

That approach then informed the way that larger companies such as General Electric and Ford broke complexity down into simple, repetitive tasks for their production line.

Complexity is underestimated, even by the people who are in the thick of it. There’s a lot of anxiety or even resentment towards the tools and process of business that manifests in satire with shows like ‘The Office’, the movie ‘Office Space’ or the cartoon ‘Dilbert’. These satirical representations of the office show a ‘dumb’ workforce, but they don’t explain that in reality, businesses are massive, complex and intellectually challenging. We simply need people to be able to communicate effectively through those challenges.

[Stewart Butterfield] We often get unexpected bits of feedback from people using Slack that we never would have anticipated in advance. Things like: ‘I’m very introverted. Before we started using Slack, I felt like I didn’t have a voice in a lot of conversations, because I like to take a little bit more time to formulate my thoughts. Our meetings are very fast paced and people are constantly interrupting each other. Now that some of the decision making has moved to Slack, I have a chance to participate’.

Giving people sufficient context to understand how people are making decisions is incredibly powerful and impactful.

Slack enables this by giving transparency: conversations move into channels, which are accessible by different people at the same time. To someone in the Marketing team can see what the Sales team is assessing, and weeks and months later you can search and find this conversation and develop a deeper understanding.

A lot of that feeling of alienation that you see in The Office, Dilbert, and so-forth is driven by people feeling that they don’t understand context, and ultimately decisions don’t make sense.  They don’t really get the motivation and therefore feel frustrated or disempowered.

Technologies like Slack can be an instrument for leadership, to help achieve shared vision and goals.  We create that overlap in the interests of the executives and increase the level of transparency for. better understanding and autonomy around decision making.

[Stewart Butterfield] It’s possible to have software augment our ability to accomplish complex tasks, and the clearest, simplest, most powerful example of that in our history is the invention of the spreadsheet.  The spreadsheet was such a massive step forward for finance, accounting and sciences.  It changed everything.

At Slack, we’re building something that’s meant to augment the way in which a group of people, a team, works together.  We’re not trying to solve one specific problem for one class of worker, or one domain of expertise, but build a very broad tool that ideally augments the way people communicate.

Computers have an infinite amount of patience, can do many things simultaneously, have perfect memories (unlike humans), and can compare massive sets of data in a way that is just not cognitively possible us to do. These capabilities can hugely assist and augment humans’ ability to collectively understand one another.

At school, I was just at the cusp of the change where it became not just recommended but mandatory that you bring a calculator into the math class.  We started doing math that was more complicated.  We still had to learn addition and subtraction and long division, but as we developed a more sophisticated understanding, we realised we could control these tools that saved us a lot of repetitive work.

You’re starting to see this kind of change more and more in offices; they don’t happen all at once; not even quarter by quarter or even year by year. They often happen decade by decade.

The workplace of the future is hard to predict specifically, but one thing we can predict is that we will increasingly rely on human intelligence and creativity as opposed to human capacity to perform repetitive tasks.

Q: Can technology help us to become better leaders?

[Stewart Butterfield] If what you’re trying to do is get a large group of people to cooperate on a very complex problem, there’s a higher degree of alignment that’s required.  However, if what you try to do is drive an assembly line to greater efficiency, it’s be very much command and control.

The complexity of modern enterprise scale businesses mean that one individual simply can’t keep the whole thing in their head; it’s too complex.  There needs to be a lot more human-level finesse: getting people to that part of alignment and consciousness so that teams can accomplish complex tasks.

Q: What are your views on startup culture?

[Stewart Butterfield] The notion of what constitutes a startup is more varied than people think. People use the phrase to apply to brand new businesses to the likes of Google and Facebook, two of the most valuable companies in the world.

If there’s one thing that thematically aligns all startups: a tolerance for innovation in how the companies are run. This means there’s a little bit more risk taking and attacking problems in a way that hasn’t been done before.

There’s no point starting a company to do things exactly the way an established competitor does, because you simply can’t be as successful. You have to do something different, and be much more willing to experiment with approaches to management and company structure.

Q: How has your leadership style changed as your company has scaled?

[Stewart Butterfield] Scaling up is incredibly challenging; it’s definitely been the hardest part of my own entrepreneurship journey.

We found ourselves in the incredibly fortunate strategic position of having obvious product/market fit, and the opportunity to scale. We now have over 50,000 paid teams, and 2 million paid users, all over the world, across all different industries. The challenge for us has been managing the organisation so that we can best take advantage of the position that we’re in.

It’s the same for the leader as it is for all of the people working in the company.  You might be familiar with The Peter Principle, which states that people are promoted to the level of their incompetence. It’s exactly the same in the real world: if you’re good at your job, it leads to advancement in your career, and then you don’t get to do those things anymore that made you deserve that advancement.

Hopefully I’m still competent to do my job, but my talents that contributed to our success in the early days are employed much less frequently. A different set of skills is called upon.

I can turn to a lot of much more experienced people for advice, guidance and mentorship but our challenge is unique.  No one has ever done this before.

Up Next: War and Peace