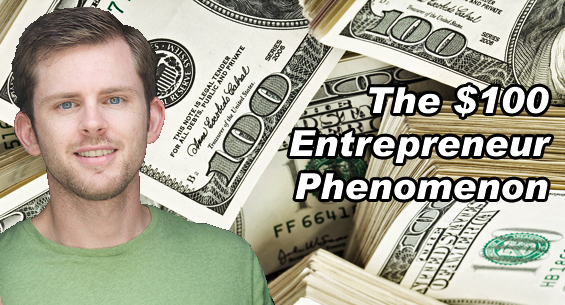 An Interview with Chris Guillebeau, author of the $100 Entrepreneur

As the FT reported in January 2012, “…in the United States and other developed markets, SMEs commonly account for half or more of gross domestic product…. A recent study from the European Commission indicates that SMEs generated 85 per cent of all new jobs in the European Union from 2002 to 2010…”  In an April 2012 interview with this site, Prof. Mark Hart (who heads up the Global Entrepreneurship Monitor – GEM) further underlined this stating, “…It’s clear to me that small businesses, particularly micro-enterprises, have been responsible for the majority of the gross job creation in the last five years… particularly through the recession….“

Even more astonishing is the fact that most of these businesses are (as the description suggests) small.  The overwhelming majority are owner managed with only a handful of employees.  Some will grow and scale to become huge enterprises, but in the main these are businesses which scale to a size where they’re sustainable and continue to provide a good income for their owners and employees.  Another critical characteristic is that many of these enterprises cost very little to start meaning that for under $1,000  – people can become entrepreneurs.

To learn more about the phenomenon of micro-enterprise, I spoke to Chris Guillebeau, author of the $100 Startup.

Chris is a writer, entrepreneur, and traveller. During a lifetime of self-employment and ventures ranging from online publishing to volunteer work in West Africa, he has visited nearly every country on earth before the age of 35. Host of the World Domination Summit, an international gathering of creative people, Chris is focused on encouraging individuals to live fulfilling lives with inspiring and practical advice.

Q: Why do people become entrepreneurs?

[Chris Guillebeau] For a variety of reasons! I think some people are drawn to the independence of owning a business.  I was… I wasn’t a very good employee and wanted to make my own way.  In the early days, my motivations weren’t necessarily about building a company or changing the world- I just needed to find a way to pay the bills….

Many people also enter entrepreneurship because of a transition or shock.  A lot of people we talked to in the $100 Startup had been laid off or weren’t able to find a job in our difficult economy.    A lot of people also never intend to become entrepreneurs but stumble into it.  They may have some kind of hobby, skill or passion… and discover that other people are willing to pay for it.

Q: Are there any common threads to creating a successful business?

[Chris Guillebeau] I think it’s about usefulness! People talk of ‘following your passion‘ but there are plenty of things people are passionate about that nobody will pay them money for, so you can’t just tell someone to just follow their passion.  Many entrepreneurs have though, built businesses around things they are passionate about.  The missing piece? usefulness…

We say the magic formula is: Passion + Usefulness = Success.  You may have to go through a number of ideas to find the one that meets this formula, but when you do, that’s when success comes.

Q: What are your views on the fact that many people don’t start a business as they feel handicapped by finance?

[Chris Guillebeau] I think that’s the wrong perspective.  It depends, of course, on what kind of business you want to start.  If you need a manufacturing facility or if you want to build a new automobile… then you’re going to need financing… but most of the businesses we looked at are micro-businesses and didn’t need financing.  They didn’t… in general… need more than $1,000 to start and in many cases required less than $100.

Entrepreneurs have to focus on how a business makes money and focus on that rather than the expense side of the business.  That also allows you to start quicker and instead of deferring your idea, you could get to market in 30 days.

We can now relate to people all over the world and get to market really quickly.  The increase in confidence over online shopping has made a huge impact too.  This trend started in North America but is now present worldwide.   When I was first working online, some 14 years ago, I had to spend over $150 on a domain name… figure out where to host it… and then realise that people were uncomfortable with their credit cards and so on.  Now a domain name is a few dollars and you can host your site for free. You could generate traffic in 24 hours, and sell within a week.  It’s incredible.

Q: Are there any attitude hurdles that stop people starting businesses?

[Chris Guillebeau] There’s certainly a perception that to start a business, you have to write a 60 page business plan… put together a finance proposal… and be prepared to ask 10 banks for money and be turned down and so on.  We hear a lot of stories just like this through the news and media.

In reality, I think people don’t know what ‘the next step‘ is.  There’s a lot of people who want to strike out on their own, but don’t know how to do it.

Q: Is there a role for mentoring in starting a business?

[Chris Guillebeau] I think there’s a role for learning.  You can learn through mentoring, independent study or- most importantly- through the doing.  You learn a lot through trial and error- hopefully more trial than error I might add!

Q: Are there any common mistakes that start up businesses make?

[Chris Guillebeau] The most common is deferring action and getting stuck in paralysis… The second most common is finance… Investing too much in unproven concepts for example.   People can, and should, start their businesses as micro-enterprises to test their concepts and reduce risks.

Q: Are there any common growth strategies employed by businesses you’ve spoken to?

[Chris Guillebeau] I think it’s much easier to grow a micro-business than start it.  Once people got to a certain number… which varied depending on industry…. but say $1-2,000 per month – there’s lots of things you can do to grow that business.  You can reach more customers, sell more to existing customers through up-selling and through reselling products.   For product based businesses many must also consider whether there is a service they can offer to complement it.  A lot of people have product based businesses and don’t realise that their customers want personal help using the product.  The same works the other way round… Many customers of service based businesses just want it ‘boxed‘ and simplified.

Q: What are your views on the attitudes to entrepreneurial failure in society?

[Chris Guillebeau] One of the things I’m interested in encouraging people to think about is the whole area of risk.  What really is risky?! In many ways I think it’s actually much safer to take things into your own hands rather than trusting your destiny to an uncertain jobs market.

If we consider failure… I am interested in reducing the possibility and effect of failure.  If you don’t spend a lot of money on something and it doesn’t work out… is it really a ‘failure’?  Most entrepreneurs start a lot of different ventures.  Some work better than others, but that’s totally normal and expected.  If one thing doesn’t work out- it doesn’t mean that you are  failure.  Your reputation is created on all the things you do.

Over the last decade ‘entrepreneurship‘ as a concept has evolved from being something simple into a complex and jargon-rich world generating such an overflow of information that many people feel too overwhelmed to participate.

The fact is… entrepreneurship is simple… it is something that people have been doing since practically the dawn of civilisation… it has simple rules, simple outcomes and very few barriers to entry.  Technological change has also created an environment which, more than any other time in history, makes it viable for practically everyone to be an entrepreneur of some sort.

So why aren’t more people turning to entrepreneurship?  As Chris identified in our conversation, it’s not for the lack of will – a lot of people want to start their own business!  It’s knowing what the ‘next step‘ would be in the journey.

Fortunately… as with most things in business… the answer to this question is simple.

Up Next: Understanding Game Changing Technologies